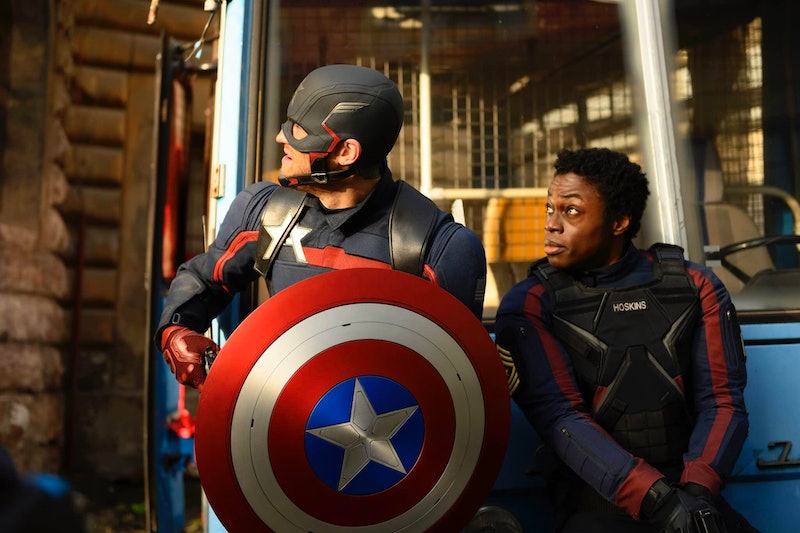 Spoilers ahead for The Falcon & The Winter Soldier Episode 4. Though super-soldier serum has been a fixture in the MCU since its inception, the most recent episodes of The Falcon and the Winter Soldier explored its implications in an especially in-depth, philosophical way. As Zemo cautions in Episode 4, “the desire to become a super-human cannot be separated from supremacist ideals. Anyone with that serum is inherently on that path.”

We know from Captain America: Civil War that Zemo has a pretty personal grudge against all things “super,” but he’s not totally wrong. At the end of the episode, John Walker channels his newly serum-equipped strength into an extreme display of violent rage, using Captain America’s shield to murder Karli’s fellow Flag-Smasher after she killed Lemar. Did the serum make him do that, somehow, or simply exacerbate the evil already within him? Here’s what we know about how the super-soldier serum operates in the MCU so far.

It Worked Really Well... Once

At its best, the super-soldier serum should be able to enhance a person’s inner self, giving them the strength and stamina to carry out their core values. The clearest example of this is Steve Rogers, who has always wanted to help others (even selflessly throwing himself on top of a grenade during military training) and was an incredibly loyal friend — qualities that he only doubled down on when empowered with super-strength. In Captain America: The First Avenger, we get a close look at how the first successful super-soldier experiment came to be: Abraham Erskine injected Steve with the serum and subjected him to vita-ray radiation to produce a physically enhanced man free from asthma, more than double his old weight, and nearly a foot taller. He can pack a punch (and take one) and move incredibly fast. It’s the Captain America we came to know and love — but not every serum story was as sweet.

Red Skull was the infamous result of a botched self-experiment (to be fair, he wasn’t a great guy like Steve). In Falcon, it’s revealed that Isaiah Bradley also received the serum — instead of suffering physical side effects, though, he was jailed and experimented on for merely being strong, the same trait Steve was lauded for. And of course, it’s implied that Bucky received a version of the serum during his captivity under Zola. It’s not what brainwashed him into being an assassin, but it was a means of weaponizing him. So all in all, Zemo has a point: Steve might be the one good exception to the serum’s dangers.

As Erskine told Steve in The First Avenger, the serum simply amplifies what you have inside. It’s an idea echoed by Lemar Hoskins, who says in Falcon Episode 4 that “power just makes a person more of themselves.” There are several different kinds of super-soldier serums out there, so we don’t know if Wilfred Nagel’s version (the one that Karli and Walker have used) is different. Maybe it can cause violent tendencies. But in all likelihood, it works in roughly the same way previous serums have. After all, Walker admits that “the things we had to do in Afghanistan to be awarded those medals felt a long way from being right,” so it’s not as if he was morally above board up until his violent outburst.

In a sweet, private moment of vouching for his friend, Sam tells Zemo that having the serum doesn’t make you inherently evil or a supremacist; it’s in Bucky’s blood, and the former Winter Soldier has bounced back from some very dark stuff. But just as the serum can amplify one’s inner self, it has amplified the central conflict in Falcon: that Walker is no Captain America, and he needs to be dealt with ASAP.

More like this
Netflix Shut Down 'Bridgerton' S3 Rumours About A “Very Dark” Storyline
By Bustle
Here’s Everything Coming To & Leaving Netflix In February
By Jake Viswanath
Pamela Anderson’s Dating & Marriage History Could Be Its Own TV Series
By Jake Viswanath
Bill & Frank’s 'The Last Of Us' Episode Has Twitter Emotionally Wrecked
By Alyssa Lapid
Get Even More From Bustle — Sign Up For The Newsletter
From hair trends to relationship advice, our daily newsletter has everything you need to sound like a person who’s on TikTok, even if you aren’t.