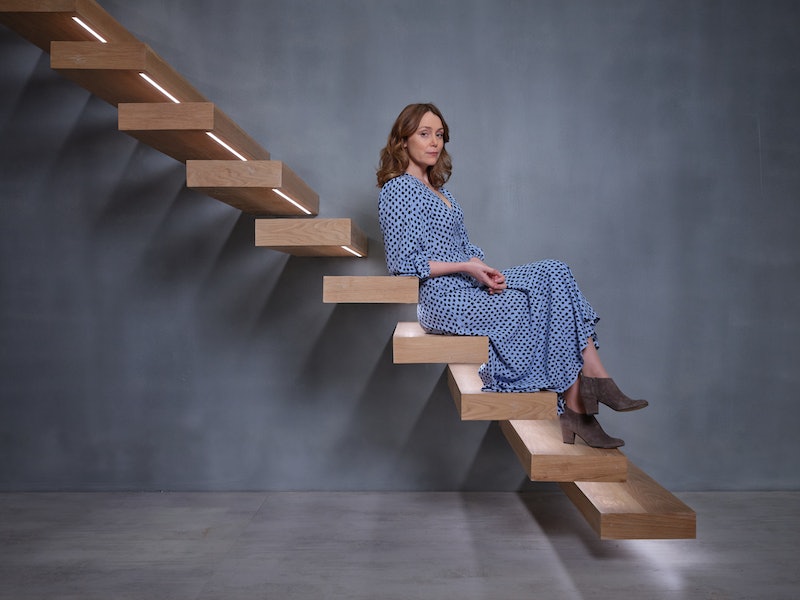 Spoilers ahead for ITV's Finding Alice. A night after moving into their dream smart house, Alice (played by Keeley Hawes) finds her husband dead at the bottom of the stairs. Finding Alice seems like the classic whodunit at first glance, but a lot can happen over six episodes. So, did Alice's husband Harry fall or was he pushed down the stairs? It's a central question in the new series, so let's dig in.

Alice is a prime suspect for pushing her husband from the get-go, despite not hearing or seeing Harry fall. The police arrive and notice there's CCTV pointing directly to the scene of the crime, though Alice is adamant the cameras weren't turned on. Without this evidence, the inspectors initially rule Harry's death as accidental.

However, when bruises are discovered on his upper arms during the post-mortem, things change. Suspicion again falls on Alice and the other person in the house at the time, her daughter Charlotte. Two other suspects emerge in the form of Harry's business associate Tanvi and Harry's sister Nicola, but they're ruled out pretty fast.

Then things get even more interesting when a mysterious man shows up claiming to be Harry's son George. George only recently found out Harry was his biological father, and came to their house that night to talk with him. At this point, Alice and Charlotte have already discovered that the CCTV was in fact working, and that there was a man standing on the stairs with Harry who looks suspiciously like George. Alice confronts him, and he says that Harry "lost his footing" while they were talking and fell. George says he panicked once he heard Alice approaching and fled.

So the lack of bannister is technically the killer then, right? Well, sort of. But it turns out George wasn't 100% honest about the conversation with his father.

Charlotte looks at the CCTV footage again, realising that George was holding his phone during the conversation in question, potentially was recording what happened. Alice has the opportunity to steal his phone during a family get-together and discovers that there is a recording and that George had been have a full-blown row with Harry right before his death. Their chat got pretty heated, and George can be heard harassing and threatening his father. Harry can then be heard staggering and falling, as if in reaction to George's threats. Are the two connected in some way? And if so, how? Things are still a little hazy on that front, sadly.

The series ends with George hacking into the smart house, watching Alice and Charlotte and messing with the controls. There's totally the potential for a second series, and there's definitely more to be discovered with this George situation. Either way, this show really does highlight the danger of having a staircase with no bannister.

More like this
Turns Out George Clooney Is A Huge Fan Of This Classic British Game Show
By El Hunt
6 'Happy Valley' Easter Eggs You May Have Missed
By Sophie McEvoy
'Consent' Is Not Just One Person’s Story, But Hundreds
By Shahed Ezaydi
Wait, Is 'Happy Valley' Not Actually Over?
By Darshita Goyal
Get The Very Best Of Bustle/UK
Sign up for Bustle UK's twice-weekly newsletter, featuring the latest must-watch TV, moving personal stories, and expert advice on the hottest viral buys.