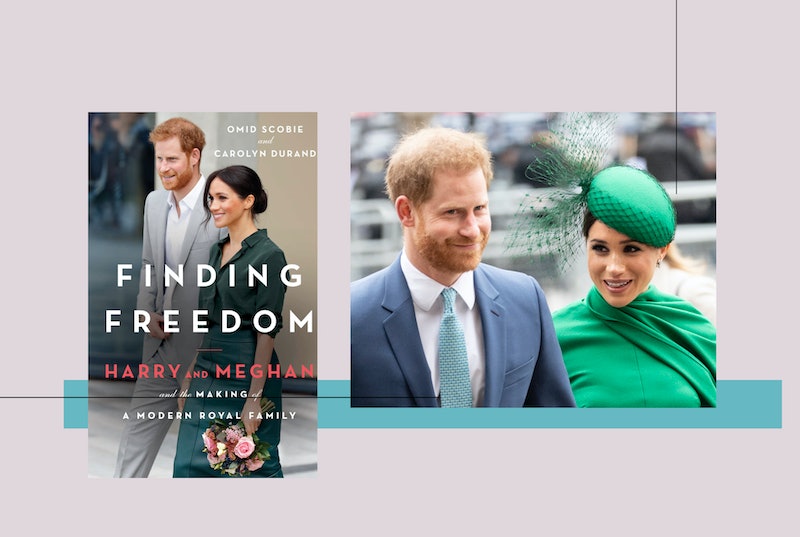 Royal reporters Omid Scobie and Carolyn Durand have more than 20 years' worth of combined experience covering the British royal family, but none of it prepared them for the sea change that followed Meghan Markle's introduction into the monarchy. "It was a very exciting period in time for both of us," Scobie tells Bustle. Traveling with the royal couple, he was particularly struck by Markle's effect on young women. "[We went to] the most remote parts of Australia and met young Aboriginal girls, and we heard them talk about how seeing a woman [of color] in the House of Windsor that they could finally identify with was really exciting." It's those intimate, behind the scenes encounters with Meghan and Harry that inspired their new book Finding Freedom.

While many celebrated their relationship, the nontraditional pairing of a British royal and an American actor spurred a frenzy in the press. In 2016, Harry released a statement decrying "the smear on the front page of a national newspaper; the racial undertones of comment pieces; and the outright sexism and racism of social media trolls and web article comments." Today the media continues its dogged coverage of the couple as they transition into their new life in Santa Barbara, California after rescinding their royal duties, with some even blaming Meghan for what they see as her tearing apart the British royal family. But according to Schobie and Durand, that's not an accurate portrayal of the Harry and Meghan they've come to know.

"Harry and Meghan seem very different in the pages of some of the British tabloids compared to the people we saw in front of us," Scobie explains of his and Durand's decision to co-author an authoritative account of the Sussexes' storied relationship. "The people close to them felt that people weren’t getting to know who they were. This was a chance for us to perhaps set the record straight on a number of things, and that’s really how the book came about."

The result is a sympathetic portrait of the couple, from their first date to their first days free from the monarchy, all drawn from the accounts of more than 100 people close to them. (Harry and Meghan did not contribute to Finding Freedom themselves.) Below, Scobie and Durand discuss the challenges of reporting out the book, the ways racist press coverage contributed to its creation, and how Harry and Meghan forever changed the British royal family for the modern age.

Harry and Meghan are widely covered in the tabloids yet notoriously private. What was the greatest challenge that you encountered in the reporting process for this book?

Carolyn Durand: The story evolved and it changed so dramatically. When we entered into the project, we expected to chart their courtship and their marriage — how they had inspired a whole host of young people, and how their sense of inclusivity and diversity had really changed the monarchy. Then the couple decided that they were going to step back as members of the royal family. So what we set out to do when we began the process of writing the book was very different in terms of telling their story.

When I see the blatantly negative coverage of Harry and Meghan — especially of Meghan — it feels very similar to comments that were lobbed at Barack and Michelle Obama. This false idea that they're asking for some sort of "deferential treatment" and just living off of taxpayer money. How much of the vitriol that Harry and Meghan experienced do you believe was rooted in racism?

Omid Scobie: Not only did we have issues of racial insensitivity or even racism itself at play, but there were also the themes of Xenophobia and sexism in a lot of the media coverage we saw in sections of the tabloid press. That was something that never really disappeared. Obviously at the beginning, it was much more overt. We saw those comments about Meghan being “straight outta Compton” or about her “exotic DNA” thickening the thin blood of the royal family. Just very sort of insensitive commentary.

In the UK, racism is often less overt. I think Meghan was regularly reminded that she was Other, that she wasn’t one of us, and that came across in a lot of the commentary. We saw one newspaper telling her to “fly away home,” and another newspaper telling her that we, as Brits, didn’t see her as true royalty. I think that kind of language is so dangerous and toxic, but it was allowed to thrive within the media landscape here.

That was partly one of the reasons why the couple grew so frustrated, because within the institution itself, they felt very unprotected. There was nobody defending them. That “no comment” culture that exists within the royal family was actually doing them a lot of damage.

"Meghan was held to an almost impossible standard from day one. Rather [than] her differences being celebrated, in many cases they were weaponized against her."

How did the royal family and their circle respond to Meghan’s presence? Did they make an effort to curb their racially insensitive remarks when she arrived, or did they become bolder and more aggressive?

Scobie: I think when we look at members of the royal family, there was actually a lot of effort made. I think really where the support lacked was within the institution of the monarchy itself. Yes, they had a great team around them, but some of those more problematic stories that were leaked to the press often came from other quarters of the royal household. I think it was at those moments that Harry and Meghan really realized that perhaps some of their biggest problems were from within, and that was a very difficult thing to take on. It’s something that wasn’t necessarily dealt with, and I think it’s why, when they left the royal family as working members, the resentment was more toward the institution of the monarchy than toward the royal family itself.

Do you think that the biggest factor in their decision to step down was this institution of the royal family and what protections it could and could not provide by design, or the public and press responses to Meghan’s arrival?

Scobie: I think that they really struggled to move away from that feeling of being under attack [in the press] all the time. It’s why we’ve seen them continue to fight back more loudly than ever, taking on three British tabloids through the legal system. That’s a very bold move to make.

I think also, within the institution, as much as they spoke about their grievances — and they were very vocal about it along the way — they often found that that request for more support fell on deaf ears. I think that ultimately that the infrastructure’s just not there, and that’s why they made that decision to step away.

Do you think the press were unfair to Meghan in general?

Scobie: I think that certainly among sections of the press, the commentary was particularly unfair. I think that Meghan was held to an almost impossible standard from day one. Rather [than] her differences being celebrated, in many cases they were weaponized against her in some of the coverage, and she hasn’t really been able to get away from that in those same sections of the press.

What do you think Harry and Meghan’s future looks like now, in terms of their relationship with Harry’s family, and as this new, independent entity?

Durand: I think that we’re going to see Meghan and Harry becoming much more active. They’re very, very busy right now planning for the launch of their Archwell non-profit, and we’re going to see them get much more involved in the issues that remain really important to them, like racial justice [and] gender equality.

All of the youth around the world that were tremendously inspired by Harry and Meghan are going to have an opportunity to see them do the things that really help young people in the future. So I think it is a tremendously exciting time for them [and] for their family. It’s just like Princess Diana stepping back when she got divorced. I think that we will see in Harry and Meghan a future that’s limitless.

More like this
Meghan Markle Gave An Adorable Lilibet Update
By Alice Broster and Sam Ramsden
Tyler Perry’s Birthday Note To Meghan Markle Mentioned Struggles She’s Overcome
By Brad Witter
10 Must-Read New Books Out This Week
By K.W. Colyard
13 Photos Of Princess Charlotte Loving The Commonwealth Games
By Sam Rogers
Get Even More From Bustle — Sign Up For The Newsletter