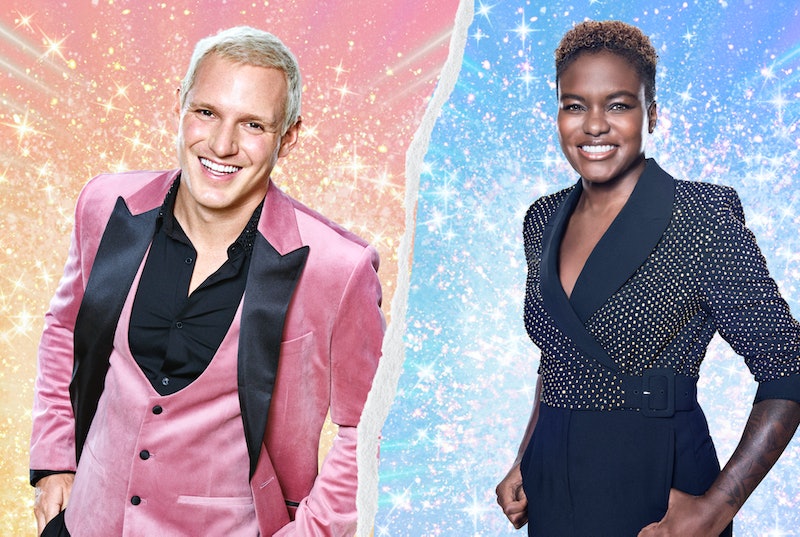 Although 2020 has proven a year for leisurewear and sweats for most of us, the Strictly line-up is here to jazz things up. The first-look pics of this year's Strictly Come Dancing contestants have been revealed, and are every bit as sparkly as you'd hope and dream.

The photos, released by the BBC, show contestants in their ballroom finery. From Clara Amfo's magnificent gold flapper dress, to Caroline Quentin's navy sequinned shoulder padded look, and Maisie Smith's cobalt blue number, the ensembles are all pretty spectacular and promised to pick up the studio lights. Ranvir Singh and Jacqui Smith have opted for plunging necklines, while Nicola Adams' suit is the perfect mix of a smart, tailored suit, combined with the sparkly pizazz the show warrants.

The male contestants holding back, either. Bill Bailey's navy embroidered suit could easily put his partner's dress to shame, as would Jaimie Lang's chic pink look. JJ Chalmers' suit is sure to leave viewers in a purple haze, while Max George and Jason Bell have both gone for sheer shirts, paired with smart trousers. HRVY's image has yet to be revealed; per the Guardian, the Youtuber tested positive for COVID-19 and is quarantining for the time being.

There has been a considerable amount of hype ahead of the new season, not least due to the first same-sex pairing in the show’s history. Unfortunately, not everyone has been as supportive as we'd hope with regards to this landmark move. Former judge Len Goodman told the Mail On Sunday that he thinks the pairing might not appeal to all viewers: “The older viewers have their certain traditional ways about it all so might not be sure,” he said.

Broadcaster Graham Norton's comments to Best Magazine seemed to echo that sentiment, when he said it “does kind of muddy the waters for the judges….You want to be able to compare like with like.” He has since retracted the quote via Twitter, saying it was his own fault and a “throwaway comment” from “ages ago.” He also added: “And to people messaging me to say they agree - please stop. Everyone dancing on that show brings pure joy. Let’s all enjoy a beautiful thing.” Here, here! Bring on Season 18.

Season 18 of Strictly Come Dancing begins on Oct. 17 On BBC One.