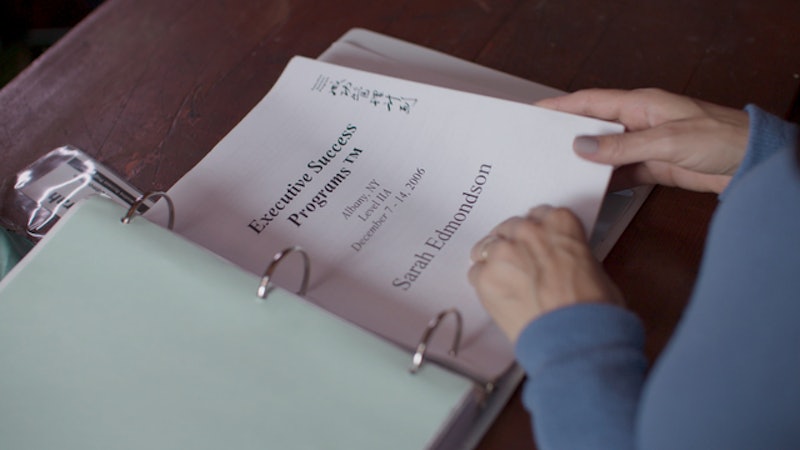 Among the key figures credited with taking down NXIVM in HBO's The Vow is Frank Parlato, a former publicist for the group and one of the first who raised concerns about its operations. When Parlato was hired to work for NXIVM in 2007, he was told that leader Keith Raniere was "a celibate monk,” he claimed to Oxygen. But over time, he had a "slow awakening" to the truth of the organization, which later splintered amid allegations of sex trafficking and fraud.

Parlato was fired from NXIVM in 2008, and he began publishing intel about the group on his website the Frank Report. It was there that he eventually wrote about DOS, a "sex cult" within NXIVM in which women were allegedly branded, put on near-starvation diets, and referred to as slaves. "Before that, no one was paying attention," Parlato told Oxygen. "It was the branding that made people understand what was really going on.”

Other members, like The Vow's Sarah Edmondson and Bonnie Piesse, also began to speak out, and Raniere was eventually arrested in 2018. In June 2019, he was found guilty of sex trafficking, forced labor conspiracy, human trafficking, and multiple counts of racketeering, including sexual exploitation of a child.

Raniere's sentencing was a major win for Parlato, but the journalist has also faced his own legal troubles. According to the Niagara Gazette, a current 18-count indictment alleges that Parlato and his business partner Chitra Selvaraj conspired to defraud the IRS through an elaborate scheme that involved 15 shell companies, 50 bank accounts, and multiple attorney trust accounts in Niagara Falls (Parlato has denied the allegations). They're charged with wire fraud and wire fraud conspiracy, money laundering, and corrupt interference with the administration of the IRS. The indictment is the result of a five year FBI investigation into Parlato's business dealings that began in 2011. The trial has been delayed until June 8, 2021.

This isn't the first time Parlato's had a run-in with the law. Per The Buffalo News, board members of his non-profit resigned in 1993 amid claims that "some of the things he was doing could get us into legal trouble." The Niagara Gazette also reported that in 2010, Parlato was caught in a dispute over the One Niagara building, where a group of investors alleged that his management placed the building in jeopardy of foreclosure. Parlato later reportedly sold his share of the building, which had $1.57 million in outstanding city and county taxes.

The Vow seems to hold Parlato at arm's length, acknowledging his role without digging much deeper. As Jen Chaney noted for Vulture, a visit to Parlato's website, the Frank Report, "reveals that it’s filled with reporting on NXIVM but also posts written by Roger Stone and at least one defense of QAnon." While it’s "understandable that [the directors] decided that a whole sidebar on Parlato would be too distracting," Chaney wrote, "this still raises the question of what other notable information or nuances may have been sliced out of the series."

More like this
24 Years Ago, 'Friends' Dropped Its Most Underrated Ross & Rachel Episode
By Grace Wehniainen
This House of the Dragon Character Will Create Another Scandal For Rhaenyra
By Kadin Burnett
'House of The Dragon' Episode 6 Will Take Place A Decade After Episode 5
By Kadin Burnett
'Killing Eve' & 'Doctor Who' Stars Just Joined The Cast Of 'True Detective' Season 4
By Brad Witter
Get Even More From Bustle — Sign Up For The Newsletter