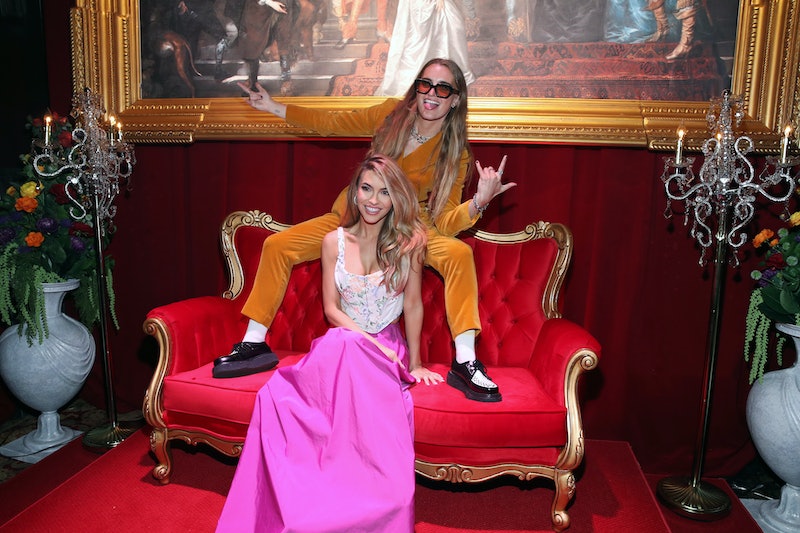 One week after Selling Sunset star Chrishell Stause revealed they’re dating G Flip, the Australian musician shared more details about their relationship, including how it turned romantic. As G Flip told host Janine Rubenstein on the May 13 episode of the People Every Day podcast, they didn’t become a couple immediately. Stause was still dating Jason Oppenheim when they first met last Halloween and the singer wasn’t single, either.

“We were both with our ex-partners then. ... And then, we obviously separated from our partners, and we just started talking and stuff,” G Flip explained on the podcast. “We just found a lot of similarities, even though people would think we are from, like, different corners of the world. We find ourselves so similar sometimes.”

One thing they have in common is a desire to have children. As Selling Sunset viewers learned in Season 5, disagreement on that topic is what ultimately led to Stause and Oppenheim’s December 2021 split. Adding that they and Stause, 40, are “very transparent” about the stages they’re at in their lives right now, G Flip, 27, said that they “definitely see children” in their future. After all, the artist “always loved kids” and even worked as a music teacher before launching a solo career.

G Flip sees their relationship going the distance, regardless, elaborating, “I’m very fortunate to have her in my life. We both feel like we’ll be in each other’s life forever. We have like a very strong connection that you don’t find every day.”

Indeed, Stause announced on the Selling Sunset Season 5 reunion that she had recently been “spending a lot of time with” G Flip, whom she referred to as an “extremely talented musician” who is “very important” to her. According to the reality star, their relationship began when she was cast to star in their music video. “It’s about this chaotic love story,” Stause explained to host Tan France on the Netflix special. “I come from soaps, I love acting. And with the job that we have, I don’t always get to do it. At first, of course, I was like, ‘Yes, let’s do that.’”

G Flip’s “Get Me Outta Here” music video dropped on May 12 and showed the pair making out in a convenience store, among other places. “Sorry everyone, I was confused and thought this was how babies were made,” Stause captioned a “Get Me Outta Here” clip on Instagram. “Back to the drawing board!” Her new partner, for one, appreciated the joke, commenting, “You’re absolutely amazing.”

In another Instagram post earlier in the week, Stause also discussed the “deep connection” she has with G Flip. “Like I said on the show, you don’t get to choose when you come into someone’s life,” the real estate agent shared on May 10. “As much as I wish what I wanted in my last relationship aligned [with] the same things it didn’t. And that’s okay. That doesn’t diminish how much love we have for each other — Jason and I — and how much we want each other to genuinely be happy.”

Oppenheim, for his part, doesn’t seem to have any hard feelings about his ex’s new relationship with G Flip. “Such a beautiful video,” he commented on Stause’s post, adding a red heart emoji.