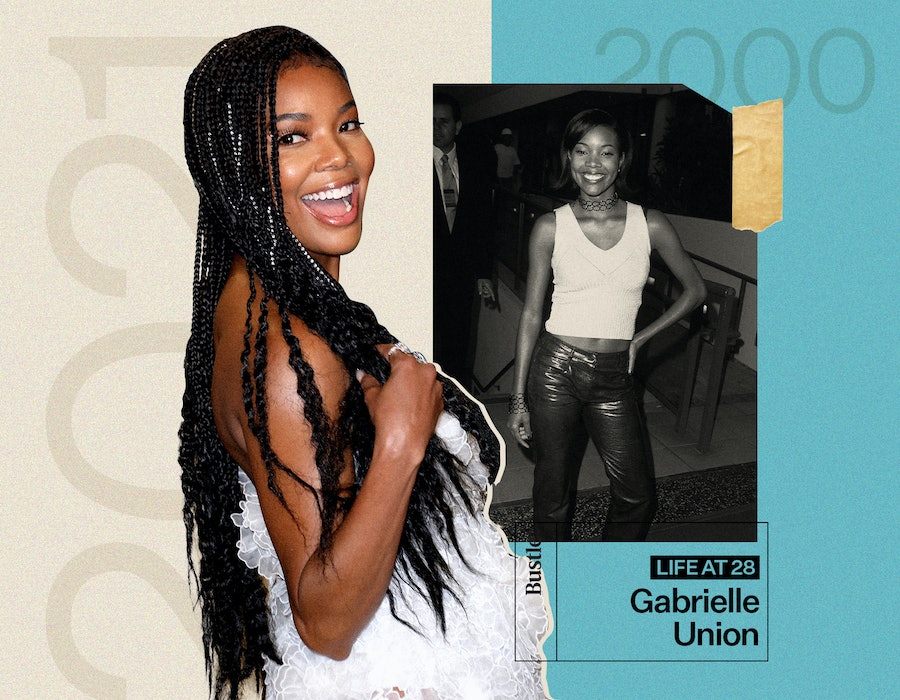 In Bustle’s Q&A series 28, successful women describe exactly what their lives looked like when they were 28 — what they wore, where they worked, what stressed them out most, and what, if anything, they would do differently. This time, Gabrielle Union talks about her new memoir You Got Anything Stronger?, navigating Hollywood as a young Black actor in the early 2000s, and starting therapy at 28.

From the outside looking in, the year 2000 was an auspicious one for 28-year-old Gabrielle Union. She was riding the success of now-classic films Love & Basketball and Bring It On; a year prior, the Omaha, Nebraska, native made her film debut in iconic rom-coms She’s All That and 10 Things I Hate About You. Privately, however, Union was bogged down by impostor syndrome and feelings of self-doubt.

“If I didn’t get a role, that meant I’m a loser, that I’m not attractive enough, that I’m not smart enough,” she tells Bustle. “Being such a prisoner to judgment, outside validation, and the white gaze, I bought into the American Dream via assimilation and I got fool’s gold.”

In her new memoir, You Got Anything Stronger?, a follow up to 2017’s We’re Going to Need More Wine, Union unapologetically bares her soul, insecurities and all. From painful truths about her surrogacy journey and forgiving husband Dwayne Wade after fathering a child with another woman to a terrifying racist encounter with Neo-Nazis in Croatia, Union admits she’s anxious about the way her “brutally honest” truths will be received by the public.

“One of my greatest fears is being misunderstood,” she says. “What I want people to know is your truth and your individual journey makes you who you are, and your vulnerabilities and what you might perceive as a weakness is actually a superpower.”

My then-husband Chris Howard had gotten released from the NFL, so I had to figure out how to make a living. I was disillusioned. I totally drank the Hollywood Kool-Aid, when you get those It Girl lists and you’re the new ingenue and they’re like, “Your career is going to be out of this world.” It just wasn’t what I was promised. It’s such a jolt when you buy into institutions and systems, and they fail you or they disappoint you. 28 was a time of disappointment and expectations not met.

What stressed you out the most during that time?

Understanding that Hollywood is a business and that Hollywood is in the business of smoke and mirrors. That was a biggie, because I’ve always had an obscene work ethic. I thought, “If I just work hard enough, then X, Y and Z is going to happen.” It just didn’t seem to matter, and that was frustrating to me.

“I reap more benefits from Bring It On today than I did at the time.”

At that time, I wasn’t the star of any of those. In Bring It On, they made it seem like it was 50/50 [with costar Kirsten Dunst], when it wasn’t exactly so. I didn’t reap the same benefits [she did]. I reap more benefits from Bring It On today than I did at the time.

What kept you going when you were met with so many disappointments?

Bills! I know pretty much every person of color who is the first generation making decent money has a lot of responsibilities. I never had the luxury of stopping and shifting gears completely, because I have a lot of people who depend on me financially.

Did you splurge on anything with the success of Love & Basketball and Bring It On?

I bought a home, but I always took each check as, “This is going to be my last check. They’re going to figure out that I suck and I’ll never work again.” I saved all those checks and I put them on a down payment so that my mortgage would be the same as my previous rent. That way, I could always afford it no matter if Hollywood didn’t pan out.

What did a typical Friday night look like for you at 28?

We did a lot of potlucks at our house. My ex-husband was a great f*cking cook. He was a New Orleans guy, so he would make shrimp étouffée, gumbo, and po’ boys, and we would do crawfish boils. It was just a simpler time. Nobody was really balling out like that, so everyone would bring a dish, and we’d all drink and we’d have dance parties in the kitchen. We were just taking it back to what made us happy before all this sh*t became disappointing: good food, cheap booze, and friends.

How have you changed since you were 28?

I’m clear about life and love, and people, and expectations, and I’m free. I wasn’t free then in any way, shape or form. I don’t recognize that 28-year-old. I’m like, “Whew, girl. Sucks to be you.” It’s just night and day.

It was around that time when Tisha Campbell saw that I was struggling. She gifted me sessions with a therapist, who is my therapist to this day. It might be one of the single greatest gifts anyone has ever given me.

What are you most proud of during that time?

I’m most proud that I survived it, that I somehow figured out how to thrive even in the darkness that I was wrapped up in like a cocoon. I somehow survived and persevered, and kept moving toward the light. That’s huge.

Has there ever been a moment where you feel like you made it?

In 2003, after Bad Boys II was released, Wilmer Valderrama, one of his best friends, Tadao Salima, and myself were at Club Bed in Miami. Wilmer and Tadao were like, “Yo, Jermaine Dupri wants to introduce you to Janet Jackson.” They were dating at the time.

Janet Jackson is the moon, the stars, and the rainbow to me. I didn’t want to meet her at that moment, because I was a sweaty mess, and I didn’t think my outfit was cool enough. I kicked and screamed, but Wilmer and Tadao convinced me to go over there. Janet sees me, and she reacts like she saw her best friend. She hugged me and said, “I’m so proud of you.” I was like, “What the f*ck? How does Janet Jackson even know I’m alive, much less seen any of my work to be proud of me?” I have so much gratitude for her and that moment of being seen and validated by someone I looked up to my whole life who looked like me.

I’d just start posing questions like: What if there was another way? What if you could divest from white supremacy and patriarchy, and toxic masculinity, and the need to be chosen? What would you do? Where would you go? Who’s the first person you would call? What kinds of friends or knowledge might you seek out?

More like this
At 28, Rosie Perez Risked Her Career To Stop Playing Stereotypes
By Gabrielle Bondi
At 28, Debra Jo Rupp Was Living A Much Different '70s Show
By Grace Wehniainen
Hailee Kaleem Wright's Topsy-Turvy Path From MTV To Broadway
By Samantha Leach
Zach Reveals The Chaotic 30 Minutes That Were Cut From ‘The Bachelor’ Premiere
By Grace Wehniainen
Get Even More From Bustle — Sign Up For The Newsletter
From hair trends to relationship advice, our daily newsletter has everything you need to sound like a person who’s on TikTok, even if you aren’t.