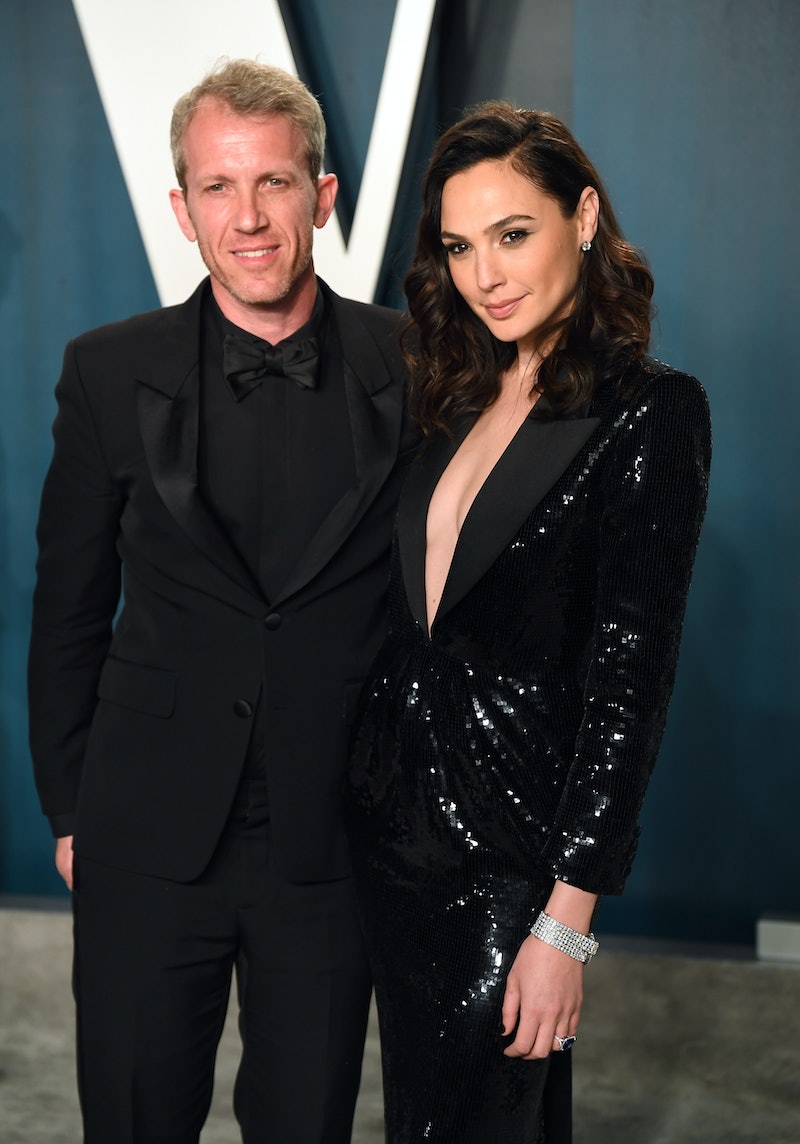 A day after presenting at the 2021 Golden Globes, Gal Gadot has confirmed she's pregnant with her third child. Speculation that the Wonder Woman 1984 star, 35, might be expecting began on Sunday night after she wore a stunning loose-fitting Givenchy mini dress. Gadot didn't reveal the news while on stage, but she announced it shortly after via social media on Monday, March 1.

“Here we go again ❤✋🏻🧿,” she captioned a selfie of herself with husband Jaron Varsano, 46, and their two daughters — Alma, 9, and Maya, 3. In the photo, all three family members cradle Gadot's stomach. As soon as the news was officially public, several celebrities wished Gadot and Varsano, who have been married since 2008, congratulations on their upcoming arrival. Two-time Oscar winner Hilary Swank commented, "Ahhhhhhhhh congratulations!! 🙌🏽" while Jason Momoa, who plays the Aquaman to Gadot's Wonder Woman, wrote "congratulations mama" alongside several red hearts. Gisele Bundchen also wished the couple "congratulations!!!" with an array of hearts.

The Instagram post was a rare glimpse of Gadot's daughters on her Instagram feed. In recent posts, the actress typically only shares photos that shield her children's faces. However, Gadot has been open about balancing motherhood with her burgeoning acting career. "When Alma was around two, I was really anxious about how to travel with a child, moving her from one country to the other, all the different languages," the Israel-born Gadot told Glamour in 2016. "It was my husband who told me: 'Gal, think about what kind of a role model you want to be. If you want to show Alma that she can follow her dreams, that's what you should do, and we will figure out the logistics.'"

While she awaits the birth of baby no. 3, Gadot will have several film and TV projects to keep her occupied. Her next few projects include starring alongside Dwayne Johnson in the thriller Red Notice, playing the actress/inventor Heddy Lemarr in an AppleTV+ series, and reprising her role as Diana Prince in Wonder Woman 3.

More like this
Who Is Nick Cannon Dating & How Many Kids Does He Have?
By Jordyn Tilchen and Radhika Menon
Hailey Bieber Just Responded To *That* Viral Met Gala Moment
By Radhika Menon and Sam Ramsden
Dixie D’Amelio & Noah Beck “Love Each Other” Despite Breakup Rumors
By Julia Emmanuele, Jordyn Tilchen and Grace Wehniainen
Adam Devine Hilariously Let Everyone Know He’s *Not* Accused Cheater Adam Levine
By Brad Witter
Get Even More From Bustle — Sign Up For The Newsletter