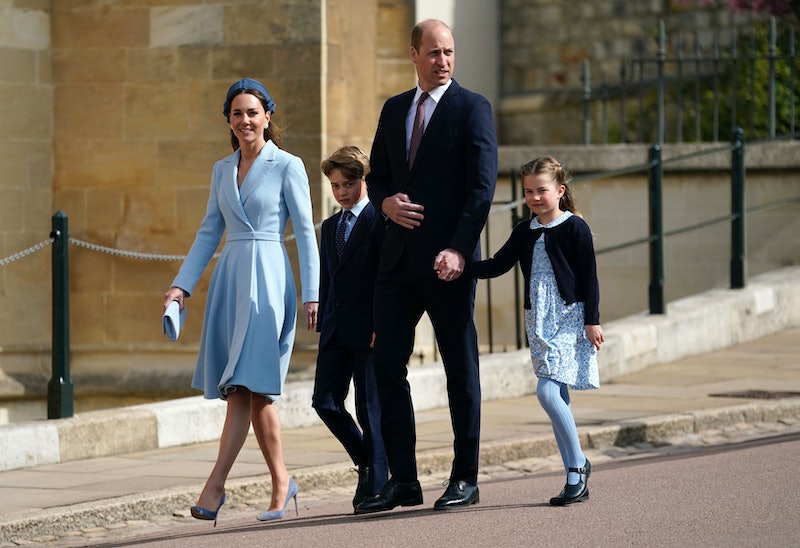 Easter Sunday brought out multiple senior members of the royal family — and their little ones. While Queen Elizabeth had to miss the royal family’s annual Easter service at St. George’s Chapel this year for the first time in five decades, her grandchildren Prince George and Princess Charlotte did join. It was their first time participating in the tradition, but they looked like they belonged, wearing blue outfits to coordinate with parents Prince William and Kate.

The Duke of Cambridge was dressed in a classic navy suit and tie, and 8-year-old George matched him closely. Charlotte, 6, and the Duchess of Cambridge wore mostly pale blue, but they each worked in some navy to tie the collective look together. For Charlotte, that meant topping her floral dress from Rachel Riley and baby blue tights with a navy cardigan. For Kate, it was adding a dark blue headpiece to go with her pale blue Emilia Wickstead coat dress.

Willam and Kate headed the group of royals because the queen has been experiencing mobility issues of late and the Prince of Wales and Camilla, Duchess of Cornwall were also absent. They still had a strong contingent, though. The Earl and Countess of Wessex attended with their children, Lady Louise Windsor and James, Viscount Severn. With them as well were Princess Eugenie, Peter Phillips, and Zara and Mike Tindall, plus the Tindalls’ daughter Mia and Phillips’ children, Savannah and Isla. (Harry and Meghan, the Duke and Duchess of Sussex, were in the Netherlands for the Invictus Games.)

Aside from the Easter church service, the holiday weekend is usually spent privately with family, per the royal family’s website. Hopefully that means the Cambridge children still had a chance to take part in some of Easter’s more kid-friendly options after they finished their royal duties. Their other grandparents have favorite traditions of their own, and Kate’s mom, Carole Middleton, shared some of them while promoting her party accessories company, per the Daily Mail. She listed decorating a wire tree with colorful eggs with the kids — and having an Easter egg hunt with everyone. “We like to get the whole family involved and it gets quite competitive,” she said.

Sunday’s service marked the older two Cambridge kids’ second royal outing in just three weeks. (Their 3-year-old brother, Prince Louis, was not at either.) On March 29, George and Charlotte joined their family in honoring their late great-grandfather Prince Philip at Westminster Abbey. It was a somber affair, but viewers enjoyed watching Charlotte’s facial expressions during the service, including a sweet moment she shared with her dad’s cousin Princess Beatrice. The young Cambridges might not attend public appearances often, but when they do, they make an impression.

More like this
Kate Middleton Wore The Ultimate '90s Power Suit
By Sam Ramsden
Every Single Thing In Maya Jama’s 'Love Island' Wardrobe
By Darshita Goyal and Sophie McEvoy
Beyoncé Wore A Golden Sheer Gown At Her VIP Dubai Concert
By Sam Ramsden
Hailey Bieber Looks Just Like Princess Diana & I Need To Copy Her ASAP
By Sophie McEvoy
Get Even More From Bustle — Sign Up For The Newsletter
From hair trends to relationship advice, our daily newsletter has everything you need to sound like a person who’s on TikTok, even if you aren’t.