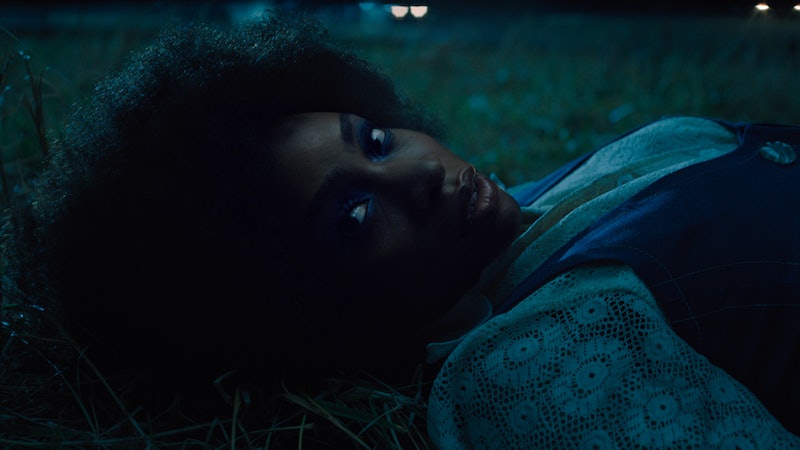 After WandaVision's third episode, it's clear that Geraldine isn't who she says she is. We already had an inkling of this: actor Teyonah Parris was announced to be playing Monica Rambeau, the daughter of Captain Marvel's best friend. So it was confusing to viewers (and seemingly to her as well) when she introduced herself to Wanda as "Geraldine," a resident in Westview.

Episode 3 amplified this confusion. It centers around Wanda attempting and failing to hide her late-stage pregnancy, which she magicked up in the span of just a few hours. Geraldine pops in while she's preparing for the twins' arrival, ultimately helping Wanda to deliver the boys. Wanda then mentions that she, too, once had a twin brother. “He was killed by Ultron, wasn’t he?” Geraldine suddenly asks.

Wanda does not appreciate being reminded that Tony Stark's killer robot helped end her brother Pietro's life. Now suspicious, she notices Geraldine's necklace, which is the same sword symbol that was on the toy helicopter and the beekeeper's suit. Just as she did with the beekeeper, Wanda immediately "fixes" the problem: she launches Monica so high into the sky that she flies out of Westview and presumably back into the real reality. Once on the ground, we see Westview is contained in an electric field, and Monica is surrounded by agents. So what exactly is going on? Fans have a few theories.

This was a long-running theory, but at this point Monica being an agent of S.W.O.R.D. is a confirmed fact. In a preview for Episode 4, agent Jimmy Woo calls Monica "Captain Rambeau," and she wears a jacket with the S.W.O.R.D. logo on it. There is also an image of the rest of Westview's inhabitants and what looks like their S.W.O.R.D. personnel files, confirming that whoever is controlling Westview has trapped all the agents inside. (Whether it's Wanda or a villain pulling the strings remains unclear.)

The helicopter was Monica's

One fan suggests that Monica actually flew in on the plane that Wanda later found in the bushes. While this seems impossible, in the Ant-Man movies they often turned toy-sized vehicles into full-sized ones using Hank Pym's technology.

Monica and Wanda used to be S.W.O.R.D. teammates

One theory suggests that Wanda isn't against S.W.O.R.D., but actually began working with them after Thanos' defeat in Endgame. Reddit user liebedich pointed out that the way Monica says, “Wanda, don’t be like that” suggests familiarity. They guess that maybe the women were once teammates, and Wanda got sucked into this pocket reality while trying to rescue her fellow agents. If that's the case, you could argue that Wanda would be willing to maintain Westview's lie, as she finally has her perfect life there.

Everyone but Monica is dead

This is one of the more morbid theories out there, but it's a surprisingly common one. Many fans believe that Westview is actually a cemetery and all the inhabitants except for Wanda and Monica are dead; that's why Agnes tells Vision that Geraldine "has no home" (aka a resting place). This theory seems to have traction with fans because we already know Vision is dead, and many believe the primary villain of WandaVision is actually Mephisto, Marvel's version of the devil. (This has roots in the comics, where Wanda uses pieces of Mephisto to magically make her twin boys.)

It's all a biblical allegory

Going along with the devil theory, some fans pointed out that Monica's ejection plays out like a biblical tale. Monica literally bites into an apple, mentions "forbidden" knowledge of Pietro and Ultron, and gets thrown out of Westview, Wanda's idea of Eden.

A popular theory is that Agnes is actually Agatha Harkness, a witch who helps Wanda master her powers in the comics. While it appears that Agnes fears for Monica's safety in Episode 3, others believe that Agnes was actually worried about Monica "waking up" Wanda and disrupting Mephisto's plans. This theory suggests that Agnes isn't trapped there and is actually actively working against S.W.O.R.D.

Monica will become a superhero

In the comics, Monica is currently known as the superhero Spectrum, but before that she actually held the Captain Marvel mantle. It doesn't seem like Monica has any powers, but the show did tease a starburst image similar to Spectrum's logo when Vision did the magic trick. Now that she's out and back with S.W.O.R.D., is it possible that Monica will figure out how to swoop in and save the day?

More like this
Netflix Shut Down 'Bridgerton' S3 Rumours About A “Very Dark” Storyline
By Bustle
Here’s What Happens To Bill & Frank In 'The Last Of Us' Video Game
By Brad Witter
Helena Bonham Carter Doesn't Think 'The Crown' “Should Carry On"
By Sam Ramsden
All The ’70s Easter Eggs You Missed In 'That ’90s Show'
By Grace Wehniainen
Get Even More From Bustle — Sign Up For The Newsletter
From hair trends to relationship advice, our daily newsletter has everything you need to sound like a person who’s on TikTok, even if you aren’t.