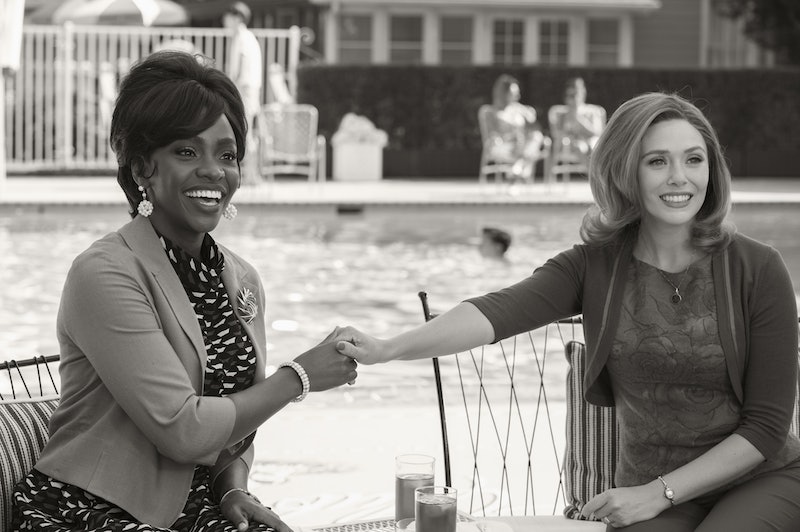 There are a lot of strange things happening in WandaVision. Though Vision technically died in Avengers: Infinity War, the show centers around his and Wanda's seemingly perfect lives in the suburban town of Westview. It also seemingly takes place in an old sitcom, which a mysterious figure is watching on a monitor and taking notes. And there are a collection of confused neighbors who at times feel more robotic than Vision, among other oddities. Naturally, this has led to a number theories about WandaVision, with many believing this fake TV reality is all Wanda's doing. Let's break them down.

A popular theory is that WandaVision is a twist on Brian Michael Bendis' 2005 Marvel comic storyline "House of M." (Director Matt Shakman confirmed it was one of several inspirations for the show.) In the comics, Wanda is a mutant with reality-shaping powers, and she experiences a mental breakdown after the death of her magically created twin sons, Billy and Tommy. This makes her powers incredibly unstable and leads to her create a whole new utopian reality in which her children are alive.

Neither the X-Men nor Billy and Tommy have been introduced to the MCU (though Wanda is suddenly pregnant in Episode 2). But there are obvious hints in WandaVision that she's in denial that Vision died. She jokes that Vision has an "indestructible head" despite Thanos crushing his forehead to take the Mind Stone in Infinity War. When a mysterious beekeeper, who sports the same sword logo as the TV monitor, climbs out of a manhole, Wanda tells him "no" and reverses time so that she and Vision can continue to live in domestic bliss. And a major clue is the show's title itself, which could be interpreted as a play on "television," or literally "Wanda's vision."

The Couple From the Commercial Are Wanda's Parents

Fans also believe that the couple we see in commercials throughout the show are actually Wanda's parents. In Age of Ultron, Wanda revealed that a Stark Industries mortar shell struck their Sokovia home and killed her parents. While Wanda went on to team up with Tony Stark and the Avengers, she's undoubtedly still processing that now her parents, her brother, and her lover are all dead. Wanda's perfect sitcom world could be a way to deny all of that.

Someone Has Kidnapped Wanda

There are also some hints that Wanda might not be doing this of her own volition. At one point, a voice that sounds like Ant-Man's Agent Jimmy Woo (Randall Park) asks on the radio, "Wanda? Who's doing this to you?" Though this could just mean that Jimmy is resistant to believing Wanda is behind everything.

Elsewhere, the name "Strucker" appears in one of the commercials — a possible reference to Baron Wolfgang von Strucker, the HYDRA agent who experimented on Wanda and her brother, thus giving them their superpowers. He died in Age of Ultron, but could the name be a clue that HYDRA has somehow imprisoned Wanda?

Dottie Is a Demon

Another major theory is that Mephisto, who's basically Marvel's version of the devil, is involved. In the comics, pieces of Mephisto are used to create Wanda's sons; in WandaVision, it's possible that she made a deal with him to bring Vision back. As one fan pointed out on Twitter, the number 6 is often missing in the show.

Some fans are even theorizing that neighborhood queen bee Dottie (Emma Caulfield) is actually Mephisto. Agnes (Kathryn Hahn) says she's "the key to everything" and that the “devil’s in the details."

The Beekeeper in WandaVision is an Agent

A sword logo pops up several times in the show, appearing on the beekeeper's suit, a man's tie, and on the notebook of whoever is monitoring Wanda's actions. The sword is the symbol of S.W.O.R.D., which stands for Sentient Worlds Observation and Response Department. It's like the outer space arm of S.H.I.E.L.D., the Earth defense organization that Nick Fury was working for before it all blew up in Captain America: Winter Soldier. Fans on Reddit theorize that Nick Fury is now the head of S.W.O.R.D., and they're naturally concerned that Wanda is using her reality-bending powers in increasingly selfish ways.

The TV monitor could suggest that it's S.W.O.R.D. who imprisoned and is now studying Wanda. But Wanda seems to be the one bamboozling the S.W.O.R.D. agents. As one fan on Twitter pointed out, the beekeeper, Vision's coworker, and the milkman are all background characters from Agents of S.H.I.E.L.D. who likely followed Fury to S.W.O.R.D. It's even possible that all of the Westview residents are trapped S.W.O.R.D. agents, and that's why Vision's boss' wife begs Wanda to "make it stop" at dinnertime.

"Geraldine" Is an Agent Too

It was announced in 2019 that Teyonah Parris would play Monica Rambeau, the little girl from Captain Marvel, in WandaVision. But in Episode 2, she instead introduces herself as "Geraldine," and trailers show that she's confused about where she is. This is likely because she's also a trapped S.W.O.R.D. agent. As one fan pointed out, she only seems to forget her real name when Wanda touches her.

Vision Will Be Reborn

If Wanda's really behind all of this, her end goal is likely to bring Vision to life in some shape or form. Fans theorize that there are several numerical hints on the show that point to that actually happening. The numbers "8/23" appears over and over again: on the calendar, a watch, and even in the configurations of how the Westview neighbors sit.

Per ScreenRant, if you swapped the order of the date and month — which Wanda would as a European, WandaVision reminds us — you get Avengers #238, a comic book issue concerned with Vision's revival. It's possible Wanda brings Vision back to life and gets her happily ever after, but as of right now their reality seems to hinge on Wanda working through her grief.

More like this
Everything To Know About 'And Just Like That...' Season 2
By Jack Irvin and Grace Wehniainen
6 'Happy Valley' Easter Eggs You May Have Missed
By Sophie McEvoy
Claire Foy Spoke Out About 'The Crown's Gender Pay Gap
By Sam Ramsden
The Plane Crash In 'Dear Edward' Is Based On A 2010 Tragedy
By Grace Wehniainen
Get Even More From Bustle — Sign Up For The Newsletter
From hair trends to relationship advice, our daily newsletter has everything you need to sound like a person who’s on TikTok, even if you aren’t.