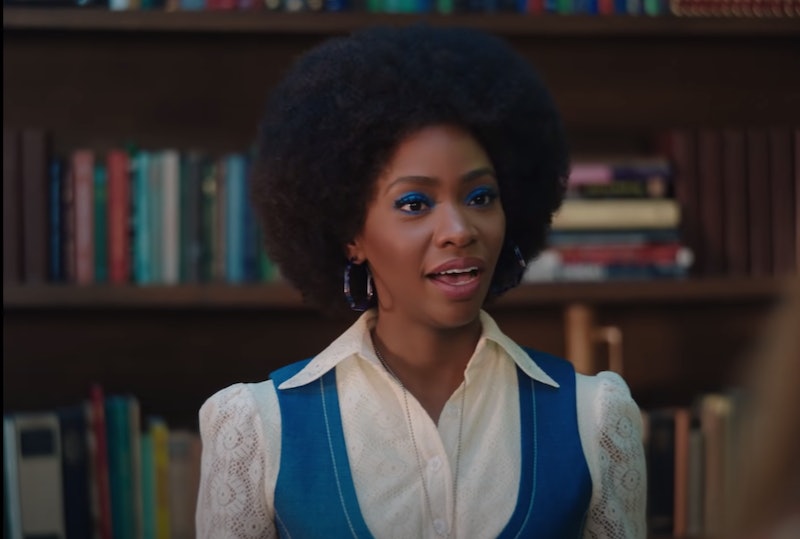 Spoilers ahead for Episodes 1 and 2 of WandaVision. When Teyonah Parris was cast in WandaVision, it was announced that she would be playing the adult version of Monica Rambeau. However, when she's introduced in Episode 2 of the new Disney+ series, it's as a character named Geraldine, another newcomer to the town of Westview who quickly befriends Wanda while volunteering for a fundraiser with her.

Parris is already anticipating that WandaVision viewers will be confused. "'Well she was announced as Monica Rambeau — the actress was — so who is Geraldine?'" she imagines them wondering. "'Is that Monica? Is it a different person? How is this all going to weave together?'"

Though Parris declined to clarify Geraldine's identity — or her connection to Monica — she did elaborate on the experience of playing the character(s). "[Monica] is unapologetic," Parris says. "She’s very bold and brave and fierce, and so I really do love that about her and have tried to incorporate some of those characteristics in my portrayal of her."

Monica's first introduction to the MCU was as the child of Carol Danvers' best friend Maria Rambeau in Captain Marvel, but Parris' Monica is all grown up and, based on one of the WandaVision promo images, working for the mysterious S.W.O.R.D. agency. For Parris, landing the role was a dream come true. "I’ve wanted to be a part of the MCU since Iron Man in ‘08, and that was simply because it looked fun and badass and things were blowing up and people were flying," she says. "And then now, actually being a part of it, just knowing that I get to play a Black woman who’s a superhero ... I get the opportunity to be that image that I didn’t see growing up, and that’s really exciting for me."

When it comes to the many mysteries at play in WandaVision, however, Parris has more questions than answers. "I think the interesting question with all of these characters, and what starts to kind of reveal itself [in the show] is: Do they fit in? What is this? And why is it? And how is this all going to come together?"

More like this
All The ’70s Easter Eggs You Missed In 'That ’90s Show'
By Grace Wehniainen
The 'Gossip Girl' Reboot Creator Is “Looking For A New Home” To Air A Potential Season 3
By Brad Witter
The 'Teen Wolf' Creator Revealed If 'Wolf Pack' Takes Place In The Same Universe
By Grace Wehniainen
'The Crown' Season 6 Has Suspended Filming "Out Of Respect" For The Queen's Death
By Bustle Staff
Get Even More From Bustle — Sign Up For The Newsletter
From hair trends to relationship advice, our daily newsletter has everything you need to sound like a person who’s on TikTok, even if you aren’t.