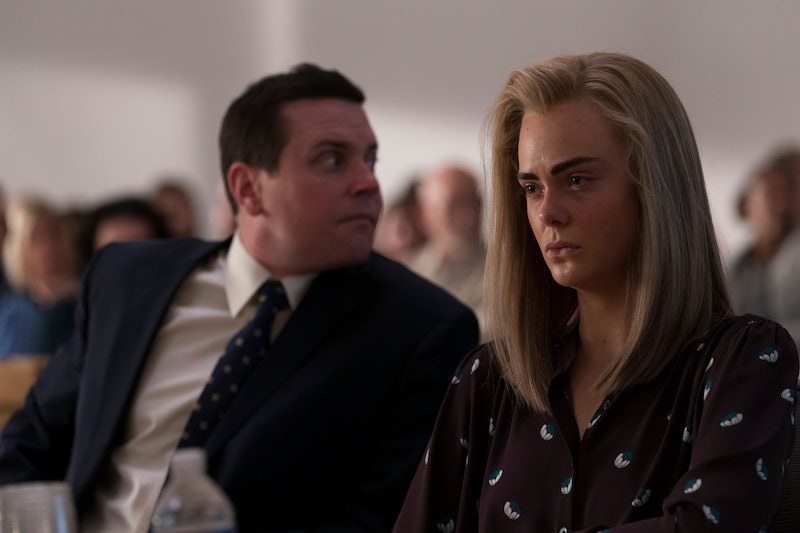 Hulu’s The Girl From Plainville tells the tragic true story of Conrad Roy III, an 18-year-old who died by suicide in 2014. The case gained national attention due to the controversial role of his girlfriend Michelle Carter and the trial’s potentially precedent-setting outcome, which suggested that someone’s words can be legally considered the direct cause of another person’s suicide.

For those unfamiliar with the details of the case, Roy was found dead in his truck on July 13th, 2014, parked outside a Kmart near his hometown of Mattapoisett, Massachusetts. He’d been struggling with his mental health for years: He had attempted suicide in the past and was on anti-depressants to help with his depression and social anxiety. However, it didn’t take long for the investigation into Roy’s death to turn to Carter, his then-17-year-old girlfriend who’d exchanged messages with Roy in the days and weeks leading up to his death encouraging him to die by suicide.

Carter and Roy first met in 2012 while they were both visiting relatives in Florida. They quickly bonded over their shared mental health difficulties — like Roy, Carter had a long history of depression and was also diagnosed with an eating disorder. Although their Massachusetts hometowns weren’t far apart, the couple only saw each other in person five times, and the vast majority of their relationship took place through text messages, phone calls, and emails. At first, Carter encouraged Roy to seek treatment for his suicidal thoughts, but during the summer of 2014, the nature of her advice shifted dramatically. She even went as far as to offer to help Roy plan and carry out his suicide.

On the day of Roy’s death, the pair exchanged numerous text messages in which Carter repeatedly told her boyfriend to die by suicide, even giving him instructions about where and how to do so. When Roy expressed hesitation about the plan and how his family would cope with his death, Carter continued to encourage him to go through with it. In what would later become one of the more damning facts in the case, Roy tried to pull out while in the middle of carrying out his plan, but Carter reportedly told him over the phone to press on.

After those communications between Carter and Roy came to light, she was indicted for involuntary manslaughter in February 2015, seven months after Roy’s death. By the time Carter’s trial began over two years later in June 2017, news of the case had spread across the country, and many legal experts were shocked when Carter was found guilty and sentenced to 15 months in prison. Her sentence was temporarily suspended while her appeal was reviewed by the Supreme Judicial Court of Massachusetts, but they upheld the ruling and she entered prison in 2019. Carter was released in January 2020 after serving approximately 12 months of her 15-month sentence and has stayed out of the spotlight in the years since. She’s still finishing up her five years of probation, which is set to end on Aug. 1, 2022.

More like this
Where Is Oscar Torres In 'Only Murders In The Building' Season 2?
By El Hunt
Yinka Bokinni Recalls Terrifying Truth At Heart Of 'How To Hire A Hitman'
By Frances Stewart
'The Undeclared War' Spotlights The Real-Life Threat Of Cyber Attacks
By Maxine Harrison
The “Beatrice Six” Were Awarded $28 Million After Their Wrongful Convictions
By Brad Witter
Get Even More From Bustle — Sign Up For The Newsletter