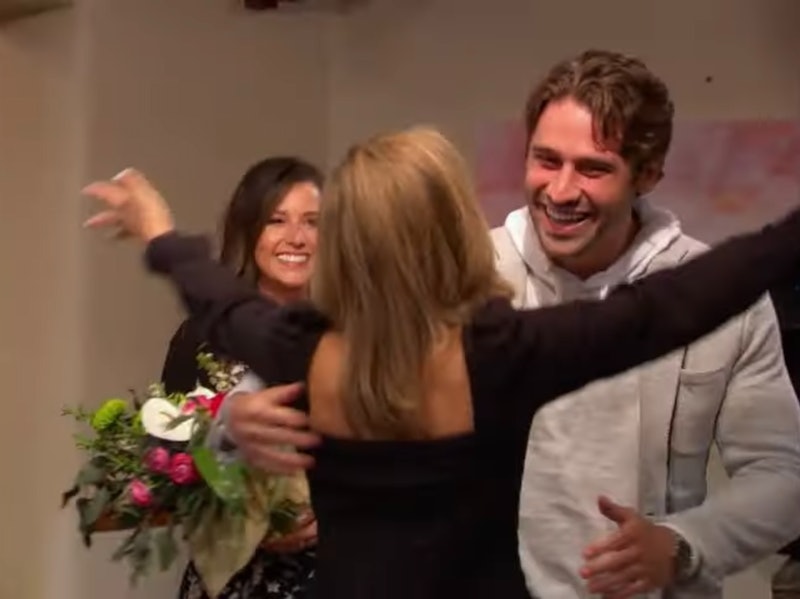 Bachelorette Katie Thurston is already well aware of Greg Grippo’s pasta necklace-making niece, but during the Aug. 2 hometown dates, she’ll meet a different member of his family: his mom Sandy Grippo. In a sneak peek of the episode — during which Greg and Katie will apparently share a heated exchange — Sandy tells Katie that she’d worried her son’s “heart’s gonna get hurt.” Katie’s reply? “At the end of this, everybody gets hurt except one man.”

Greg’s mom isn’t the only one protective of him. The New Jersey native is extremely close with his family, including his brother Frank Grippo III (aka Joey) and two sisters, Andrea Ferraro and Samantha Collova. Sandy, a grandmother of seven who works as a wellness marketing executive, notes in her Instagram bio that she’s “OBSESSED” with her family, who’ve been through a lot together in the last few years.

As Greg explained on The Bachelorette, his father, Frank Grippo Jr., died in December 2018 at 60 years old after an almost year-long battle with Stage 4 Adenocarcinoma. According to a GoFundMe page the Grippo family created to pay for alternative cancer treatments, doctors discovered a tumor on Frank Jr.’s liver in February 2018. According to his obituary, he was originally given three months to live, but survived for a year instead.

The day after his dad died, Greg posted a tribute on Instagram, writing, “I know you’re still with us. Love you forever.” He posted another Instagram picture of his dad after opening up to Katie — whose dad also died — about the loss on The Bachelorette. “Taking the time to remember all the good times today and realizing no matter how bad things may seem, you’re never alone,” Greg captioned a series of fishing photos, noting that many Bachelorette viewers had reached out to him after the episode. “Thanks to all who took the time to show support and share their own stories with me this week, it’s appreciated more than you know.”

At the time of Frank’s death, he and Sandy had been married for 35 years. Greg noted in his Bachelorette bio that his parents “set his definition of #romancegoals,” and that because of them, his “standards for what a successful marriage looks like are sky high.” According to his obituary, Frank also “sought to instill in his children a zest for life, a commitment to loved ones, and the power of a smile.”

Beyond that, Greg’s sister Samantha made headlines earlier this season after calling Katie out on social media. When Katie liked an Instagram post about Greg’s rumored acting aspirations, Samantha replied in a since-deleted comment that she was “really disappointed.” (Greg hasn’t addressed the rumors, but did post on Instagram in May 2019 about the William Esper Studio acting school).

There is some more positive news for the Grippo family, though: Greg recently joked on Instagram that his niece is now taking pasta necklace requests.

More like this
Everything To Know About 'RHONY' Season 14
By Jake Viswanath, Alyssa Lapid and Brad Witter
Rachel Fuda Gave Birth Just Weeks Before 'RHONJ' Season 13
By Brad Witter
Yes, That's Christina From 'The Bachelor' In Taylor Swift's "Fifteen" Music Video
By Brad Witter
All The Clues About Aly & Zach’s Relationship Status After 'The Bachelor'
By Brad Witter
Get Even More From Bustle — Sign Up For The Newsletter
From hair trends to relationship advice, our daily newsletter has everything you need to sound like a person who’s on TikTok, even if you aren’t.