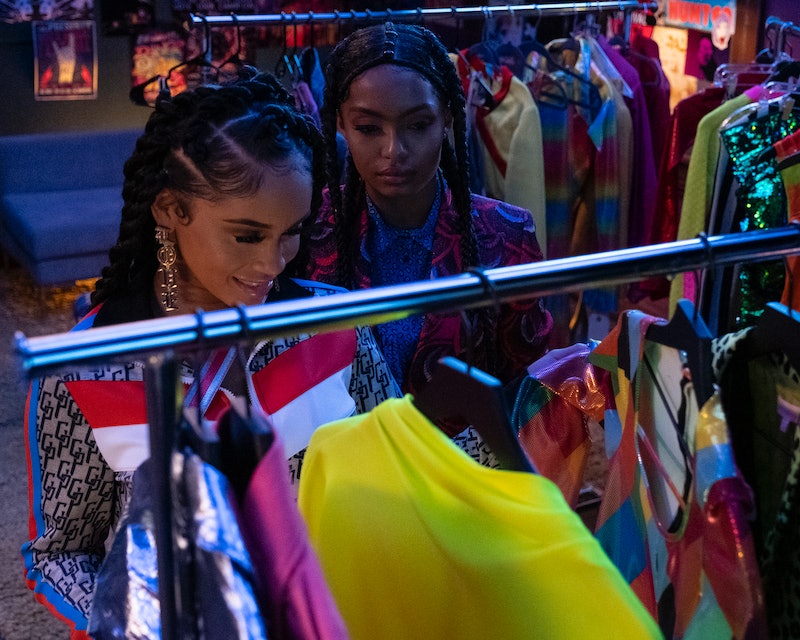 Following his arrest for protesting CalU's investment in private prisons, Aaron decides to make an even bigger statement in grown-ish's Feb. 4 episode. For that, he enlists the help of Zoey, who previously schooled him about how organizations like the Black Panthers and suffragettes used fashion to unite people around their movements.

"I feel like that's what I need right now," Aaron explains after botching a talk show interview with Angela Rye. "I need something that people can wear that unifies them, but also send a clear message." So, the two recruit the rest of the student body to wear orange, prison-style jumpsuits emblazoned with the word "student" to a peaceful on-campus protest.

This is, indeed, representative of a long history in using fashion as protest. Early 20th century suffragettes wore the color white to signify their involvement in the movement, and that symbolism is still employed today. In 2017, the House Democratic Women's Working Group asked members to wear white to a presidential address Donald Trump gave to congress as a unified show of support for women's rights. The group similarly invited women from both parties to wear white to the 2019 State of the Union.

Dating back to the 1960s, civil rights protestors wore denim — the standard uniforms for Black sharecroppers in the rural South — in order to align themselves with the working class and push back against respectability politics, while others dressed in deliberately sharp clothing to challenge negative stereotypes that Black people were poor and primitive. The Black Panthers also wore a "uniform" that typically consisted of a black leather jacket, black pants, powder blue shirts, an afro, dark sunglasses, and a black beret meant to convey a symbol of militancy and power. Years later, Beyoncé paid homage to this look during her 2016 Super Bowl halftime performance as tribute to the Black Panthers and the Black Lives Matter movement.

Jennifer Lopez made a similarly political statement during her own Super Bowl halftime performance in 2020, wearing a cape with the American flag on the outside and the Puerto Rican flag on the inside while she and her daughter Emme sang "Born in the USA." Other recent examples include the pink pussyhats worn at the 2017 Women's March in Washington, D.C., as well as the jewel-toned suits that President Kamala Harris, Michelle Obama, and Hillary Clinton donned at the 2021 presidential inauguration as a show of unity.

As Zoey says in grown-ish, American colleges and universities have historically been "hotbeds of social change and grassroots political movements," including protests for "everything from student loan debt to sexual assault to police brutality." Now, thanks to her and Aaron's "fashion for purpose," she can add private prison divestment to the list.

More like this
Man Meets Politics: ‘Boy Meets World’ Star Ben Savage Is Running For Congress
By Jake Viswanath
This 'Bachelor' Contestant Had The Best Reaction To Wearing The Same Dress As Another Woman
By Grace Wehniainen
15 Of Carrie Bradshaw’s Best Handbags From Sex & The City
By Dominique Norman
'Emily In Paris' Lucien Laviscount & Lucas Bravo Owned Paris Fashion Week
By El Hunt
Get Even More From Bustle — Sign Up For The Newsletter
From hair trends to relationship advice, our daily newsletter has everything you need to sound like a person who’s on TikTok, even if you aren’t.