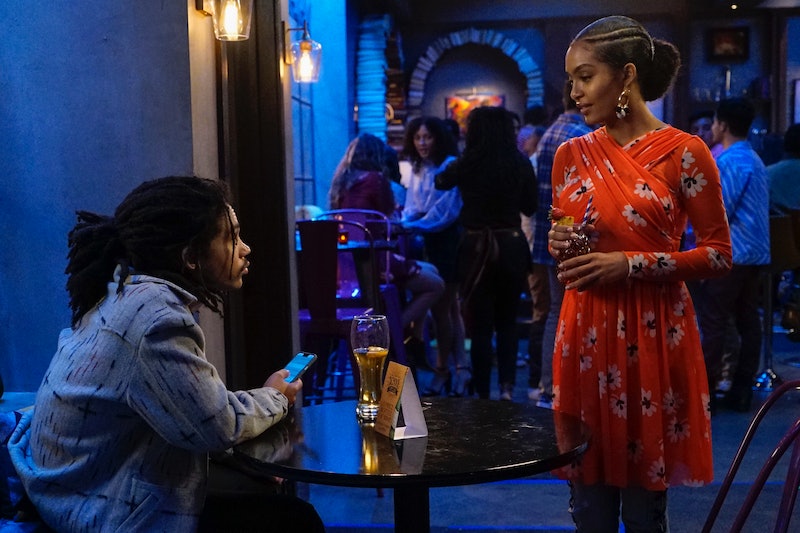 Everybody knows the struggle. You get a text from an ex, feel a little nostalgic, and suddenly you're in your feelings more than Drake. (Thanks, T.Swift.) That all-too-relatable emotional roller coaster was perfectly represented by Zoey & Luca's backslide on grown-ish's Thursday, Feb. 6 episode, "Thinkin Bout You," as they dealt with the fallout of their spontaneous kitchen counter hookup.

While many might have their own definitions of the term, for Zoey, backsliding means "sex with an ex," or as she elaborated in the episode, "a familiar clothing-optional walk down memory lane that somehow always manages to take you by surprise." As far as Doug was concerned, there are three reasons why people backslide: "They're either drunk, desperate, or still in love."

Whatever the cause, the resulting emotions — much like grief — come in stages, and the Freeform series broke them down as follows.

OK, so assume you've given in to that desire for the warmth of an old flame. "Big Zo Zo" (is that going to be a thing?) described that "intoxicating feeling of riding high" you've probably experienced post hookup, but her followup observation was probably just as familiar. "It's only a matter of time before the thrill fades, and the sex hangover kicks in, sending all other emotions crashing down on you," she opined. For Luca, that manifested itself in composing — and swiftly deleting — countless text message drafts to his ex.

While we all know the truth deep down, defending our actions to well-meaning friends usually brings about the denial stage. Luca insisted to Jazz (who claimed to be "1,000% Team Zuca, by the way) that he, Zoey, and everybody, for that matter, were "all good." But the pressure of Jazz telling him that "three days is a really long time to go without communication for a backslide," he settled on a simple, "Yo." (Yes, with a period.)

Thus began the confusing attempt at interpreting and reading between every single line. Zoey told her girls she "preferred three days of silence" over Luca's ambiguous message. Zoey explained that she'd spoken "friends Luca" and "dating Luca," but had now found herself "obsessing over Luca's one-syllable "yo" text."

Over-thinking, then, can often times lead to major regrets. Sure, you may have convinced yourself that the backslide would just be something fun that you could totally handle without emotional attachment. If that ends up not being that case (and, let's be honest, it often does not), however, it may feel like a huge mistake that causes you to begin beating yourself up.

It didn't help Zoey's state of mind that Nomi was sure Luca's text was just about "a little booty call." Sky, of course agreed, explaining: "Any text coming from your ex that starts with "yo," after you've had no communication with him since your backslide, only means one thing: He wants to smash again."

However well crafted the followup text you eventually came up with may have been, a delayed — or, worse, lack of — response can send your heart and mind racing in many different directions. After Zoey dragged her feet in responding to Luca's message, he ditched a study session with Doug and Jazz to channel his feelings into his art. When Doug showed up at his place and asked if he was good, Luca responded, "No, I'm not good, alright? I messed up. I shouldn't have sent that text to Zoey."

Then, all the second-guessing can lead to a shame spiral. Luca told Doug he couldn't believe he'd put himself out there with his text, blaming Jazz for getting in his head. While stressing over why Zoey hadn't hit him back, he lamented how "two stupid little letters transferred all the power back to her." (Doug aptly questioned, however, why Zoey would blow him up over a "yo" text.)

Zoey eventually did respond with the ever-dreaded "we need to talk" text, though. As Doug said, "Nothing good ever came from two people having to talk."

When Jazz informed the group of Luca's struggle to compose a simple text, self-described "empathetic human being" Zoey said she didn't want to seem thirsty, but now she felt awful. "I wanted us to be on the same page about this adult, very fun, very casual thing we did on the kitchen counter," Zoey admitted to her friends. "That last thing I'd want to do is hurt someone I love."

And, yes, she said she does love him. "You don't just stop loving someone that you were with pretty intensely for a year. And we had a very, very intense year," Zoey told her girls. Then, of course, there's that million-dollar question: Do you want to get back together with your ex? For Zoey, it was a big, "I don't know."

The backslide self-blame hit Luca hard, as he contended with the fact he'd brought this on himself. After all, it took him all summer to "get over the embarrassment of running after" Zoey before she jetted to London for her gig with Joey Bada$$. His admission to Doug that "of course" he still loves Zoey, led him to need some fresh air to "figure out what's what."

And by "what's what" he apparently meant jumping back into bed with Star alum Ryan Destiny's character Jillian. Zoey's anger stage kicked in after she knocked on Jillian's dorm room for Ana's voter registration drive, and saw Luca putting his tank top back on. Awkward. "Are you f*cking kidding me?" Zoey asks viewers, breaking the fourth wall. "So while I've been stressing about how Luca feels over our backslide situation, he's apparently slid into another one."

Finally comes the inevitable "talk." Luca showed up at Zoey's house to apologize for her having to see him in Jillian's dorm room. For her part, Zoey expressed her confusion and fear that they were on the path to hating each other.

"I guess we should just call this what it is, huh? The end. Big end," Luca said. Despite later telling Doug that he'd wanted to have "this whole complicated conversation," Luca told his friend, "No matter what was said, there's just no point. I already know how this story ends."

Zoey may have summed it up best: "When it comes to a backslide, after the initial high, after you've ridden the emotional roller coaster, in the end, all you're left with is the pain. And ultimately the only way to fix that pain is to walk away from the roller coaster or person who caused it for good." Or, of course, until it happens a second or third time, and the cycle begins all over again.