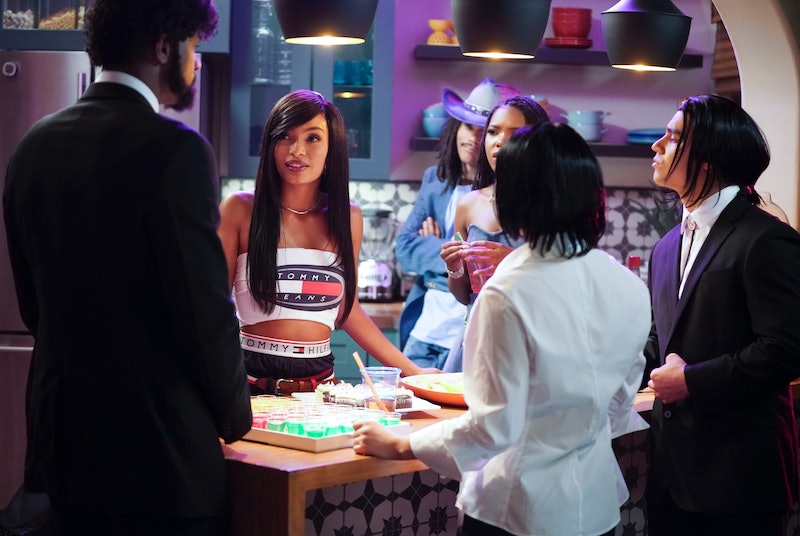 To be fair, most people don't make the best choices on their 21st birthday, but Zoey's decision to leave CalU on grown-ish's spring finale may rank up there as one of her worst. Kicking off the March 5 "Age Ain't Nothing but a Number" episode dressed, of course, as Aaliyah for her '90s-themed birthday party, Zoey called turning 21 "the official milestone that ushers you into adulthood." So when it came time to blow out the candles on her cake, an existential crisis led her to hyperventilate and pass out, of course.

"What does someone wish for when they already have it all?" Zoey wondered before her full-blown panic attack. But prepping for the huge tour Joey Bada$$ "dropped in [her] lap" while also juggling schoolwork was a balancing act "your girl" was afraid she couldn't handle anymore. After Aaron (costumed as Samuel L. Jackson's Pulp Fiction character Jules Winnfield) extended an olive branch following their recent argument, he gave Zoey the advice she needed to figure out her plan of action.

"You have your whole entire life to do all the things that you want to do," Samuel L. Aaron Jackson told Zoey. "You can't attack everything at once."

Returning to the party, Zoey explained to her crew that she'd realized she needs to stop trying to juggle everything. Because she's apparently an overnight expert on adulthood, she decided she'd "outgrown" CalU and decided to drop out of college, rather than quit her "dream job of being a stylist." Her logic was that spending another year at CalU would just be a waste of money and career momentum since she'd already begun achieving her professional goals without a degree.

And, hey, for the first time, she doesn't have to answer to anyone except herself anyway, she said. We'll see what Dre and Bow have to say about. As Zoey revealed during her meeting with Charlie, however, she didn't consult her parents whom she acknowledged might not be "in agreeance" (uh, understatement) with her decision.

Although Charlie asked her to take a week to think about it, Zoey revealed to Aaron that she'd pulled the trigger anyway and was already "officially no longer a CalU student." Although helping her arrive at that decision certainly wasn't his intention, he told Zoey he was going to miss her before pulling her in for an epic goodbye kiss. "Now we're even," he told her, referencing their airport lip lock from the Season 2 finale.

In the past, that probably would've led Zoey to quickly question her decision, but she seemed steadfast in going out there and making those dreams come true for herself. Just as work allowed her to put her drama with Luca and Aaron far from her mind, working full-time for Joey may have the same effect.

While it's unclear where grown-ish will pick up when it returns from hiatus, chances are the huge campus shakeup will still be playing out. Zoey could be out on the road with Joey, or just working on conquering the styling world, but she probably won't be at CalU. That is, of course, unless she's just a really frequent visitor. Honestly, though, it's hard to imagine that Zoey won't re-enroll, and sooner rather than later, to risk graduating behind all of her friends. Bow and Dre could also play a role in a swift return after they find out what she's done.

Or maybe she and Nomi — whose water broke while FaceTiming with Zoey — will go back to college together. Either way, as Luca noted, CalU won't be the same without Zoey Johnson.

More like this
Here’s Why Danny Masterson’s Hyde Isn’t In 'That '90s Show'
By Brad Witter
Man Meets Politics: ‘Boy Meets World’ Star Ben Savage Is Running For Congress
By Jake Viswanath
'Friends' Star Maggie Wheeler Offers Support To Matthew Perry After Reading His Memoir
By Alyssa Lapid
Twitter Is Having A Field Day Over Mr Blobby’s Costume Selling For £62k
By Catharina Cheung
Get Even More From Bustle — Sign Up For The Newsletter
From hair trends to relationship advice, our daily newsletter has everything you need to sound like a person who’s on TikTok, even if you aren’t.