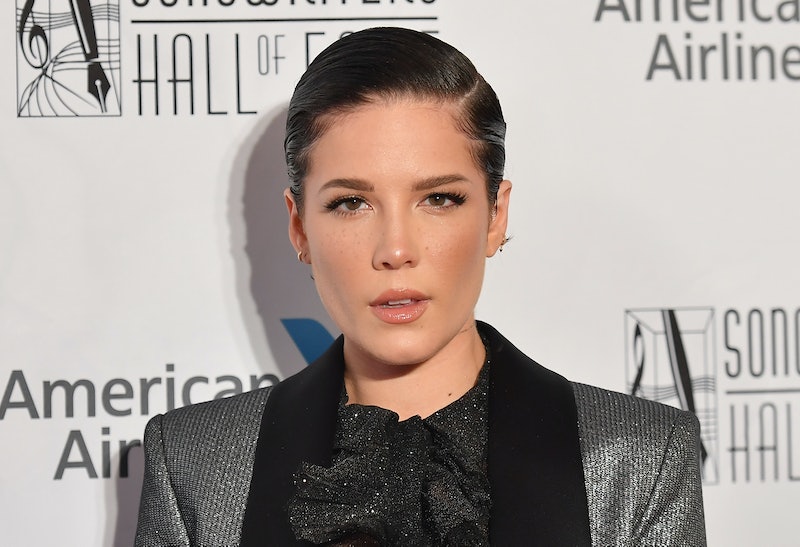 Two days after Halsey announced the birth their first child, the singer-songwriter took to Twitter on July 21 with another major announcement: She’s done speaking to the press. In a series of tweets posted early Wednesday morning, Halsey slammed Allure magazine for misquoting them and disrespecting their pronouns in Allure’s August cover story. “First your writer made a focal point in my cover story my pronouns and you guys deliberately disrespected them by not using them in the article,” Halsey wrote in a tweet, which has since been deleted.

In March, Halsey announced that they would be using she/they pronouns going forward. “For those asking RE: my updated Instagram bio, I am happy with either pronouns,” the “Without Me” singer wrote on their Instagram story at the time. “The inclusion of ‘they,’ in addition to ‘she,’ feels most authentic to me.” Allure acknowledged in the story that the pop star now uses she/they pronouns but chose to exclusively use she/her throughout the rest of the piece. Later, the story was amended to include both.

Halsey’s concerns went beyond the pronoun usage. “Then your admin bastardized a quote where I discuss the privilege of being the white child of a black parent,” she continued in more now-deleted tweets, adding that the magazine’s social media team “intentionally” manipulated her quotes. Halsey was alluding to a social media post, which Allure published on July 20 and has since been deleted. “Throughout her life, @halsey has struggled with her identity as a white passing Black woman (her mother is white and her father is Black). ‘A lot of people try to write off a lot of my experiences because I present white,’” the post said, according to Buzzfeed News.

While Halsey did say that their experiences are often invalidated, she felt as though the social media post took her quote completely out of context. The singer was trying to make a broader point that their struggles will never compare to the struggles of those who are not white-passing. “No matter how many tears I’ve shed because I’m not connecting with my family or my culture in a way that I would like to, or because the waitress thinks I’m the babysitter when I go out with my family, none of that would compare to the tears that I would shed for presenting phenotypically Black and the disadvantages and the violence that I would face because of that,” Halsey told the magazine.

During the Allure interview, Halsey expressed to the journalist writing the cover story that they don’t like doing interviews in the first place: “I don’t do press anymore,” Halsey said to Allure. “I did, like, two interviews for my last album, which was 16 months ago. I just don’t translate very well in print. Even saying this is going to get me in trouble. I already know that it is.” In Halsey’s series of tweets, they added, “All of this ironically on the tails of an article where I give your author the intimate admission that I hate doing press because I get exploited and misquoted,” the “You Should Be Sad” singer continued. “Do f*cking better….?” Halsey closed out their tweets by promising never to do a formal interview again: “#NoMorePress goodbye.”

It’s been a busy week for Halsey in the news. Halsey also announced the birth of Ender Ridley Ayden on July 19. “Gratitude. For the most ‘rare’ and euphoric birth,” they wrote alongside a photo of her holding her baby in her arms as her boyfriend Alev Aiden looked on. “Powered by love.” Ender was born on July 14.

Halsey first announced that she was expecting in January by unveiling an ethereal pregnancy photoshoot on Instagram. “Surprise,” she wrote, alongside the baby, milk bottle, and rainbow emojis. The news was indeed a surprise to fans, but in March, she revealed that the pregnancy was “100 percent planned.” Still, most people didn’t even realize that she was dating Aydin. That is, until the Los Angeles writer, producer, and director commented on the singer’s pregnancy announcement. “Heart so full. Love you, sweetness,” he commented, to which the singer replied, “I love you!!!! And I love this mini human already!”