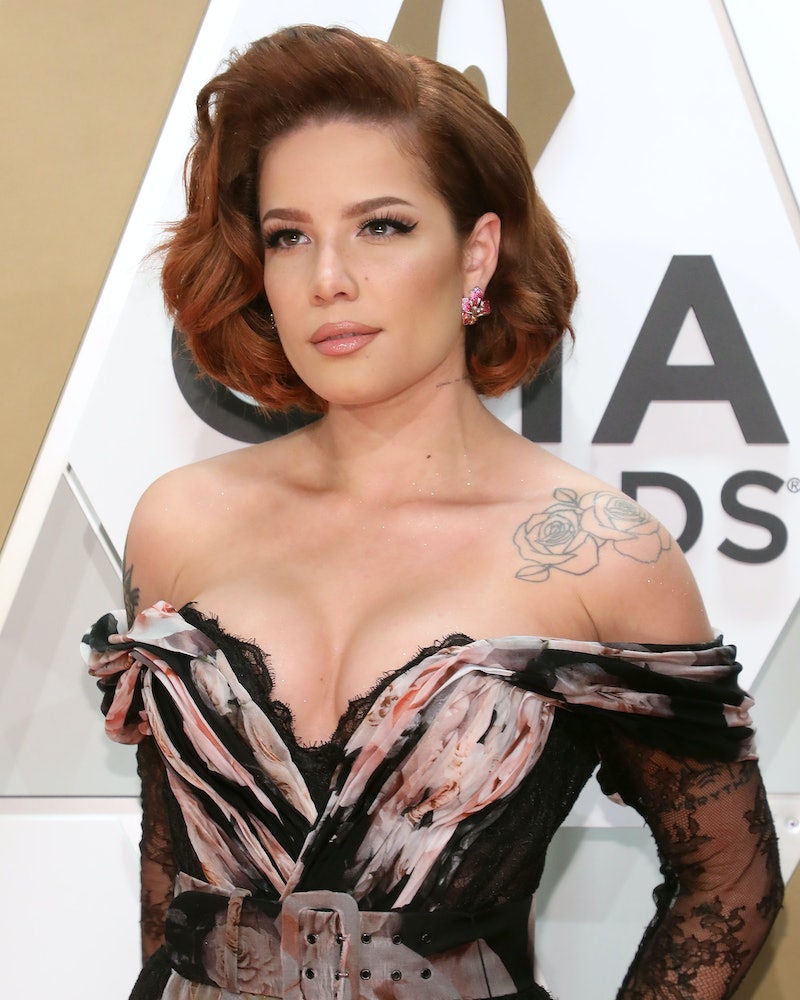 Halsey has welcomed their first child, and the baby name will certainly turn some heads. Halsey announced in a July 19 Instagram post that she had given birth to Ender Ridley Aydin on July 14, sharing a photo of her cradling Ender in her arms at the hospital as boyfriend Alev Aydin looks on lovingly. “Gratitude. For the most ‘rare’ and euphoric birth,” she wrote. “Powered by love.”

Halsey’s big news was met with immense excitement from both fans and stars alike. Demi Lovato commented on the singer’s post, writing a simple “Congratulations!!!!” while Olivia Rodrigo left a sweet message for the couple. “The most beautiful family! congratulations,” she wrote, complete with red heart emojis. Katy Perry, who welcomed her first child Daisy Dove Bloom in August 2020, also commented on the post, writing “The blessing” with a heart emoji.

In their announcement post, Halsey did not specify the biological sex of Ender. This comes after the “Without Me” singer said that pregnancy has given her a new outlook on gender identity in February. “I thought pregnancy would give me very strong, binary feelings about ‘womanhood,’” they wrote on Instagram. “But truly, it has leveled my perception of gender entirely. My sensitivity to my body has made me hyper aware of my humanness and that’s all.” As a result, Halsey changed her Twitter pronouns to “she” and “they” in March. “The inclusion of ‘they’ in addition to ‘she’ feels most authentic to me,” Halsey explained in an Instagram story.

This marks the first child for Halsey and Aydin. Halsey had announced that she was expecting in January by unveiling a pregnancy photo shoot. “Surprise,” she wrote, alongside the baby, milk bottle, and rainbow emojis. The news was indeed a surprise to many, especially fans who didn’t realize that she was dating Aydin, a Los Angeles writer, producer, and director. While he hasn’t shared the news of the birth on his own Instagram yet, Aydin did comment on Halsey’s pregnancy announcement, making his own gratitude very clear. “Heart so full. Love you, sweetness,” he wrote, according to US Weekly, to which the singer replied, “I love you!!!! And I love this mini human already!”

Halsey and Aydin’s relationship dates back to March 2019, when Aydin thanked the singer for taking him to an NBA game on Instagram. However, it’s likely that they were just friends at that time, considering that she was linked to singer Yungblud and actor Evan Peters in the months following. Halsey only confirmed their romance in her January pregnancy announcement, but it likely started prior to June 2020, when they got matching tattoos without anyone finding out. In March, she told fans that her pregnancy with Aydin was “100 percent planned.”

Ender’s birth comes at a very busy time for Halsey, who just announced that her fourth album, If I Can’t Have Love, I Want Power, will be released on Aug. 27. On July 8, she unleashed the beautiful NSFW album cover, which shows her on a throne with a child after breastfeeding, revealing that the record was a concept album about “the joys and horrors of pregnancy and childbirth.” If I Can’t Have Love will also be accompanied by an hourlong film, directed by Colin Tilley, that will premiere in IMAX theaters the night of the album’s release. But contrary to her album title, with the arrival of her first child, it seems that Halsey has found that love.

On September 30, the singer celebrated their 27th birthday by posting two images of Ender smiling and sporting a colorful matching onesie, sock, and beanie set. Although Halsey has shared images of the two month old in the past, prior images had carefully concealed the child’s face.

“The best birthday gift there is,” Halsey captioned the post.

More like this
Meghan Trainor & Daryl Sabara Are Expecting Their Second Baby
By Jake Viswanath
Adam Levine & Behati Prinsloo Welcome Their Third Child Together
By Jake Viswanath
Bennifer's Relationship Timeline Now Includes A Grammy Date Night
By Jake Viswanath
Lizzo & Myke Wright's Relationship Hit A New Level With Their "Hard Launch"
By Stephanie Topacio Long
Get Even More From Bustle — Sign Up For The Newsletter
From hair trends to relationship advice, our daily newsletter has everything you need to sound like a person who’s on TikTok, even if you aren’t.