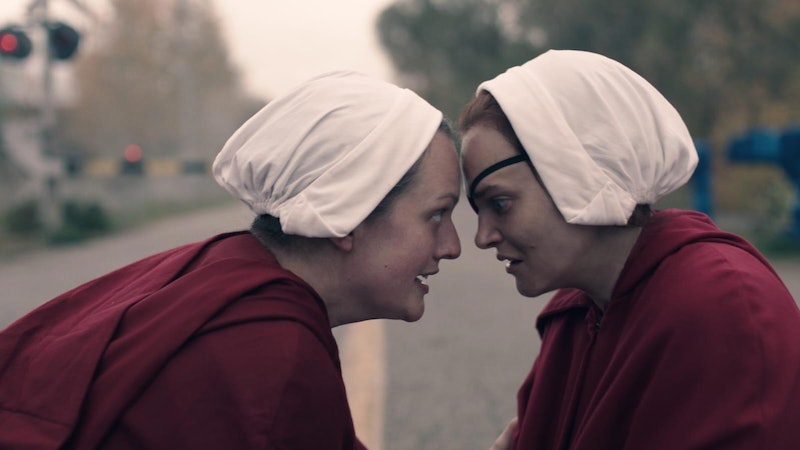 Spoilers ahead for The Handmaid’s Tale Season 4, Episode 5. Set against the overthrow of America by a Christian patriarchy, The Handmaid’s Tale is an ostensibly feminist story told from the perspective of the subjugated. But somehow, in its fourth season, the relationships scrutinized most severely are those between its women. We see this in the cruelty the Wives inflict on the Handmaids to get what they want (namely, babies); in June’s betrayal of her friends to protect what she loves most (her stolen daughter Hannah). It’s become an undeniable trope in the series that women will turn on each other as quickly as — or maybe even more quickly than — they do their male oppressors. June and Janine’s enduring kinship is among the few exceptions.

The two don’t have an equal friendship, but they do have one that’s recognizable to viewers, with their tenure extending back to the Red Center. June was with Janine when she lost her eye for insubordination in Season 1, and she literally talked Janine off a bridge as she coped with separation from her infant daughter. The rest of Boston’s defiant Handmaids somehow elected June to lead them, but June’s relationship with Janine evolved less decisively — a natural pull between women with shared experiences and underlying compatibilities. They’ve been students together and sex slaves and rebels. Female friendships that span lifetimes can take many forms. June lost two daughters to Gilead’s barbaric child separation policy; Janine, warm as she is naive, needed a mother.

In the May 12 episode of The Handmaid’s Tale, the pair finally explores Chicago — purportedly the front of a war between Gilead and what’s left of America. In truth, Handmaids are waging braver, more damaging offensives from inside occupied cities. For June, going to Chicago is as anticlimactic as reaching Oz. For Janine, it’s the opportunity to define herself as separate from June. She can continue to accompany her friend on the reckless pursuit of the good fight, or she can make a life for herself amongst the rubble.

It’s been difficult for Janine and June to find their footing since their last escape. June confesses to telling the Eyes where the Handmaids were hiding on the farm, a disloyalty that Janine balks at even when she learns that Hannah’s safety hung in the balance. “You would have done the same thing,” June spits at Janine, justifying her choice. She’s not Janine’s unassailable general here; she’s someone who craves approval. Janine feels emboldened not to give it. “You don’t know what I would have done,” she shoots back, rebellious.

The conversation devolves from there. June attacks Janine for past failings. Janine questions June’s authority. They are fighting about the future. They are fighting about everything that’s ever happened between them. The argument disintegrates fast and scornful in a way that feels familial; we can be most brutal to the ones we love. “I should have left you a long time ago,” June bites.

For better or worse, the fight is quickly forgotten (or at least ignored). June berates herself when she can’t protect Janine from the sexual advances of Steven, the rebel leader. Janine feels perversely accomplished when she gives Steven what June could not — a daughter looking up for approval. Outside of Gilead, the contours of their relationship crumble. June is unable to control Janine’s decisions in the free world, like when Janine attempts to trade her red cape — the only thing she owns — for a gift for Steven. So June warily adds her own cape to sweeten the deal, seemingly unable to deny Janine what material comfort she still has to offer.

Madeline Brewer, who plays Janine, compares the character to a dog, repeatedly shaking off trauma because “her biggest motivator is that she just wants to love and to be loved.” Elisabeth Moss’s June would likely say Gilead destroys all love.

Still, it’s June who is most intent to stay together. When she tells Janine that they’re departing the encampment to find Mayday, she’s frustrated that Janine wants to stay behind. For people who have meant so much to each other, the goodbye between them is terse, especially on June’s side. Yet only June cries. Hannah was taken from her; she had to give up Nichole. With no idea where she’s heading and if she’ll ever make it there, Janine was maybe June's last chance to be a mother.

Eventually, Janine finds June again and tells her that she feels safest when they’re together. June smiles and says come on. June has come to be a character defined by her authority — in earlier seasons she was willful, now she’s resolute. It’s hard to imagine her walking alone. But unlike the other Handmaids, Janine has never been one of her acolytes. Wives, Aunts, Marthas. In Gilead, women are sorted into classes and trained to be vicious to each other. Here, on the edge of the world that once was, June and Janine walk close, a portrait of female friendship as sincere as it is imperfect.