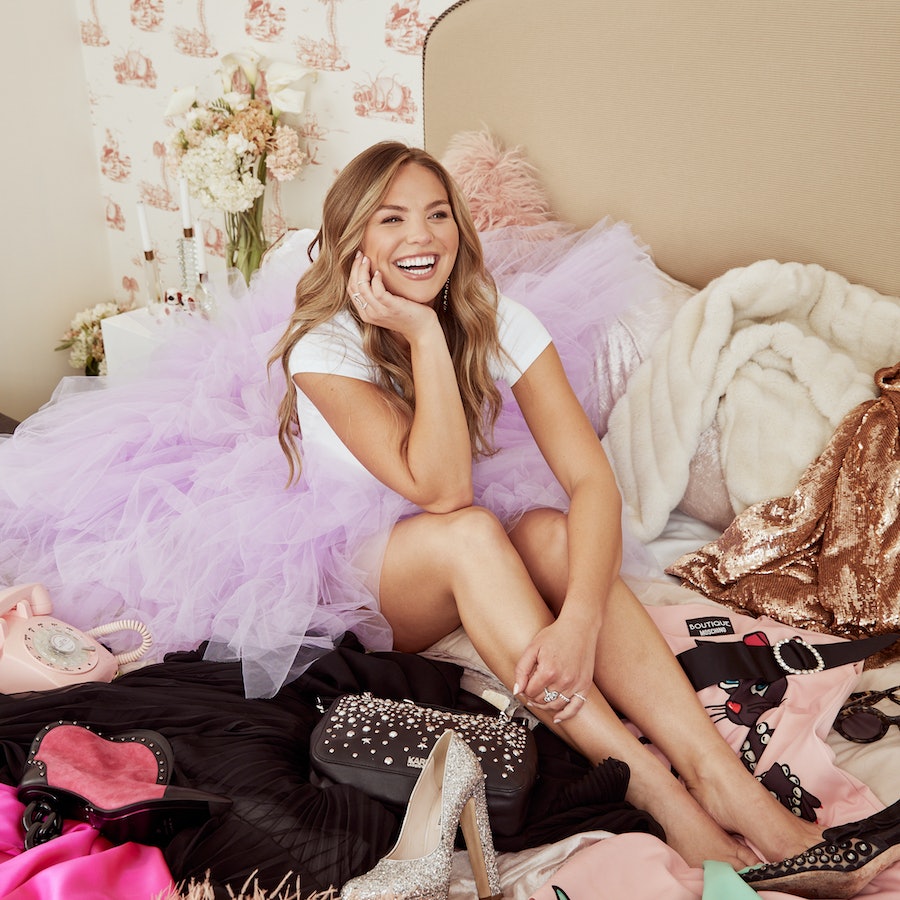 As the sun sets on a Santa Monica patio, Hannah Brown is doing some frank, expletive-laden reflecting. "In my life, all the crazy things happened in a compressed amount of time," she says. “There were a few years of my childhood where it just felt like shit hit the fan. And then at the end of high school and the beginning of college: Shit hit the fan. Then I got a few normal years and then shit hit the fan again. But you know, I’ve made it. Just like I made it then.”

Sitting comfortably outside a wine bar sipping a glass of Cabernet Sauvignon, Brown looks like someone who has never needed to make it; like she arrived fully formed. Her cozy rust sweater and layered gold necklaces are the things Instagram Saved Collections are made of — as are her cinnamon-and-tawny waves. Brown complains about her nails — “Ugh, they’re growing in!” — but her warm brown manicure would fit right in on an “Autumn Style [Leaf Emoji] [Sparkle Emoji]” Pinterest board. The word she uses most is “grateful,” with open-hearted earnesty.

“From the outside, I think my life has looked… you know,” she admits, nodding towards the string of accomplishments that have led to her face being splashed across the pages of magazines and appearing on entertainment talk shows since 2018. In three years, she’s catapulted from the small town Alabama pageant circuit to Miss Alabama USA 2018; from the bubbly blonde vying for Colton Underwood’s heart on The Bachelor to The Freakin’ Bachelorette; from Dancing With the Stars contestant weathering multiple tabloid crises to winner of the Mirrorball Trophy. Now, she’s settled into another seemingly charmed role as a former reality star in an endearingly Instagrammable relationship with a hunky model-entrepreneur. “But I’ve sometimes hinted at, with sneaky comments and stuff, ‘There’s been some hard things in my life that I’ve never talked about.’”

Her upcoming memoir God Bless This Mess, out November 23, makes good on the promise of giving Brown’s already complex public persona another dimension. Part irony-free Christian devotional, part exhumation of family trauma and unspoken inner turmoil, and part juicy Bachelor Nation confessional, the book is Brown’s chance to take ownership of a narrative that has often been packaged and disseminated for her — whether by Bachelor Nation producers, pageant judges, or the strict patriarchal Christian ideals of her hometown outside Tuscaloosa, Alabama.

“When you can’t tell your own story, [I’m] always living in what people think I’m supposed to be,” Brown says. In the book, she admits to feeling pressured to play the part she was given on The Bachelorette: She describes begrudgingly saying the franchise’s oft-repeated line about “seeing my future husband in this room” among dozens of suitors on night one when she really felt the opposite. But it was her off-script moments on the show that caused the most tension between Brown’s internal and external identities: like when she, a devoted Christian, became both the poster girl for sex positivity and the scorn of the Religious Right for her infamous comments to a slut-shaming suitor about how she “fucked in a windmill” during Fantasy Suite dates and “Jesus still loves” her. To make matters worse, Brown’s final pick, Jed Wyatt, was quickly revealed to be an opportunist who went on The Bachelorette with a girlfriend back home; Brown broke the engagement off before her Bachelorette finale even aired.

“When you’ve lived your life believing that your worth was in being good and right and just, what if people think of you the other way? I crumbled.”

A desire to break her habit of seeking validation in other people is a running theme of God Bless This Mess, as Brown traces her labored pursuits of perfection and the often anxiety-inducing fallout all the way back to her early childhood. Yet it took the intensity of the Bachelor franchise’s cameras and the often merciless real-life commentary they provoke to bring Brown to a breaking point. “I lived my life as a ‘good girl.’ I didn’t really make mistakes — make mistakes that people saw — up until I was in front of millions of people [on TV],” she says. The blowback from the religious community was particularly crushing. “When you’ve lived your life believing that your worth was in being good and right and just, what if people think of you the other way? I crumbled.”

Brown with partner Alan Bersten on Dancing With the Stars (L); Brown with ex-fiancé Jed Wyatt on The Bachelorette (R).

After over a year of therapy and a deliberate step back from Bachelor Nation, Brown is feeling sturdier. She beams at the knowledge that the person across the table from her has read her book, which she started writing before the pandemic began. But Brown also recognizes that claiming her most delicate moments for herself won’t be easy. She trips over her words at the mere thought of her parents reading Mess, although talking through certain events she planned to include in the book as a family was, in fact, “healing.” Then there are her fans, whom she knows will be titillated to read a certain shouldn’t-be-spoiled section of Mess that details a top-secret encounter between the ex-Bachelorette and former contestant Peter Weber in 2020, which ends in an awkward moment and regret.

When the subject is brought up, all she can do is laugh nervously. “I almost took it out,” she admits. “There’s truly only like two people that know that story.” Yet Brown says she’s divulging the tale not for the sake of juicy gossip, but as another step in owning her mistakes. “It just creates a better picture of where I actually was in my life and the decisions I was making and how desperate and broken I thought I was at the time,” she continues. “I had to have it in there. It’s relatable. There are a lot of women out there who can understand what that felt like.”

That relatability is fueling Brown after years of chasing what she calls a “sig hit,” tapping her arm to equate the obsessive hunger for significance with a twitchy addiction to cigarettes. Posting a photo to Instagram just to show people how good you look today (a prime hobby of social media influencers everywhere, Brown once included), is an example, she explains. “It’s not for anything else but just to feel significant. And I don’t want to do that anymore.”

So she’s chasing significance of a different kind; the kind that comes from sharing your most traumatic experiences with the world in hopes of bringing healing through connecting with others. Brown’s most heart-wrenching chapter in Mess details a long-suppressed family tragedy involving the murder of her aunt and two cousins, who were children around Brown’s age at the time. The specifics of the incident are devastating, and the lasting effect they had on a young Brown is so palpable that it’s hard to look at her the same way again. Though Brown has never discussed the story publicly until now and admits that she largely repressed it privately, she did bring it up to Bachelor producers in passing. In hindsight, she considers it a blessing that that part of her story never aired.

Not all the “mess” referenced in the book is quite so sympathy inducing. In the spring of 2020, Brown went through Bachelor Nation’s most public racism scandal before its ground-shifting reckoning earlier this year. “I never really thought about not [including it in the book],” she says of the incident in which she sang the N-word along to a rap song on an Instagram Live video. “Because it’s a part of my story. It was something that allowed me to grow and change in ways that I didn’t even know I needed to.” Two public apologies and a class with an “ethnic studies professor” later, Brown seems to know it’s an inevitable topic of conversation between us. She is, after all, talking to an Afro-Latina.

“I can’t deny the fact that I have privilege as a white woman — a white man would have more privilege than me — but, still, I have privilege that not all other people have. Do I think that is always deserved? No. No!” Brown says. Her private apology to Rachel Lindsay, the franchise’s first Black Bachelorette and one of the leaders in the push for diversity among Bachelor Nation, ultimately led Lindsay to forgive her after weeks of back-and-forth in the media. “Because my book’s titled God Bless This Mess, does that mean I want to just continue to... fuck up? No! I don’t.”

Still, Brown knows she is destined to “make mistakes.” Not the life-altering, painful ones she’s made already, but certainly other ones. The difference is that through therapy, she’s now committed to acknowledging and processing them with a desire to improve herself for the future. “It’s sometimes good to be knocked off, no matter how high that horse is, to really be humbled. And I can say that I’m truly humbled and I don’t feel my worth so much as [being] in [getting] recognition,” she says with a smile.

Instead, Brown is happy to focus on “doing life” with boyfriend Adam Woolard, 34, whom she met on a dating app about a year ago. She didn’t expect to find her romantic puzzle piece while swiping, but she’s now grinning at the thought of her “normal” love life, her dream two-bedroom, two-bathroom apartment, and the dog she hopes to get in the new year. “[The relationship] feels really safe, and I feel really appreciated for not just who I am, but what I want to become and who I’m meant to be,” she says. “[I’m] rooted in remembering my ‘why’ from the person who really respects me and wants to see me succeed.” Woolard, who previously worked in finance, is also noticeably outside of the Bachelor Nation fold. He’s never seen the show.

“There was a time where I was like, ‘I am so over [the Bachelor world]. I want to move on. I never want to talk to anybody.’ I’ve had ‘I love it.’ ‘I hate it.’ ‘I want nothing to do with it.’ And then ‘I want everything,’” Brown says. “I’m super thankful for that experience, but I’m moving on, and can’t wait to see how I continue to evolve and change and what new area I will explore.”

She knows her perspective is “different” from how others in the franchise “take the experience” (a polite way of nodding towards Bachelor in Paradise careerists and Bachelor Nation podcasters). “But I’m not just one thing,” Brown concludes. Following a few cameos on ex Peter Weber’s 2020 Bachelor season, Brown hasn’t appeared on a major network TV program save for a blink-and-you’ll-miss-it Celebrity Dating Game appearance this June.

So, for the first time since she pageant-walked onto the national stage with Miss USA, Brown is ready to let the future come as it will. That’s not to say she doesn’t have ideas about what she’d hope for — she’s still interested in being on camera outside of Bachelor Nation, and also muses about building a business empire. “But there’s also a part of me right now that’s really good with just taking the time to be with myself and love Hannah for the first time. Truly,” she says. “Because I’m only just now getting to know her.”