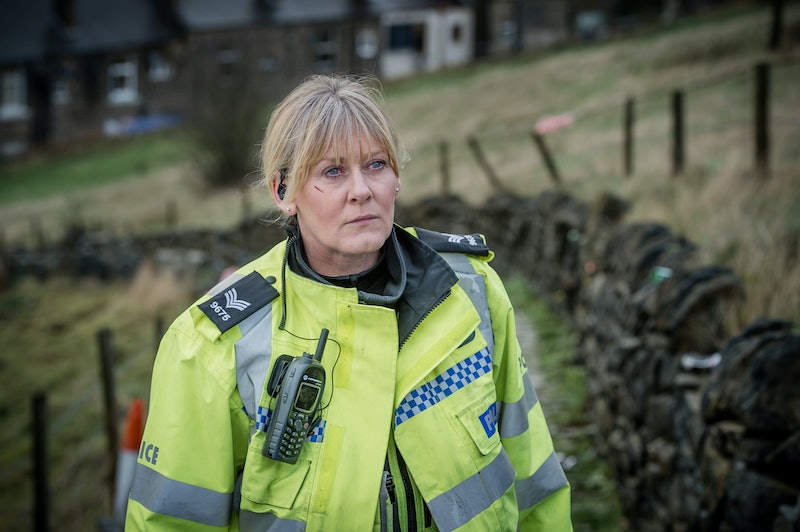 Set to capitavate viewers with its third and final series, Happy Valley will shortly return to BBC One. Fans of the show’s writer and creator, Sally Wainwright, may wonder whether another Gentleman Jack season is in the cards. While HBO axed the show in the summer, audiences are clinging on to hope that the BBC will commission a third season about the life of Anne Lister. In the meantime, though, Wainwright has connected her hit shows by giving viewers a special treat in the opening episode of Happy Valley, which Bustle viewed during an early screening, followed by a Q&A with the cast and crew.

Among the new faces introduced in Happy Valley Season 3, singer-songwriter Belinda O’Hooley appears briefly as a plain-clothes police inspector during a scene where notorious criminal Tommy Lee Royce (James Norton) is discussed. O’Hooley is from Yorkshire and is best known as one half of the musical duo O’Hooley & Tidow. And here’s where things get truly interesting, as Gentleman Jack fans will be very familiar with the duo’s musical stylings as they sing the theme song for the series.

Happy Valley and Gentleman Jack share more of a connection beyond O’Hooley’s involvement. The police drama was instrumental in enabling Wainwright to create a show about Anne Lister, which she’d initially optioned in 2002. But the writer had “yet to ascend to the point where I could do whatever I wanted,” as she told The Guardian. “That only happened after Happy Valley.”

It’s certainly been a long time since Happy Valley has been on our screens. But the long wait for Season 3 was intentional on Wainwright’s part. “I waited six years because I wanted to get to a point where Ryan (Rhys Connah) would be old enough to start making choices about whether he wanted to have a relationship with his dad or not,” she said in an interview with the Halifax Courier. The show’s villain, Tommy Lee Royce, is never too far away, and Sergeant Catherine Cawood (Sarah Lancashire) will have to deal with her grandson Ryan potentially wanting to connect with the man she “refuses to acknowledge as his father,” per BBC One’s synopsis.

More like this
'Happy Valley' Recreated This Moment From S1 In Its Penultimate Episode
By Sophie McEvoy
Con O'Neill Was Connected With Sarah Lancashire Long Before 'Happy Valley'
By El Hunt
9 Time Catherine Cawood Was An Absolute Badass In Happy Valley
By Sophie McEvoy
This Dark 'Happy Valley' Theory Is Staring You Right In The Face
By Sophie McEvoy
Get The Very Best Of Bustle/UK
Sign up for Bustle UK's twice-weekly newsletter, featuring the latest must-watch TV, moving personal stories, and expert advice on the hottest viral buys.