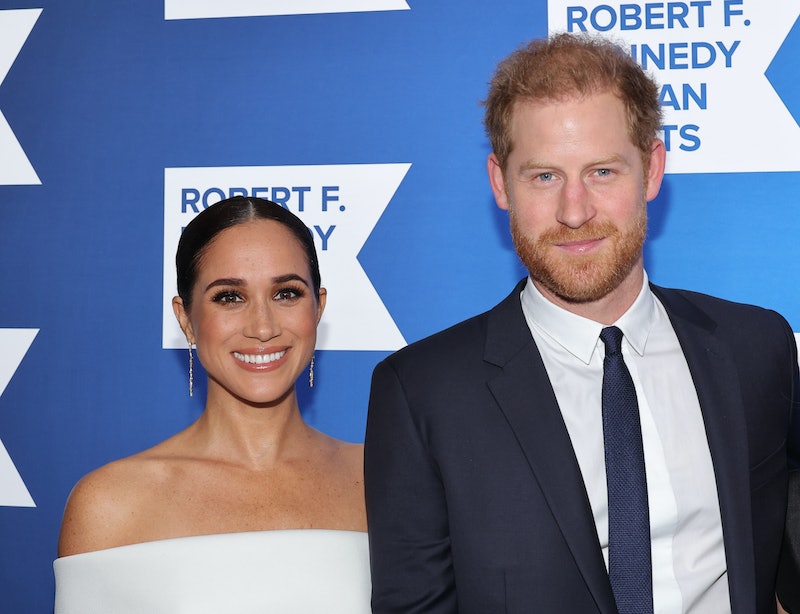 From the clandestine days of their early courtship to when they stepped back from their full-time roles as senior royals, Prince Harry and Meghan Markle share “the other side” of their high-profile love story in their new tell-all Netflix documentary, Harry & Meghan. Since the first three episodes of the six-part series dropped on Dec. 8, the Duke and Duchess of Sussex have been criticized for supposedly walking away from their royal duties out of privacy concerns, only to later put the ins and outs of their private lives back in the spotlight. Though the ongoing backlash frequently mentions the word “privacy,” Harry and Meghan’s January 2020 statement, however, did not, as the couple’s the couple’s global press secretary, Ashley Hansen, emphasized in the first public response following the docuseries’ release.

“Their statement announcing their decision to step back mentions nothing of privacy and reiterates their desire to continue their roles and public duties,” Hansen explained to The New York Times on Dec. 8. “Any suggestion otherwise speaks to a key point of this series. They are choosing to share their story, on their terms, and yet the tabloid media has created an entirely untrue narrative that permeates press coverage and public opinion. The facts are right in front of them.”

Indeed, after “many months of reflection and internal discussions,” Harry and Meghan announced on Jan. 8, 2020, that they intended “to step back as ‘senior’ members of the Royal Family and work to become financially independent, while continuing to fully support Her Majesty The Queen.” The couple explained they intended to balance their time between the United Kingdom and North America, noting that their move across the pond would provide their family “with the space to focus on the next chapter.”

The couple, who welcomed son Archie in May 2019 and daughter Lilibet in June 2021, went on to found Archewell Productions and sign their multiyear Netflix deal, which Deadline estimated to be worth between $100 million and $150 million. Their aim is to “produce programming that informs, elevates, and inspires” and to “utilize the power of storytelling to embrace our shared humanity and duty to truth through a compassionate lens,” per their company’s website.

As Netflix boss Ted Sarandos noted in a statement at the time, “Harry and Meghan have inspired millions of people all around the world with their authenticity, optimism and leadership,” adding, “We’re incredibly proud they have chosen Netflix as their creative home – and are excited about telling stories with them that can help build resilience and increase understanding for audiences everywhere.”

In Volume I of their first Netflix project, Harry & Meghan, the couple discusses their time as working senior royals, including the challenges. They even describe a toxic relationship between the British royal family and the press, with Harry saying that the newspapers within the Royal Rota feel it is their family “to exploit” and their “narrative to control.” For him, especially as a parent, “consent is a really key piece to this,” affirming that control, not privacy, has been their priority in this new chapter of their lives.

More like this
Meghan & Harry Respond To Jeremy Clarkson’s "Apology" Over *That* Column
By Sophie McEvoy
Helena Bonham Carter Doesn't Think 'The Crown' “Should Carry On"
By Sam Ramsden
Turns Out George Clooney Is A Huge Fan Of This Classic British Game Show
By El Hunt
A New Netflix Doc Will Explore The Unsolved Murder Of Jill Dando
By Sam Ramsden
Get Even More From Bustle — Sign Up For The Newsletter
From hair trends to relationship advice, our daily newsletter has everything you need to sound like a person who’s on TikTok, even if you aren’t.