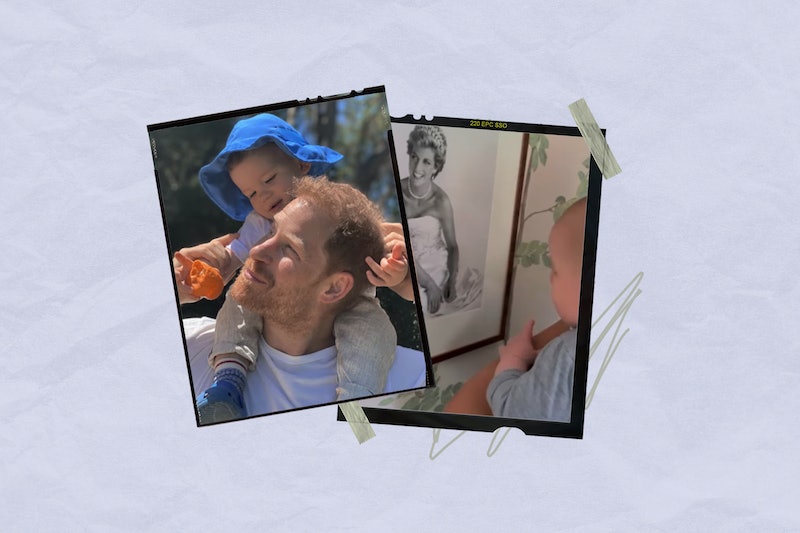 Meghan Markle and Prince Harry are opening up like never before. In their new Netflix docuseries Harry & Meghan, Volume I of which is now available to stream, the Duke and Duchess of Sussex give the first look at their life since leaving their posts as senior working members of the royal family, answering once and for all why they made the drastic decision. Naturally, fans had wondered if the six-episode doc would include the couple’s children, Archie Harrison Mountbatten-Windsor, three, and Lilibet Diana, one.

Though the primary focus of the documentary hinges on the inner workings of the royal family, and the pervasive influence of the media, the couple’s children do feature throughout. In an opening scene, we hear the voice of their first child Archie as he admires a “beautiful” sunset. Elsewhere, previously unseen footage shows the family laughing and joking as their son runs through a field. Another sees a baby Archie experiencing snowfall. An additional moment sees Prince Harry and Archie sharing a laugh when birdwatching. And we get to enjoy a candid moment of a sleeping Archie resting on Meghan’s stomach while she’s pregnant with their second child, Lilibet. We also learn that Archie’s favourite song is “Benny And The Jets” by Elton John. Such a candid look at family life is a real rarity from the private couple.

“We’ve been really conscious of protecting our kids as best we can,” Meghan says, “and also understanding the role that they play in this really historical family.”

Prince Harry reflects on the media intrusion he remembers from his own childhood in Episode 1, recalling a royal skiing trip in the ‘90s where he felt forced to perform for the media. Archival footage shows his late mother, Princess Diana, confronting a cameraman. Elsewhere in the episode, we see footage of Meghan showing a baby Archie a portrait of Princess Diana, which is hanging on the wall. “Who is that?” she says. “That’s your grandma Diana.”

“As a dad, and as parents, I think consent is a really key piece to this,” Harry then says, discussing his own children once more. “That if you have children, it should be your consent as to what you share.” The couple add that they do not want their children to have the same experiences that Prince Harry remembers.

Meghan and Harry welcomed their first child Archie in May 2019, just months before leaving their working posts in the royal family. After relocating to their current estate in Montecito, California, the couple welcomed Lilibet in June 2021. Their daughter was named after both Harry’s late mother Princess Diana and grandmother Queen Elizabeth II, who was called “Lilibet” as a nickname.

Prince Harry speaks about being proud to have mixed-race children, and the importance of making the world a fairer, more equal place for the next generation. "I think it is such a responsibility as human beings that, if you bring a small person into this world, that you should be doing everything you can to make the world a better place for them," he says.

More like this
Everything To Know About 'The Real Housewives Ultimate Girls Trip' Season 4
By Jake Viswanath
Andy Cohen Apologized To Larsa Pippen After A 'RHOM' Season 5 Reunion Dust-Up
By Brad Witter
'The Crown' Season 6 Has Suspended Filming "Out Of Respect" For The Queen's Death
By Bustle Staff
Love Is Blind’s Natalie Claims Shayne Signed Up For 'Perfect Match' While They Were “Still Together”
By Brad Witter
Get The Very Best Of Bustle/UK
Sign up for Bustle UK's twice-weekly newsletter, featuring the latest must-watch TV, moving personal stories, and expert advice on the hottest viral buys.