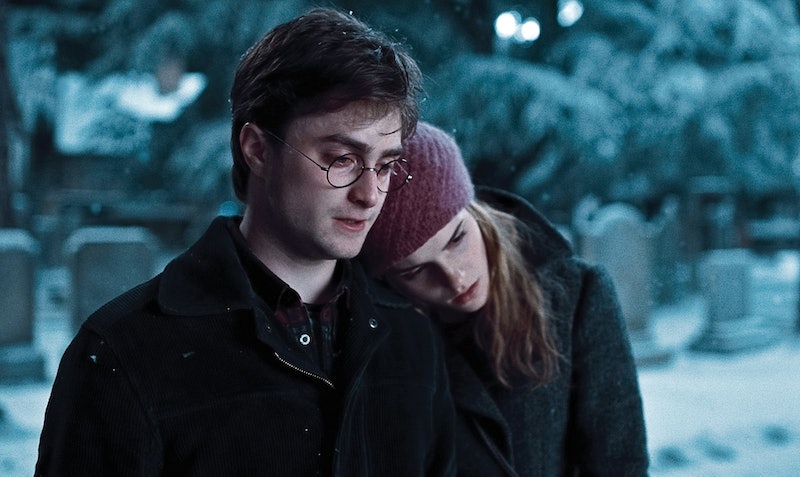 Over the past 20 years, Harry Potter fans have disagreed about, well, everything, but one of the most constant, consistent arguments is over the romantic pairings. While I try not to get too caught up in whether or not Neville and Luna should have ended up together in the end, I am a firm believer Hermione should have ended up with Harry, and I'm not the only one who thinks so. Everyone from J.K. Rowling to Emma Watson agree: Ron and Hermione's happily ever after was one of the series' greatest mistakes.

It has been over a decade since Harry Potter and the Deathly Hallows revealed in its epilogue that, 19 years after the Battle of Hogwarts, Hermione Granger and Ron Weasley are not only still together, but are married and have a family. I still remember my teenage self getting physically irritated — itchy skin, twitchy eye and everything — that Harry and Hermione didn't find true love together in the end. They could have been the perfect couple, and I'm not just saying that because I am still harboring my childhood crush for Harry, which I totally am. I'm saying that because it is true, and everyone knows it — including Harry, Hermione, and Ron's creator, J.K. Rowling.

"I wrote the Hermione/Ron relationship as a form of wish fulfillment. That's how it was conceived, really," the Harry Potter author said in the interview with Hermione Granger actress Emma Watson for Wonderland in 2014. "For reasons that have very little to do with literature and far more to do with me clinging to the plot as I first imagined it, Hermione ended up with Ron." What's more, Rowling went on to actually admit that Harry and Hermione should have been endgame.

In the same interview, Watson, who plays the brilliant young witch in the films and is as close to a real-life Hermione as anyone can get, agreed that she had her doubts about the pairing. "I think there are fans out there who know that too and who wonder whether Ron would have really been able to make her happy," she says, and she isn't wrong. I am far from the only Potterhead to believe Hermione and Harry would have been a much better couple.

It's not that I hate Ron. In fact, when I first read the books, he was one of my absolute favorite characters. I loved his big, chaotic family and his imperfect life, because it reminded me of my own crazy house. I thought he was the comic relief Harry and Hermione sometimes needed, and despite his most obvious flaws — laziness, selfishness, and stubbornness — Ron was an all around OK dude who I could see myself enjoying a pint of Butterbeer with.

But he's not anywhere near good enough for Hermione.

As Bustle's own Emma Lord points out, Hermione and Ron's coupling wasn't disappointing: it was dangerous. Their relationship is built on the misguided notion that men are mean to the women they like, and as Lord explains, it "speaks to a much larger truth in toxic relationships in which one partner is significantly less secure than the other." Hermione and Ron's romance set a dangerous example for young readers who could interpret their love as #relationshipgoals, when in reality, it was simply a bad match. Even Ron himself — or at least the actor who played him, Rupert Grint — admitted that he believed Ron and Hermione wouldn't last. "I would expect Ron has probably divorced Hermione already," Grint said in an interview with Huffington Post. "I don't think that relationship would have done very well."

But we will never truly know, will we?

What is done is done, and it seems that, although J.K. Rolwing is still cranking out one Harry Potter story after another, she has no intention of correcting her coupling mistake. If anyone is able to create Timetuner, then perhaps Potterheads can use it to travel back in time and convince a young Rowling to do the right thing. For now, there's always fanfiction.