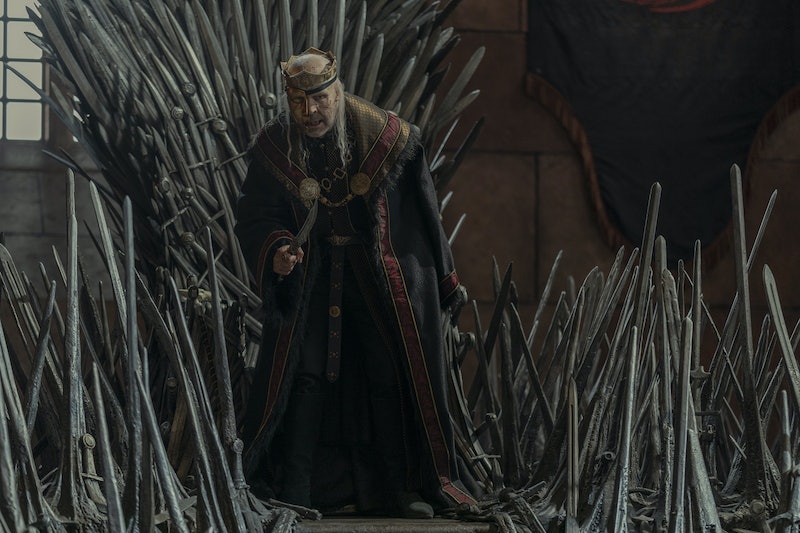 Spoilers ahead for House of the Dragon Episode 8. After weeks of wondering when King Viserys would die on House of the Dragon, viewers finally got their answer during Episode 8, “The Lord of the Tides.” The ailing king ultimately took his last breath during the show’s Oct. 9 installment, but not before accidentally setting a major Iron Throne conflict into motion. To recap: Rhaenyra approached her father, asking him to defend her (and her sons’) claim to the throne.

Later, in his final moments, Viserys cited Aegon the Conqueror’s dream and voiced his support for Rhaenyra’s ascension. “Aegon, his dream ... the prince to reunite the realm against the cold and the dark. It’s you.” Aw, what beautiful parting words! Only Viserys thought he was talking to Rhaenyra, but he was really talking to Alicent, who interpreted her husband’s words about Aegon to be about their (very awful) son.

This confusion was somewhat foreshadowed by that earlier chat with Rhaenyra, in which Viserys mistook his daughter for Alicent. But more than a mere mix-up, Viserys’ final conversation will have major implications for the Dance of the Dragons and the rest of The House of the Dragon’s run as we know it. Fortunately, House of the Dragon Season 2 has already been confirmed — and if the prequel series is anything like Game of Thrones proper, we’ll have much more family drama to come.

For now, of course, viewers are just processing Viserys’ death — and taking to Twitter to pay tribute to the rare solid patriarch in a franchise of messy families.

Many fans couldn’t get over the last-minute confusion — and the devastating effects it will have on the Targaryen family.

Others were emotional about Viserys’ final words, “My love,” which seem to be about seeing his late wife, Aemma, who died at the start of the series.

This is part of the Game of Thrones universe, so you may be wondering — is Viserys really dead? Indeed, director Geeta Patel confirmed to Entertainment Weekly, there’s nothing ambiguous about what you just saw. Viserys is gone after a mysterious, prolonged illness.

Paddy Considine reflected on his character arc in a new interview with GQ. “He was the only person in this kingdom who had any f*cking morals whatsoever,” he told the magazine. “He holds everything together as long as he absolutely can. I thought he was a joy to play.”

More like this
'GoT' Star Emilia Clarke Says She "Just Can't" Watch 'House Of The Dragon'
By Brad Witter
Netflix Shut Down 'Bridgerton' S3 Rumours About A “Very Dark” Storyline
By Bustle
Everything To Know About 'RHONY' Season 14
By Jake Viswanath, Alyssa Lapid and Brad Witter
'RHOSLC' Star Jen Shah Refuses To Do A Post-Sentencing Interview With Andy Cohen
By Brad Witter and Jake Viswanath
Get Even More From Bustle — Sign Up For The Newsletter
From hair trends to relationship advice, our daily newsletter has everything you need to sound like a person who’s on TikTok, even if you aren’t.