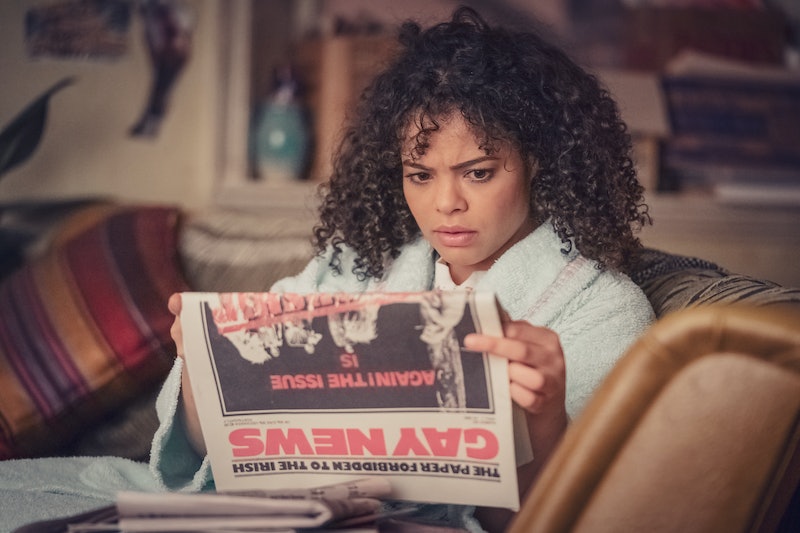 Channel 4's It's a Sin, the newest drama from acclaimed screenwriter Russell T Davies, examines the 1980s AIDS crisis in Britain though an eccentric but lovable friendship circle. Whilst writing the five-part series, Davies drew inspiration from his own experiences living in London during that time, and based much of the show on real-life events. But how historically accurate is It's A Sin? Here's a breakdown of some of the more shocking events and moments that feature in the series. Please note, this includes spoilers of the show.

During one scene of the Channel 4 drama, Ritchie's parents are watching a TV advert outlining the dangers of AIDS. They barely engage, seemingly unaffected by the disturbing broadcast. In it, the voice of actor John Hurt warns "there is now a danger that has become a threat to us all. It is a deadly disease and there is no known cure." A blackened gravestone engraved with the word "AIDS" then dramatically falls to the ground, followed by an information leaflet and bouquet of flowers — the type you'd expect to see at a funeral. "Don't die of ignorance," the voiceover ominously concludes.

The advertisement in question was a real ad, and a regular fixture on British television throughout the 1980s and released as part of the world's first-ever public health campaign on HIV and AIDS.

Per the BBC, the AIDS: Don't Die of Ignorance advert first began airing in 1986 in response to the growing HIV and AIDS epidemic in the UK. The Health and Social Security Secretary at the time, Norman Fowler, oversaw the controversial campaign, which was created by advertising agency TBWA on behalf of the British government.

In the series, Lydia West's character, Jill, begins volunteering at an LGBT helpline amid her growing concerns over the HIV and AIDS crisis. The helpline depicted in the Channel 4 drama is based on the real-life Switchboard LGBT+ helpline, the second-oldest LGBT+ telephone helpline in the UK. As BBC reports, Switchboard first began operating in March 1974 and began as a small, volunteer-led organisation with the aim of providing support to London's gay community.

Throughout the 1980s, Switchboard became a leading source of information during the HIV and AIDS epidemic, offering crucial advice on how to avoid transmission of the virus, for example. During the crisis, government public health leaflets featuring Switchboard's contact information were sent to every household in the UK, prompting a significant rise in phone calls. In the years following, Switchboard volunteers went on to set up leading HIV charities such as Terrence Higgins Trust (THT) and National AIDS Manual (NAM).

Almost 40 years since the height of the HIV and AIDS crisis, Switchboard's current co-chair, Tash Walker, says the helpline is still very much needed today. Speaking to the BBC, Walker said: "the fact that we're still here 45 years later, we're getting around 15,000 calls a year... it speaks for itself."

Nathaniel Curtis's character, Ash, lands a job in a school, where he's instructed by his boss to remove any literature containing the promotion of homosexuality from the school's library, citing "Clause 28". The clause, also known as Section 28 of the Local Government Act, was a law first enacted in May 1988, which stated that a local authority "shall not intentionally promote homosexuality or publish material with the intention of promoting homosexuality" or "promote the teaching in any maintained school of the acceptability of homosexuality as a pretended family relationship."

Per the BBC, Conservative Prime Minister Margaret Thatcher voiced her support of Section 28. Speaking at the time, Thatcher said: "children who need to be taught to respect traditional moral values are being taught that they have an inalienable right to be gay. All of those children are being cheated of a sound start in life."

Following years of backlash and protests from LGBT+ campaigners, the law was eventually repealed in 2003.

Throughout It's a Sin, several characters are hospitalised. Some are locked into wards and practically abandoned. At other times, nurses and doctors are shown draped in heavy PPE. Cleaning and safety precautions are extreme: scrubbing beds down with a fine-tooth comb. Undertakers refused to handle the bodies, crematoriums turn people away and funerals are scheduled for the dead of night. Though deeply upsetting, these on-screen depiction aligns closely with the early days of the 1980s epidemic, when medical experts around the world were unsure of the disease and who was at risk.

As iNews reports, many nurses and doctors at the time would often refuse to treat patients suffering from HIV or AIDS or perform post-mortem examinations on a person who had died from an AIDS-related illness, despite reassurances that the virus could not spread through touch. In 1985, concerns held by some medial workers became increasingly detrimental to the fight against HIV and AIDS, prompting the Royal College of Nursing to release a statement that warned nurses who refused to treat people with HIV or AIDS could lose their job.

In a particularly distressing scene, Colin is practically imprisoned in hospital, told he cannot leave and declared a "public health enemy." This storyline is one Davies borrowed from real life, too.

In 1985, a man with AIDS was actually imprisoned within a British hospital, the Monsall in Crumpsall," explained Davies to the Guardian. "At the request of the man’s consultant, a court order was granted to lock the door and refuse him the right to leave. The case became one of the first activist uprisings. Gay groups organised and campaigned. Ten days later, the order was withdrawn. The fightback was just beginning."

The sheer level of misinformation

"As the decade unfolded and HIV proliferated, we had to cope with terror and anger but also, more insidiously, sheer disbelief," wrote Davies for the Guardian. "The hysteria quickly caught fire, because fake news, false facts and conspiracy theories weren’t invented in 2020.

"It’s hard to look back and reconstruct how information was spread in those early days, ’81, ’82, before the tabloids got hold of the story. Rumours. Mutterings. Whispers from America. Chat in the dark corners of pubs. A few brave activists photocopying what little information they had; the photocopied sheets you ignore when out clubbing."

More like this
'Consent' Is Not Just One Person’s Story, But Hundreds
By Shahed Ezaydi
Wait, Is 'Happy Valley' Not Actually Over?
By Darshita Goyal
'Happy Valley's Ending Was *Almost* Entirely Different
By El Hunt
6 'Happy Valley' Easter Eggs You May Have Missed
By Sophie McEvoy
Get The Very Best Of Bustle/UK
Sign up for Bustle UK's twice-weekly newsletter, featuring the latest must-watch TV, moving personal stories, and expert advice on the hottest viral buys.