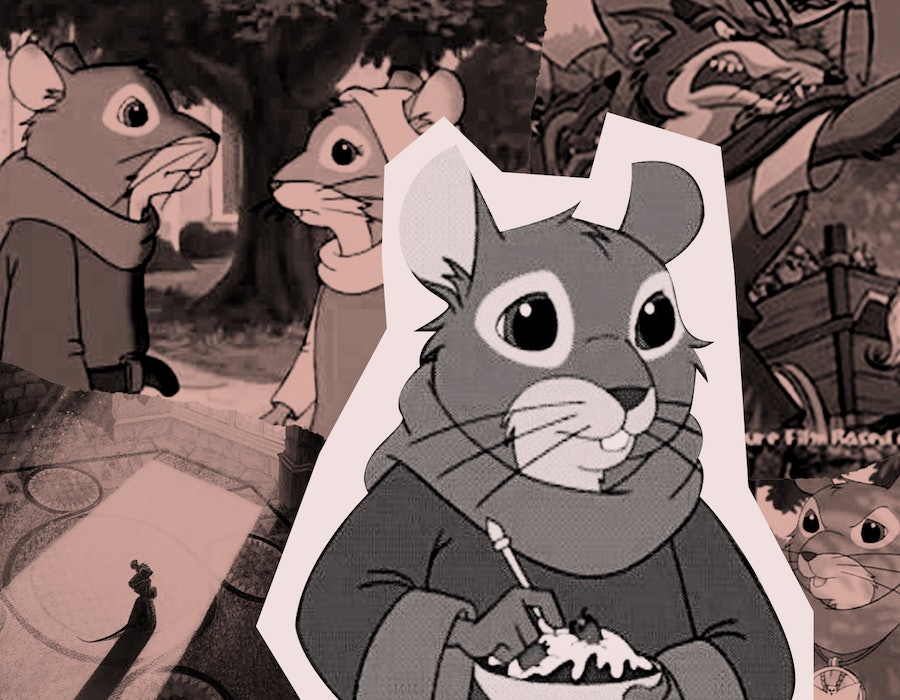 Last week, Netflix issued a massive announcement that sent shockwaves through the internet of older millennials and younger Gen-Xers: It is making a Redwall movie and a Redwall television series. Finally, for the first time since a pretty flatly animated adaptation more than 20 years ago, the world of medieval mouse warrior-priests and delicious-sounding herb-and-nut-based feasts will be put to screen.

Even before the Netflix announcement, I was experiencing a Redwall rediscovery. I recently moved in with my boyfriend, which led me to the incredible discovery that in a wave of nostalgia, this 36-year-old adult man had purchased a set of every single book in the Redwall series. Until then, I had all but forgotten about Redwall. They were books I would sneak out of my older brother’s room, mostly because I liked reading the various descriptions of fall squash soups. But upon seeing a paperback copy, I flipped it open and the memories came flooding back — like smelling the perfume of an elementary school teacher or hearing a song that you had heard on the radio while you were in middle school. Upon merely seeing the words “Cluny the Scourge,” I was transported back to the days of Scholastic book fairs and paper cartons of milk with lunch.

But as an adult, re-reading Redwall with a critical eye led to the revelation of a serious textual discrepancy, one that I think we need to get to the bottom of before Netflix releases what will no doubt become the definitive adaptation: How big is Redwall Abbey?

It’s a deceptively complex question, and one in which the author, Brian Jacques, is incredibly unhelpful.

If you’re unfamiliar with the book series, Redwall Abbey is a stone structure in a mythological English meadow where a number of noble and kind-hearted woodland creatures live and fight off evil. It’s sort of like a proto-Hogwarts, with all the warm homeliness of a bucolic British countryside castle. Humans never appear in the Redwall series, and with the exception of a cart and horse in the first Redwall book, neither do any human structures or technology. And yet there are a number of clues in the text that indicate that the Abbey itself is human-sized or at least far larger than might have been constructed by mice and for the sole purpose of mice.

It’s a deceptively complex question, and one in which the author, Brian Jacques, is incredibly unhelpful. In an interview with Scholastic, one brave soul dared to present the question to the author explicitly. Jacques' reply? “It is as big or as small as you want it to be in your imagination!” That answer is, in short, garbage.

When I posed the question to Twitter a few weeks back, the answers came back starkly divided into three camps, each of which I shall address in turn.

HYPOTHESIS 1: The Abbey is mouse-sized.

This is perhaps the most intuitive interpretation of the text. We see mice and other woodland creatures living in Redwall Abbey, using the kitchens, and walking up and down stairs, etc. —with no mention of modifications made to turn a human-sized infrastructure into one appropriate for mice.

And yet there are specific instances in the first Redwall book that indicate that the Abbey is in fact human-sized. In order to get over the wall to the Abbey, Cluny and his gang of rats and ferrets must climb up a giant oak tree, and even then from the tallest branches, they have to extend a plank out and up. If the Abbey was built just for mice, its outer wall wouldn’t be giant-oak-tree-sized. Later in the book, we also see Matthias climb to the top of the Abbey, and it’s depicted as a journey — with ropes and break-taking, like he’s Free Solo-ing up the side of a mountain. And then an entire society of sparrows live up there, which would never work if this was a tiny mouse church.

HYPOTHESIS 2: The Abbey is human-sized.

Is possible that Redwall Abbey is an abandoned human structure, but one in which mice built a parallel living situation à la The Borrowers? Martin the Warrior having “built” the Abbey in its founding myth could be understood to have built the adaptations that made it livable for mice and other creatures. This is the interpretation that I recall imagining when I was a child. Even though no human is mentioned in the Redwall universe (and Jacques notes clearly on his website, “No humans are ever in the stories, and I don't intend that they should ever be”), I sort of imagined that the mice were living alongside human monks and abbots and that the humans just had no idea that this entire mouse war was going on under their noses.

Additional evidence in favor of a human-sized Abbey exists in the fact that non-mice characters, like Constance the Badger, comfortably live and fit within Redwall. Badgers are much bigger than mice, and though in later books, Jacques ret-cons the size of creatures to all be more or less the same, in the first book, the badgers are notably larger. Constance is big enough that she pulls a cart with a bunch of mice on it like a woodland taxi cab.

HYPOTHESIS 3: The Abbey is human-sized, but the mice are also human-sized.

If we turn to Brian “Unhelpful Answers” Jacques’ section of Frequently Asked Questions on his website, he provides us only this taunting missive: “The creatures in my stories are as big or small as your imagination wants them to be.”

Brian Jacques and his website were absolutely no help to me in figuring this out. And even worse: One interview with him actually specifies that his family anglicized his last name, so it’s pronounced Brian JAKES. I left his website deeply troubled, with more questions than answers.

Given the later books’ inclination to balance out the size of the woodland creatures (in other words, making ferrets, badgers, mice, and foxes all more or less the same size), it’s tempting to imagine that maybe in this mythical world, the mice are giant. Just 6’2” mice going around, buying straight-leg jeans from The Gap for mice.

This hypothesis, tempting as it is, is ridiculous. Our first introduction to Cluny the Scourge — the villain of the piece — references him and his band of 500 rats riding on a hay cart pulled by a horse. There is no way that 500 human-sized rats could fit on a hay cart. And then we get the fish. The fish! Matthias fishing is one explicit reference to size: Brother Alf and Matthias catch and land a fully grown grayling, “nearly 2 pounds in weight, a tribute to Brother Alf’s angling skills combined with the youthful muscles of Matthias and their joint enthusiasm.” Two mice catching a fish weighing nearly 2 pounds is seen as an accomplishment. “Constance the badger had to be called” in order to bring the fish to the kitchen. Because the mice are small! They are mice!

I think we all can look forward to the thousands of angry fans furious and convinced that Netflix did it wrong.

So how big is Redwall Abbey, d*mmit?! Reading Redwall should not feel like reading The House of Leaves. Someone get Will Navidson to get a tape measure and a camera to get us the answers we deserve.

But here is the terrible truth: The reason there is no clear answer is because there actually is no answer. The dimensions of Redwall Abbey in the first book of the series are inconsistent, and only later does Brian Jacques figure out a consistent world-building mythology with regards to size, in which the mice seem to be about 3 feet tall or so, on par with the otters and badgers and the like. By that logic, we can retroactively understand Redwall Abbey to be big enough for a human to hypothetically fit into, if it was built by mice to be incredibly grand, like a Notre Dame or Westminster.

Good luck to the Netflix team in trying to figure this sh*t out. Can’t wait to see what you come up with, and I think we all can look forward to the thousands of angry fans convinced that Netflix did it wrong even though there’s literally no right way to do it.

More like this
The OG Power Rangers Are Returning For A Spandex-Clad Special
By El Hunt
'Abbott Elementary' Fans Probably Missed This 'Parent Trap' Easter Egg
By Sam Ramsden
'Brookside' Is Coming Back & Soap Opera Fans Are Going Wild
By Sam Ramsden
All The ’70s Easter Eggs You Missed In 'That ’90s Show'
By Grace Wehniainen
Get Even More From Bustle — Sign Up For The Newsletter
From hair trends to relationship advice, our daily newsletter has everything you need to sound like a person who’s on TikTok, even if you aren’t.