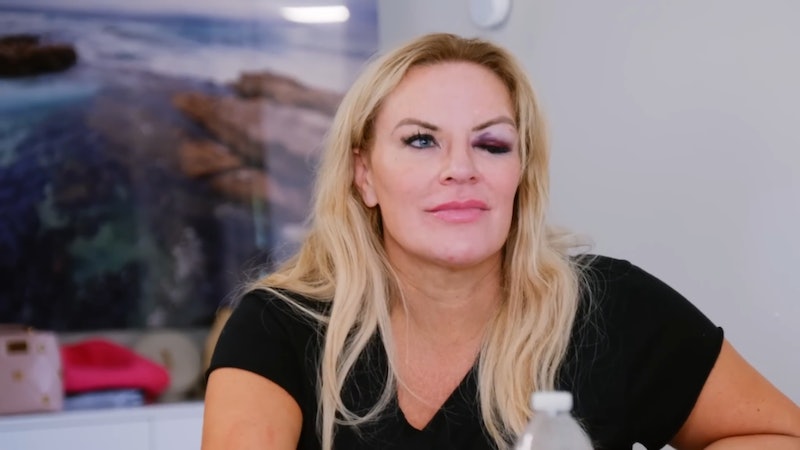 After a season of maddening teases, unresolved cliffhangers, and a whole lot of theories, part one of The Real Housewives of Salt Lake City reunion finally delivered some more information about how Heather Gay got a black eye. During the sit-down with host Andy Cohen, Heather at least partially came clean. “I blacked out,” she said of what happened the fateful night she stayed up partying in San Diego before waking up with a shiner. “I don’t know what happened.”

When Cohen and the rest of her RHOSLC cast mates asked why she withheld that information and instead joked around and suggested someone hit her, Heather broke down in tears. “For me, I have a lot of Mormon shame about drinking,” she said. “I woke up in a very very high stress situation with so much shame and humiliation. There’s no way to hide it, and for me I went to my thing which is just humor, just make it go away. And it didn’t go away. But I certainly do not want to implicate anyone here, anyone on production. It’s my own guilt and shame about blacking out and not being able to explain it.”

Cohen confirmed that the people who jiggled the door handle and attempted to get into Heather’s room at 4:50 a.m. on that fateful San Diego trip were Jen Shah, Meredith Marks, and Angie Katsanevas; the rest of the footage of them hanging out with Heather until the wee hours the morning aired on the show and did not provide any answers. “There is no additional footage,” Cohen said. “Otherwise it would’ve been shown.”

For her part, Heather admitted there is a lot missing from her recollection of the night, though things came back in bits and pieces. “I remember coming to my room, taking my wig off, and that’s it. And I woke up in my pajamas with a horrible black eye, and Jen said scratches on my back and scratches on my arm, which could have been anything,” she said. “I was humiliated.”

So what really happened? Below, the best theories — including one that a podcaster says he’s confirmed is true.

The Dec. 21 episodes seem to point in the direction of this theory. Why, after all, would a Housewife choose to protect someone who hurt them when they could call them out on television, getting justice and a potent storyline in the process? The only reason, amateur detective Whitney Rose suggests, would be to protect that person. And who needs protection more than one Jen Shah, whose legal case was — and still is — working its way through the court system? At the time of filming this episode, Jen had not yet changed her plea to guilty to conspiracy to commit wire fraud in connection with telemarketing and was asserting her innocence in the case. Wouldn’t a physical fight on a television show cast doubt on that claim?

“I am solidly on the theory that it was Jen, but Heather won't ever f*cking tell us because she doesn't wanna mess up her bail conditions,” Reddit user hisosih wrote, to which user artisticflame replied, “She’s telling us indirectly by continuing to draw attention to it.”

Heather’s own statements during part one of the RHOSLC reunion leave this theory still in play as a possibility. Asked directly by Cohen if she thinks Jen punched her in the eye, Heather repeated that she only knows that she blacked out. When Cohen pressed her on if she would have protected Jen had she actually remembered that Jen hit her, Heather didn’t shut it down. “If I knew Jen did that, I would cover it up,” she said. “But that was not my intention. I was blacked out.”

Andy Cohen has previously stated that Jen Shah’s decision to plead guilty to conspiracy to commit wire fraud spelled the end for her time on RHOSLC, and fans suggested that was the reason she did not attend the Housewives extravaganza BravoCon in October. Shah has said that she was barred from the Season 3 reunion in September, only for Bravo producers to extend an invite to her in November, which she then declined out of respect for her ongoing legal case.

But Bravo fans are putting on their tinfoil hats to suggest a physical altercation could be the real reason — or at least, another reason — Shah was barred from BravoCon and the RHOSLC Season 3 reunion.

It Was An Accident & Heather (And Bravo) Are Milking It

The RHOSLC After Show offered some more interesting clues as to what happened. In an interview with Whitney Rose and friends Danna Bui-Negrete and Angie Katsanevas, Whitney suggests that perhaps Heather’s injury wasn’t the result of a fight. “I’ve seen black eyes. That was not a black eye of roughhousing,” she says. “That’s like a shiner. This was like her whole eye was black. It was like blunt force.”

Danna also notes that the last three people awake that night were Heather, Jen, and Meredith — notably, Heather and the two women she called first the next morning in a panic. In a separate After Show interview, Lisa Barlow weighs in. “I’m like, OK, they were pretty wasted. Heather drinks all day pretty much every single day, so I’m like, maybe she tripped and fell and is humiliated about it,” she says. “The fact that Heather’s being so coy about this, and not flat out saying what happened to her — we would all stop talking about this,” Lisa continues in another After Show clip. “I’m like, Heather, do you need more attention? Is this a diversion from like, last night’s conversation?”

Reddit user bellbert, meanwhile, supports the accident theory. “I’m probably reading way too much into it but it seemed like they zoomed in on that British flag table (with pointy corners) at the beginning of the ‘eye reveal’ scene. Her wig was on the floor right next to the table and as Jen hands her the wig, Heather says ‘omg where did you find that?’ So it looked to me like she fell, hit her eye on the table, and her wig fell to the floor.”

Reddit user Ok-Assumption-419 has a similar theory that it was an accident, and even provides specific timestamps from the Dec. 21 episode to suggest Heather’s bruise was already forming before that supposedly fateful drunken night.

“I believe Heather had this bruise as early as Night 1. When Heather shows up for the dinner, the area around her left eye looks purple,” they write, going on to suggest that perhaps Heather was injured during the bubble ball soccer game on day 2. “Other than when the ladies wake up on day 2, Heather is seen wearing sunglasses all day, even when she is in the bubble ball. Danna bumps up hard against her, and Heather plops down, looking stunned. In my opinion, the handles of the ball hit against Heather's sunglasses and aggravated an already existing bruise, and the pain shocked her.”

At the reunion, Angie Katsanevas suggested that she still believes Jen was involved in Heather’s black eye somehow. “Jen was very off and not present the next day,” she said, reminding viewers of the first scene the next morning when Heather tells Jen they need a “cover story” for her injury.

A less charitable reading from Bravo fans on Twitter is that Heather is staying quiet to build intrigue and give herself a storyline this season.

In the Jan. 11 episode, Angie Katsanevas suggests another theory involving Jen. “Everybody is saying that perhaps her and Heather were in their room, having a sexual relationship and then romping, bumping, and giving each other a black eye after, because maybe someone wasn’t very good in bed,” she says to an amused-looking Whitney Rose and Lisa Barlow. While the two ended the night running around with their tops off, this theory is quickly discarded by the rest of the group.

At part one of the reunion, it’s brought up again. “I was talking to some people," Angie explained, "and they said, ‘Have you ever heard of any sexual relations between Heather and Jen?’” We’ll have to wait for Heather’s response in part two to see if she, too, discards this theory.

It Was... A Botox Side Effect?

Bravo Historian Samantha Bush had another theory that would suggest Heather really is protecting herself by staying mum: it was Botox! Though bruising is a common side effect of Botox according to dermatologists, it certainly wouldn’t look great for the owner of Beauty Lab + Laser to experience such dramatic side effects on-camera from alleged procedures done by her own med spa.

“My theory: no one punched Heather, she got bruised from bad Botox and wants to cover for Beauty Lab and Laser. And those aren’t scratches they are lipstick marks,” she wrote in a since-deleted tweet. Bush also pointed out that it appears Heather’s swelling had started earlier that day, lending more credence to her theory:

Other Twitter users started doing their own digging and amateur medical analyzing, comparing Heather’s swelling eyelid to the typical appearance of a black eye.

For context, dermatologists often discourage patients from drinking alcohol after Botox, as it can increase blood flow to the injection site and lead to more bruising.

Though we don’t know if Heather had recently gotten Botox — this is all speculation, to be clear — it’s not out of the realm of possibility: she’s openly discussed her love of Botox and other injectables like filler, and says she gets them all for free as the owner of Beauty Lab + Laser. Add that to the fact that she did have quite the alcohol-soaked night before she woke up with a severely swollen eye, and perhaps this theory isn’t quite as wild as it sounds — though, to be sure, Heather has yet to specifically acknowledge this theory.

This theory brought forth by podcaster Zack Peter in a live video that was captured and posted to TikTok by @socialitegossip suggests a very specific inanimate object is the culprit. “I’ve been able to confirm this with three different people,” Peter begins, before adding that one of his sources is allegedly a Salt Lake City Housewife herself. “Nobody hit her, and it’s not bad Botox. She banged her eye... I guess there was a faucet in Heather Gay’s bathroom, and she walked into the bathroom when she was drunk and hit it.”

That would explain why there’s no footage of the incident, and also why Bravo kept teasing Heather answering the door in a towel at 4:50 a.m. — perhaps she was washing her face in the bathroom, hit it on the sink, and called Jen for help?

Peter adds in the video that his sources allege that Heather actually did reveal the faucet was the culprit on-camera, but that Bravo cut it from the show to create intrigue.

As of the reunion, this theory — at least the part about the faucet, not that she admitted it on-camera — is still in play. In fact, Heather’s admission that she blacked out, coupled with Andy’s acknowledgement that there is no other footage from the night in question, suggests a bathroom accident could actually be the culprit.

This article was originally published on Dec. 22, 2022