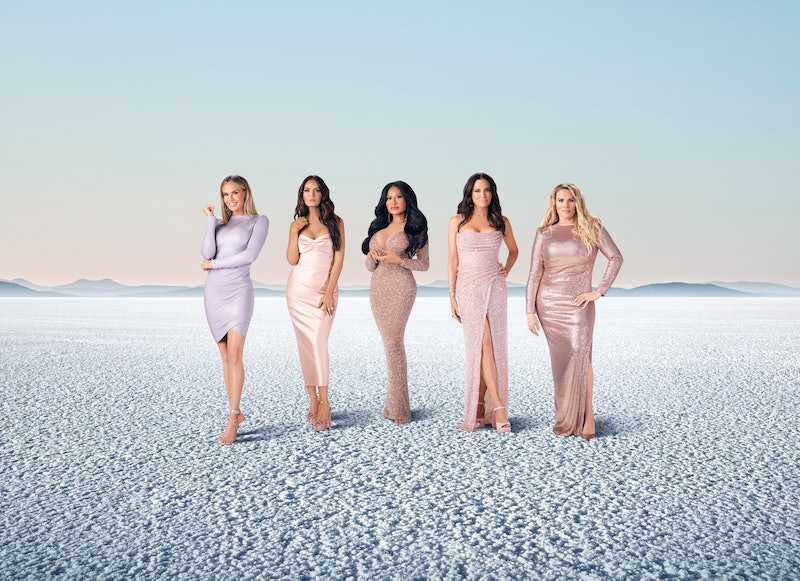 The Real Housewives of Salt Lake City isn’t slowing down without Jen Shah. The hit series aired its Season 3 finale on Jan. 11, and a two-part reunion premiered two weeks later. With Shah due to report to prison on Feb. 17, fans are wondering if the show is now in jeopardy. Luckily, while Shah might be going away for the next few years, the ladies of Salt Lake are staying put on Bravo.

While Bravo usually doesn’t announce their series’ renewals until a new season has wrapped filming, Bravo honcho Andy Cohen has already confirmed that RHOSLC Season 4 is already in the works, meaning fans can expect to see Utah’s snowy mountains back on their screens sooner than they think. And hopefully, the mystery behind Heather Gay’s black eye will be solved by then.

The third season primarily focused on the five remaining OG Housewives, with Lisa Barlow, Heather Gay, Meredith Marks, Whitney Rose, and Shah as the only full-time cast members. While a cast shake-up is guaranteed in light of Shah’s prison sentence, as all Bravo fans know, no Housewife is ever considered safe before a new season has been cast.

Here’s everything you need to know about RHOSLC Season 4, including Shah’s fate as a Bravo star.

While the Season 4 cast has not been confirmed by Bravo, it looks like fans will see both new and familiar faces. According to Page Six, OG Housewife Mary Cosby will be returning as a “Friend of” the Housewives after leaving the show following her absence at the Season 2 reunion. “Mary wanted to come back,” an insider told the outlet. Page Six also reported that Barlow, Gay, Marks, and Rose will all return for another season as full-time Housewives. However, the status of Season 3’s Friends, Angie Katsenevas, Angie Harrington, and Danna Bui-Negrete, are currently unknown.

Some new blood will also be joining the OG foursome. Cohen has confirmed that casting is already underway for the new season, and he feels pretty confident already. “We have excellent casting for next season,” he teased on his SiriusXM radio show Radio Andy. “I'm feeling good.” Rose teased one of the new Housewives on her Wild Rose podcast, calling her a “dynamic person who is going to ruffle some feathers” without revealing her identity.

Will Jen Shah Be On RHOSLC Season 4?

On Jan. 6, Shah was sentenced to 78 months in prison after pleading guilty to charges of wire fraud in July 2022. Interestingly, during her sentencing, Shah’s lawyer claimed that she was still employed by Bravo, despite Cohen’s claim in October that the network essentially cut off communication with her after the guilty plea.

Reacting to Shah’s sentencing a few days later on his SiriusXM radio show, Cohen set the record straight concerning her future on RHOSLC. “I'm like, ‘Do you understand that this woman is being sentenced to jail on January 6th?’” he explained. “They're not gonna give her no time. So you tell me, is she on the show? Like, what do you want me to say about whether she's on the show? She's going to serve her time. I don't understand what people want me to say…. It seems like the judge figured it out for us, didn't he?”

Cohen did leave the door open for a sit-down interview with Shah. “I'm hoping to go talk to Jen this weekend,” he said “I'm hopeful that I can do that sit down with her in front of some cameras and deliver that to you.” However, Shah backed out of the interview as plans were being made, saying Bravo wouldn’t agree to her contractual requests.

While fans should not expect to see Shah as a Housewife again, filming for Season 4 reportedly begins on Feb. 13, just four days before Shah is scheduled to report to prison. This means she could make a brief appearance on the season premiere, or at the very least, her former co-stars may react to her departure in real time. There is also a possibility that her RHOSLC castmates could check in with her over the phone or perhaps even travel to see Shah in prison — or as Whitney mistakenly said during Season 3, make a “conjugal visit.”

A premiere date for RHOSLC Season 4 has yet to be announced, but previous seasons’ timelines could help set your expectations. Seasons 2 and 3 premiered in September, and with filming reportedly set to begin in February, it’s certainly possible that the fourth season will follow suit in September 2023. At the very least, the Salt Lake City Housewives should be back on your screen again before the end of the year, making it the top priority of your future winter watchlist.

Given how production has yet to begin on the new season, it will be a long time until fans are able to watch a trailer for RHOSLC Season 4.

This article will be updated as more details about RHOSLC Season 4 becomes available.

More like this
Everything To Know About 'The Real Housewives Ultimate Girls Trip' Season 4
By Jake Viswanath
'RHOSLC’s Heather & Whitney Are Still On A “Friendship Break” After Season 3 Reunion
By Jake Viswanath
RHOP’s Robyn Dixon Explained Why Juan Paid For Another Woman's Hotel Room
By Brad Witter
Andy Cohen Apologized To Larsa Pippen After A 'RHOM' Season 5 Reunion Dust-Up
By Brad Witter
Get Even More From Bustle — Sign Up For The Newsletter
From hair trends to relationship advice, our daily newsletter has everything you need to sound like a person who’s on TikTok, even if you aren’t.