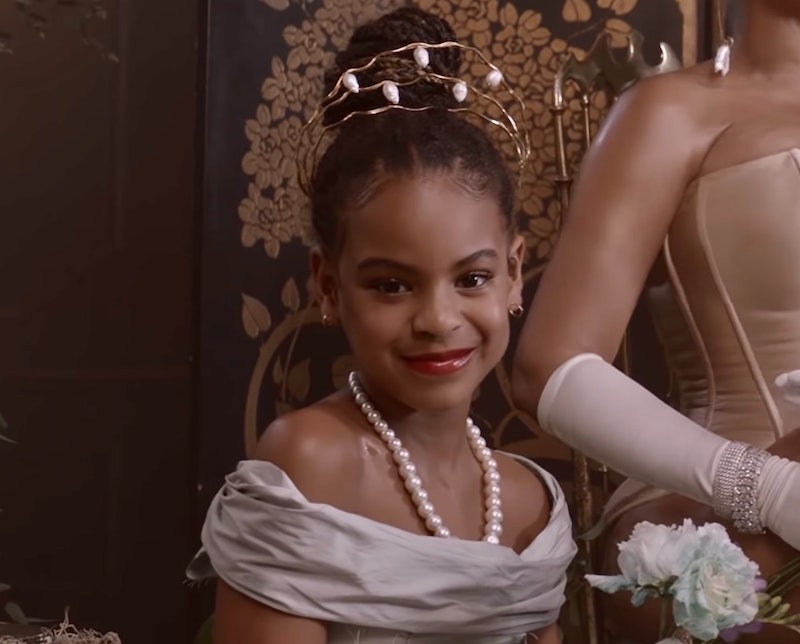 She's already attended the awards ceremony multiple times with parents Beyoncé and Jay-Z, but this year, Blue Ivy Carter is a Grammy nominee herself. When her mom's "Brown Skin Girl" music video received a 2021 nod in November, the 8-year-old was not listed as a contributor despite being featured. Then, on Friday, Dec. 11, the Recording Academy updated its website and it now includes her in the honor, the Associate Press reported. (Nigerian musician WizKid was also added as a nominee, although fellow collaborator SAINt JHN, who did not appear in the music video, was not.)

On the track off of Beyoncé's 2019 The Lion King: The Gift companion album, Blue Ivy can be heard singing the line: "Brown skin girl, skin just like pearls, best thing in the world, I'd never change it for anybody else." The talented youngster also appeared alongside her mother and grandmother Tina Lawson, among several other special guests, in the "Brown Skin Girl" music video; multiple sweet family moments are peppered in throughout.

This is hardly the first recognition Blue Ivy has received for the song. In February, she won a 2020 NAACP Image award in the outstanding duo, group, or collaboration category. Several months earlier, she also took home a BET Soul Train Award for best songwriting.

Blue Ivy's other recent work includes narrating Matthew A. Cherry's Hair Love audiobook, which is based on the Academy Award-winning animated short film version. It came out this year, so — who knows? — yet another Grammy nom could even be on the horizon. She's one of the youngest nominees ever, and she's just getting started.

In her December British Vogue cover story, Beyoncé, also mom to 3-year-old twins Sir and Rumi, sang her eldest daughter's praises, explaining how they celebrate each other's accomplishments. "When I tell her I'm proud of her, she tells me that she's proud of me and that I'm doing a good job. It's teeeeeew much sweetness," the 24-time Grammy winner gushed. "She melts my heart. I believe the best way to teach [my kids] is to be the example."

And Blue seems to already be following in her mom's footsteps.

More like this
Beyoncé’s Special Tribute To Sister Solange Was Both Touching & Hilarious
By Stephanie Topacio Long
Everything To Know About Taylor Swift’s 10th Studio Album, 'Midnights'
By Grace Wehniainen and Jake Viswanath
How Ghosts Inspired Kesha’s New Music
By Jake Viswanath
Lizzo Twerks While Playing James Madison's 200-Year-Old Crystal Flute Onstage
By Radhika Menon
Get Even More From Bustle — Sign Up For The Newsletter