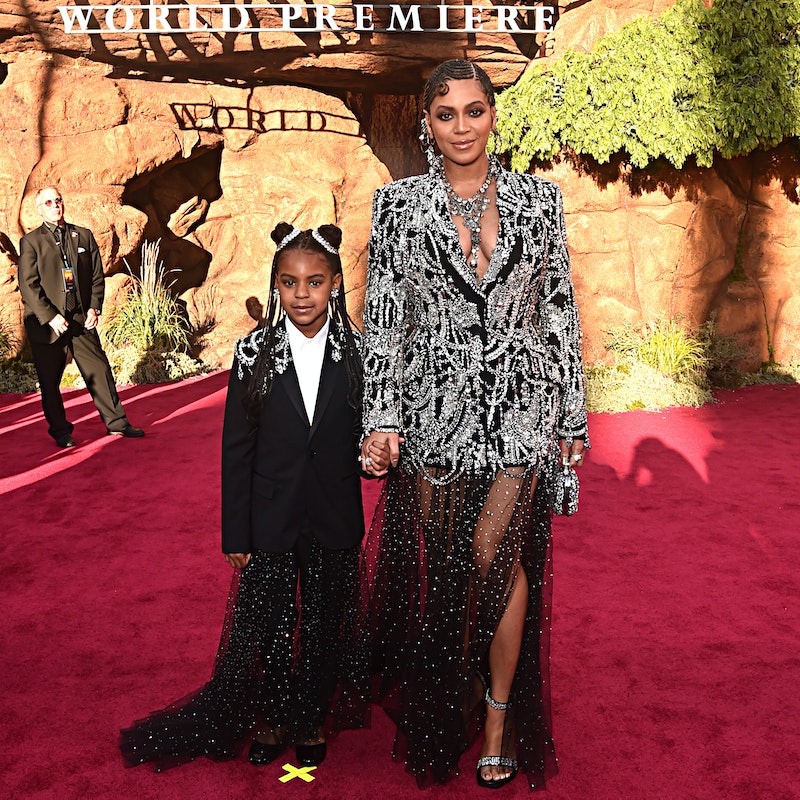 Beyoncé's eldest daughter may be little, but she's also fiercely talented, and now Blue Ivy has a Soul Train Award for songwriting to prove it. On Sunday, Nov. 17, the 7-year-old took home the award for Best Songwriting for "Brown Skin Girl." She shares the honor with her mom, Beyoncé, as well as their fellow co-writers Carlos St. John, Adio Marchant, Shawn Carter, Stacy Barthe, Anathi Mnyango, Michael Uzowuru, Ayodeji Balogun, and Richard Isong. The song appeared on Queen Bey's The Lion King: The Gift album, and it also includes Blue Ivy's vocals at the beginning and the end of the award-winning single.

In the song's intro, Blue Ivy sings, "Brown skin girl, skin just like pearls, best thing in the world, I’d never change it for anybody else." The young singer is then joined by her mom, WizKid, and SAINt JHN, who all helped make the empowering anthem for black and brown women everywhere. Since its release, "Brown Skin Girl" has become a viral sensation, inspiring #BrownSkinGirlChallenge and debuting at No. 76 on the Billboard Top 200 chart, as reported by E! News.

Amazingly, "Brown Skin Girl" is just part of the 7-year-old's blockbuster year. Earlier in 2019, she co-starred with Beyoncé in her "Spirit" music video, and fans got a chance to see Blue Ivy nail recording her portion of "Brown Skin Girl" in the ABC special Beyoncé Presents: Making the Gift. She also appeared in Beyoncé's Homecoming documentary on Netflix, showing off her moves.

Queen Bey has been clear that she's raising her children not to accept limits, and her eldest is already turning that advice into an iconic career. When her ABC documentary aired in Sept., Beyoncé shared that "Brown Skin Girl" was about showing young women of color that the deserve to feel confident and beautiful. "To know that my daughter can have the same opportunities and feel confident and feel like she doesn’t have to take her braids down, she can comb her Afro out, she can glisten in her brown skin — that's why I make music," The Lion King star said in the doc.

"Brown Skin Girl" has touched the hearts of so many fans already, and based on the reaction on social media, Blue Ivy's songwriting win is just further validation of the song's message. Twitter user @DustinWill29 wrote, "Blue Ivy out here winning awards is just a regular day in the Carter household, she's an award-winning, hot-100 charting, hitmaking freestyle rapper, songwriter, vocalist, and a choreographer only at the age of 7.. wheeew A LEGEND A ICON QUEEN." Meanwhile @Gisellegend tweeted simply, "Also shout out to Blue Ivy Carter as she was credited as a Songwriter. Congratulations Queen Blue Blue."

At just 7 years old, Blue Ivy is already an icon in her own right, and her Soul Train Songwriting Award is sure to be just the first of many accolades to come.