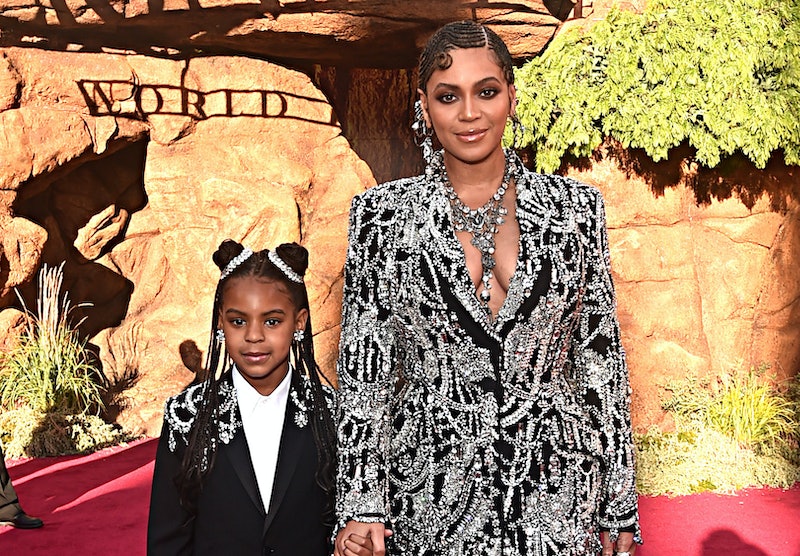 Beyoncé's new The Lion King companion album, The Gift, is full of incredible collaborations. But the most exciting one for Bey fans just might be Beyoncé's new song with Blue Ivy on The Gift. "Brown Skin Girl," also featuring WizKid and SAINt JHN, is a celebration of the beauty of black and brown women and girls. Blue Ivy starts and ends the inspiring track — and even received a writing credit for the song, per Genius — which led the internet to praise both the beautiful message behind "Brown Skin Girl" and Blue Ivy Carter's talents.

The Lion King: The Gift has a total of 27 tracks thanks to a mix of dialogue from the rebooted film and new Beyoncé-curated songs. The album features artists like her Lion King costar Donald Glover (as Childish Gambino), Pharrell Williams, Kendrick Lamar, Major Lazer, Jessie Reyez, and her husband JAY Z. But as Beyoncé's intention behind The Gift was to be "a love letter to Africa," she also made sure to work with African artists like Yemi Alade, Burna Boy, Salatiel, Tiwa Savage, Shatta Wale, and WizKid.

WizKid is one of the featured artists on "Brown Skin Girl," alongside Blue Ivy and SAINt JHN, who open the song with the chorus: "Brown skin girl/Your skin just like pearls/The best thing in the world/Never trade you for anybody else." And the lyrics only get more moving from there.

When Beyoncé joins in on the song, she shouts out to some other "brown skin girls" — Naomi Campbell, Lupita Nyong'o, and her old Destiny's Child bandmate Kelly Rowland. Beyoncé's verse uses these women to highlight the beauty of brown skin ("Melanin too dark to throw her shade," she sings) and encourages Blue Ivy to love herself.

"Oh, have you looked in the mirror lately?/Wish you could trade eyes with me/There's complexities in complexion/But your skin, it glow like diamonds," Beyoncé continues, seemingly addressing Blue Ivy directly. "I love everything about you, from your nappy curls/To every single curve, your body natural/Same skin that was broken be the same skin takin' over." She also makes sure to tell her oldest daughter that she's beautiful.

There's so much to love about the song, but the inclusion of Blue Ivy may be the highlight. The 7-year-old daughter of Beyoncé and Jay-Z, who already popped up in her mom's "Spirit" music video, has been given the agency to showcase her vocal and writing abilities on "Brown Skin Girls." So clearly these parents are practicing what they preach (sing?) by letting Blue Ivy show her value at such a young age. And fans can't get enough of it, predicting that Blue Ivy could perhaps even one day eclipse her mom's star power (if she hasn't already in your eyes).

"Brown Skin Girl" ends just as it should — with Blue Ivy singing about how brown skin girls are the best in the world. So along with helping promote African music to the masses, one of the other greatest gifts Beyoncé — and Blue Ivy — provide on The Lion King: The Gift is that of encouraging brown skin girls to embrace who they naturally are and know their worth.

More like this
Beyoncé & Blue Ivy Performed A "Brown Skin Girl" Duet At Her Private Dubai Concert
By Brad Witter
Austin Butler Recalls Lisa Marie Presley Showing Him Elvis’ Bedroom
By Jake Viswanath
You’ll Definitely Recognise Isadóra Bjarkardóttir Barney’s Mum
By Maxine Harrison
Lisa Marie Presley's Secret Granddaughter Was Revealed At Her Funeral Out Of Nowhere
By Jake Viswanath
Get Even More From Bustle — Sign Up For The Newsletter
From hair trends to relationship advice, our daily newsletter has everything you need to sound like a person who’s on TikTok, even if you aren’t.