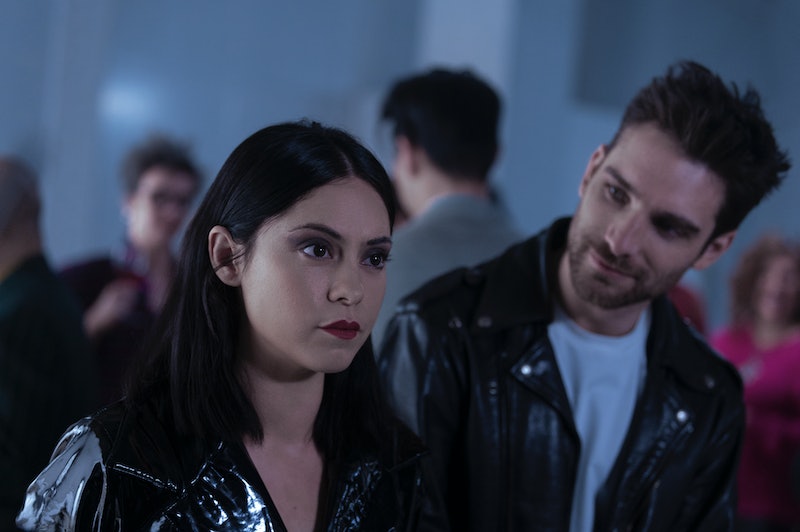 Hell hath no fury like a woman scorned. In Netflix’s Brand New Cherry Flavor, Rosa Salazar plays Lisa Nova, a budding 1990s horror director who gets her movie stolen by a sleazy producer named Lou (Eric Lange). Desperate for revenge, Lisa makes a deal with Boro (Catherine Keener), a witch doctor who promises, “For you? I could hurt someone.”

Boro has Lisa undergo a gross ritual that binds Lisa to Lou so that Boro can “set his life on fire.” What ensues is a surreal tale that includes zombies, otherworldly monsters, and an unfortunate number of cats vomited up by Lisa. The show certainly plays with a number of genre tropes, but whether or not Brand New Cherry Flavor is scary really depends on your tolerance for horror.

The series is based a 1996 novel of the same name by Todd Grimson and is created by Lenore Zion and Nick Antosca. Antosca has written for horror shows like The Act and Hannibal, while both Zion and Antosca worked together on the Syfy’s creepypasta-inspired show Channel Zero. Similar to Hannibal and Channel Zero, Brand New Cherry Flavor is full of bizarre imagery filmed in creative ways. As Lisa’s curse ramps up, she begins to dream of a woman whose face looks like it’s been scooped away. She watches cats feast on a coyote, wonders why her plants have begun growing down through the floor, and is stalked by a jittering, otherworldly entity. When a door spontaneously appears on her bedroom floor, she finds a ladder leading down to a dark void. And this is all before we get into Boro, who walks around with a zombie entourage and drinks the blood of kittens.

It’s all very strange — and likely meant to echo Lisa’s own creative and horror film sensibilities — but is it scary? Honestly, not really, unless you’re very inexperienced with watching horror. Many of these scenes, particularly as Lisa is first undergoing the ritual, are filmed like a hallucinatory fever dream, which some people may find unsettling. Antosca and Zion make use of a lot of flashing lights, tilted hallways, and blurring around the edges of the frame. But much of the horror elements are such a mixed bag that you may find yourself feeling more distracted than anything. It’s certainly less scary than shows like Haunting of Hill House and American Horror Story, which is helped by the fact that Brand New Cherry Flavor is also comedic at times.

What makes the show most unnerving are the more realistic moments of sexism that Lisa faces in the male-dominated film industry. Lou contacts Lisa out of the blue after being impressed by her short film, but her excitement at getting to direct her own project withers soon after meeting him. He tells her that she’s nothing special and tries to come on to her twice. When she rebuffs him, he laughs in her face and leaves her to walk home alone at night. By the next day, Lou has cut her out of the film — the only thing she says she cares about — and brought on Jules Brandenberg, a young white male director whose only former credits are music videos. When Lisa tries to confront Lou, he violently chokes her and slaps her. ““I’m not the bad guy,” he says. “Are you going to tell me you never used anybody for the sake of making something?”

After all of this, it’s easy to get invested in Lisa’s journey to take down Lou, Jules, and anyone else. The show may not keep you up at night, but it will likely give you a taste for revenge.