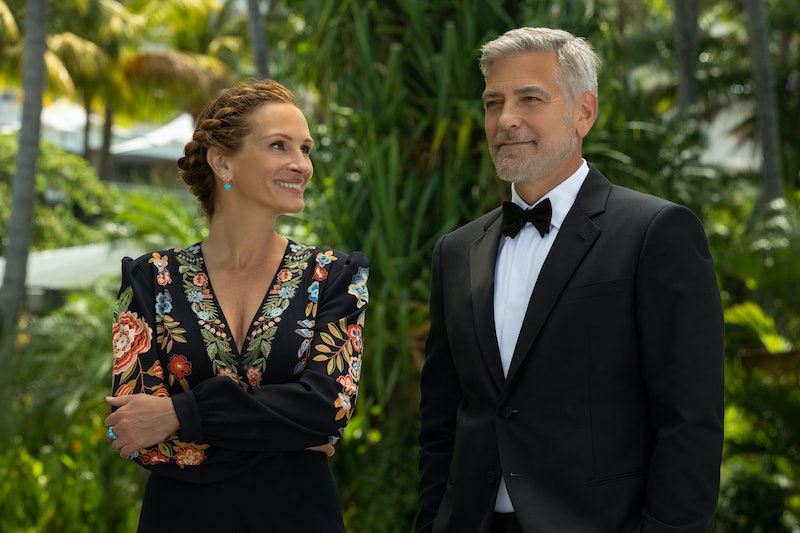 Julia Roberts and George Clooney are back, baby — and they’re trying to bring the big-budget rom-com back, too. For years, romantic comedies have largely had streaming-only or direct-to-video releases. But with recent films like Ticket to Paradise, which premieres exclusively in theaters, that trend seems to be changing.

Roberts and Clooney hope that the movie will offer audiences some much-needed fun. “George and I felt a lot of happy responsibility in wanting to make a comedy together, to give people a holiday from life after the world had gone through a really hard time,” Roberts told the New York Times. “It’s like when you’re walking down the sidewalk and it’s cold outside and you get to that nice patch of sun that touches your back and you go, ‘Oh, yeah. This is exactly what I needed to feel.’”

When will Ticket to Paradise be available to stream?

When Ticket to Paradise makes its streaming debut on Dec. 9, it’ll be on Peacock. Universal, the studio behind the film, brokered a deal with the streaming service in late 2021 that allows Universal movies to land on Peacock as soon as 45 days after their theatrical release. Though they’ve recently been taking longer to hit the service— Nope, for instance, landed on Peacock in mid-November, roughly four months after hitting theaters on July 22 — Ticket to Paradise’s debut on Peacock is a relatively fast turnaround.

In addition to streaming on Peacock, Ticket to Paradise is now available to rent on VoD platforms like Apple TV, Amazon Prime Video, Google Play, and Vudu.

What are critics saying about Ticket to Paradise?

Reviews have been mixed. The New York Times’ Amy Nicholson says it’s “a screwball adventure that forgets to pack the laughs,” while Variety’s Richard Kuipers declares, “Ticket may not contain that much sparkling and sophisticated wit — or indeed many big belly laughs — but delivers sufficient smiles and chuckles to register as an easily enjoyable if unmemorable diversion.” Not everyone was disappointed, though: IndieWire’s Ella Kemp praised the film, writing, “Ticket to Paradise, miraculously, has it all.”

More like this
'Knock At The Cabin' May Start Streaming Sooner Than You’d Think
By Jake Viswanath
Here’s Everything Coming To & Leaving Netflix In February
By Jake Viswanath
Stephen Graham & Steve McQueen Are Working On A Wartime Drama
By Darshita Goyal
Pamela Anderson’s Dating & Marriage History Could Be Its Own TV Series
By Jake Viswanath
Get Even More From Bustle — Sign Up For The Newsletter
From hair trends to relationship advice, our daily newsletter has everything you need to sound like a person who’s on TikTok, even if you aren’t.

This article was originally published on Oct. 22, 2022