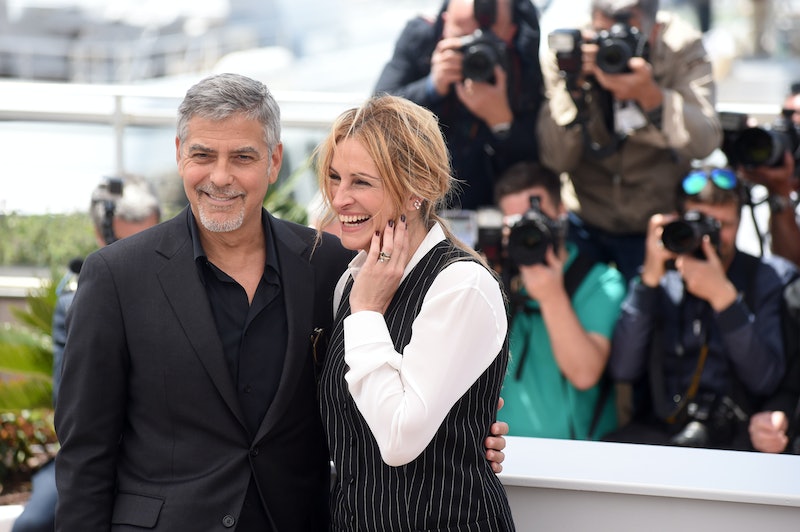 Julia Roberts and George Clooney are set to reunite on the silver screen in a big way this year, thanks to upcoming rom-com Ticket to Paradise. On the heels of J. Lo’s movie Marry Me, Ticket to Paradise refreshes the genre with familiar actors taking on a zany plot. The flick, directed by Ol Parker (of Mamma Mia! Here We Go Again fame) is the latest on-screen collab between Clooney and Roberts, a friendship that’s spanned over 20 years since they met on the set of Ocean’s Eleven. In that time, they’ve worked on 4 movies together, with Ticket to Paradise marking their fifth, forging one of Hollywood’s most iconic bonds.

In an interview with Variety at the Cannes Film Festival, Roberts took a moment to talk about the upcoming feature and joke about her experience filming with Clooney. Jokingly, she said the movie is “probably going to be terrible” because of how funny her and her co-star are, claiming “there’s too much potential for it to be great, it’ll just implode on it itself.” If Roberts’ words are anything to go by, Ticket to Paradise sounds like a treat.

So, what can we expect from the A-list acting duo in Ticket to Paradise? Everything from an in-flight argument to drunken beer pong in Bali. With the help of some of Hollywood’s favorite up-and-comers, the rom-com is shaping up to be a modern classic in the genre’s canon. Here’s everything you need to know about Ticket to Paradise, including the plot, cast, trailer, and release date.

The official synopsis of the film details Clooney and Roberts as “exes who find themselves on a shared mission to stop their lovestruck daughter from making the same mistake they once made.” Based on the trailer, the pair agree to “call a truce” with one another to successfully trick their daughter (played by Kaitlyn Dever) into dumping her fiancé, who she met recently in Bali, before she impulsively marries him. The ex-couple’s characters are concerned that their daughter is making this big decision too quickly, “just like her mother did,” Roberts says in the preview.

The trailer gives further hints to what we can expect from Ticket to Paradise, including playful competition and banter between Roberts and Clooney, Roberts’ character stealing her daughter’s wedding rings, and Clooney’s character being bit by a dolphin. A brief dance montage of the two closes the trailer out, promising viewers a goofy, enjoyable rom-com.

Clooney and Roberts are the star-appeal in this forthcoming flick, but the supporting cast is stacked as well. Dever (Dear Evan Hansen) plays the pair’s daughter while newcomer Maxime Bouttier plays alongside as Dever’s love interest. Billie Lourd (American Horror Story: Cult) and Lucas Bravo (Emily in Paris) round out the main cast.

The official trailer for the film was released on June 29, giving audiences a chance to see the island hijinks Clooney and Roberts get up to in the film. The dreamy, beachy backdrop of Ticket to Paradise is on full display in the almost 3-minute trailer, full of bright colors and clever one-liners from the cast.

The tension between the two in the first few seconds of the trailer is evident, as the exes realize they’re seated next to each other on a flight. “Excuse me, ma’am, I need to sit somewhere else,” Roberts’ character said, “we used to be married.” Clooney responds, “worst 19 years of my life” before quipping with Roberts: “We were only married for 5,” she says, “I’m counting the recovery,” he fires back.

Because the Universal film was set back a month while filming in Australia due to lockdown, the release date has been slightly modified. Ticket to Paradise is officially hitting theaters October 21, and we can’t wait to see Clooney and Roberts reunited on the big screen.

More like this
Gillian Anderson's New Netflix Drama Is *Nothing* Like 'Sex Education'
By Frances Stewart
'Knock At The Cabin' May Start Streaming Sooner Than You’d Think
By Jake Viswanath
Reese Witherspoon Confirms This Fan Favorite Will Return For 'Legally Blonde 3'
By Jake Viswanath
What Is Mary J. Blige’s Net Worth? The 9-Time Grammy Winner Is Doing “Just Fine”
By Hugh McIntyre
Get Even More From Bustle — Sign Up For The Newsletter
From hair trends to relationship advice, our daily newsletter has everything you need to sound like a person who’s on TikTok, even if you aren’t.