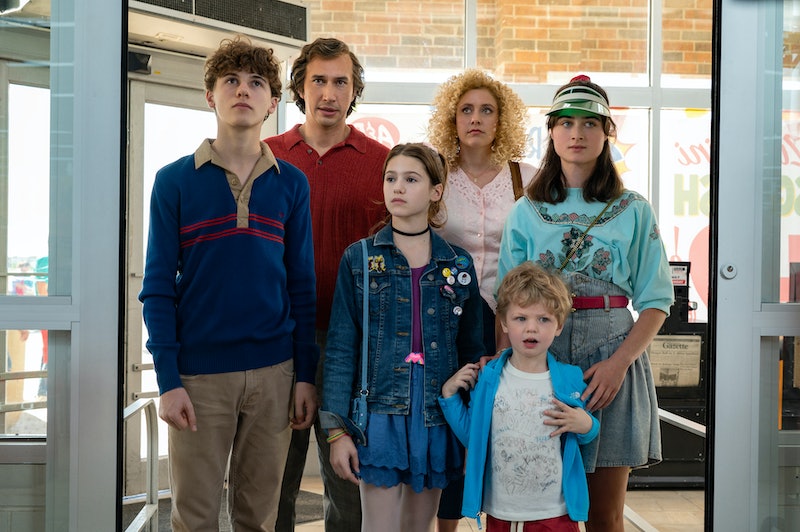 It’s been exactly a decade since Adam Driver and Greta Gerwig acted onscreen together in Frances Ha — and now, Netflix’s White Noise will bring them together once again. The film is based on Don DeLillo’s 1985 novel about a family dealing with a toxic event caused by a chemical spill. Per the official Netflix synopsis, the film “dramatizes a contemporary American family’s attempts to deal with the mundane conflicts of everyday life while grappling with the universal mysteries of love, death, and the possibility of happiness in an uncertain world.”

Gerwig and Driver play parents Babette and Jack Gladney, a Hitler studies professor. Gerwig’s real-life partner, Noah Baumbach, serves as writer and director. As the filmmaker tells Netflix, the idea to adapt White Noise for the screen came about during lockdown in 2020. “I wanted to make a movie that felt as crazy as the world appeared to me,” he said. “It’s a portrait of a country but it’s also a story of a family, of the chaos they try to hide, of the disasters that befall them, of the way they come together and survive.”

Don Cheadle and Jodie Turner-Smith are a few other names you’ll recognize in the highly anticipated film. Here’s everything you need to know about how to watch White Noise from home this holiday season.

How To Stream White Noise

You’ve likely already seen reviews for White Noise because the film has been released, but it’s not available for all audiences just yet. It’s been playing in select theaters since Nov. 25, in keeping with Netflix’s strategy of providing films with limited theatrical runs before they hit streaming. As Reed Hastings, the streamer’s co-CEO, recently told The Hollywood Reporter about Glass Onion, “It’s a promotional tactic like film festivals, and if it works well we will do more of it.” He added that the streamer is “not trying to build a theatrical business,” but “trying to break through the noise.”

So, when will White Noise be streaming on Netflix? The film officially drops on Dec. 30, so you can look forward to watching it during a New Year’s movie marathon.

What Do The White Noise Reviews Say?

As of Dec. 1, White Noise currently has a 72% Tomatometer score on Rotten Tomatoes. A.O. Scott of The New York Times praised several performances in the film, writing that “Driver and Gerwig give warmth and texture to characters who were, in DeLillo’s pages, a little abstract.” But he also questioned the decision to keep White Noise in the ‘80s, explaining that the setting “inevitably blunts [the film]’s impact.”

Murtada Elfadl of The A.V. Club writes that Baumbach and DeLillo’s source material make “an uneasy alliance,” but praises the filmmaker’s “perceptive work with the actors [which] wrings pathos from within a fractured family,” similar to other films he’s done.

More like this
Here’s Everything Coming To & Leaving Netflix In February
By Jake Viswanath
'Knock At The Cabin' May Start Streaming Sooner Than You’d Think
By Jake Viswanath
Pamela Anderson Is Still A Hopeless Romantic
By Ilana Kaplan
Stephen Graham & Steve McQueen Are Working On A Wartime Drama
By Darshita Goyal
Get Even More From Bustle — Sign Up For The Newsletter
From hair trends to relationship advice, our daily newsletter has everything you need to sound like a person who’s on TikTok, even if you aren’t.