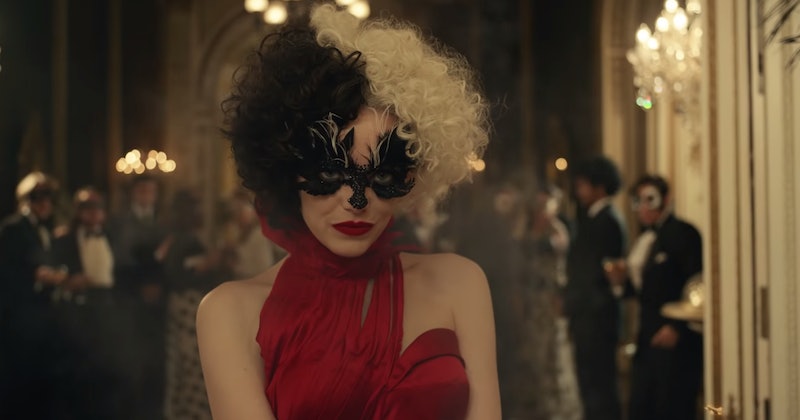 Cruella is set to send Disney fans wild this year. The prequel to 101 Dalmatians explores the origin story of iconic villain Cruella De Vil, stars Emma Stone, and is set in '70s London, making it a total must watch. Here's when you can expect it and how to watch Cruella in the UK.

As things stand, the major blockbuster is set released in cinemas across the nation. The film was actually due to be released on Jan. 1 2021 originally, but has now been moved back to May 28. We will have to see if plans go ahead for a cinema release, or if it will have to come direct to a streaming service such as Disney+.

In the mean time, we can enjoy the brand new trailer Disney has put out, which gives us a taste into the world of Cruella.

Filmed in 2019 in London, the movie will tell the tale of how Cruella came to be the baddie she is known as today. It is set in the 1970s, and has a "punk vibe" according to Hollywood Reporter. The movie synopsis describes it in the following words: “an all-new live-action feature film about the rebellious early days of one of cinemas most notorious – and notoriously fashionable – villains, the legendary Cruella de Vil.”

The film is directed by I, Tonya's Craig Gillespie, and stars Emma Stone as the lead, along with Emma Thompson as Cruella's boss. The cast list will also include Paul Walter Hauser, Joel Fry, Emily Beacham, Joel Fry, Kirby Howell-Baptiste and Mark Strong.

More like this
Yes, You Can Stream ‘To Leslie’ In The UK Now
By Sam Ramsden
Your Guide To Watching 'Everything Everywhere All At Once' In The UK
By El Hunt and Sophie McEvoy
Channing Tatum “Nearly Killed” Salma Hayek During 'Magic Mike' Lap Dance
By Sam Ramsden
Jemima Khan Used Her Own Life As Inspo For 'What’s Love Got To Do With It?'
By Darshita Goyal
Get The Very Best Of Bustle/UK
Sign up for Bustle UK's twice-weekly newsletter, featuring the latest must-watch TV, moving personal stories, and expert advice on the hottest viral buys.