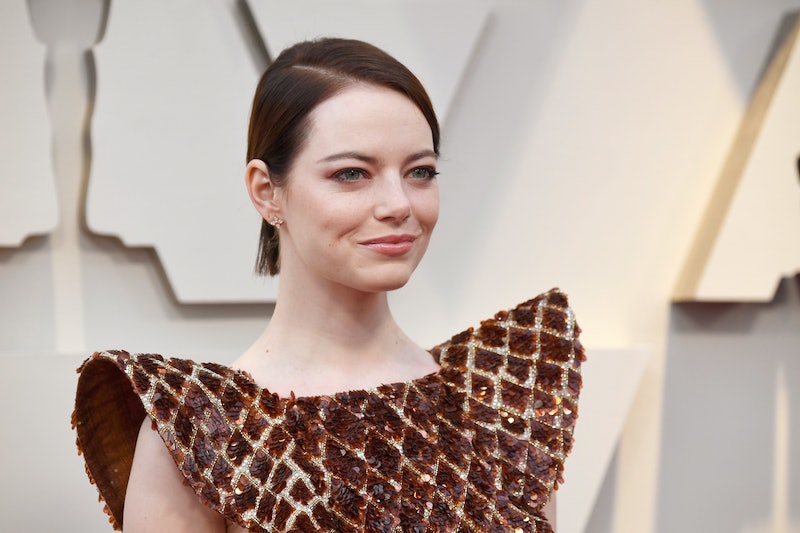 This Disney villain got a makeover. On Saturday, Aug. 24, Disney offered the first look at Emma Stone as Cruella de Vil in Cruella at the D23 expo, and fans can't get enough of the character's punk-rock reimagining. On Twitter, Disney shared a photo of Stone in costume as the iconic character, standing in front of a demolished building. The actor's hair is styled in de Vil's signature black and white color, and she holds three Dalmatian pups on a leash. In the background, an evil henchman, played by Paul Walter Hauser, sits on a motorcycle, while another, played by Joel Fry, looks on.

In addition to the first-look at the character, Disney shared cast details and a release date for the movie on Twitter. In the D23 tweet, the production company wrote:

Cruella will be an origin story for Cruella de Vil, according to The Hollywood Reporter. The iconic villain, best known for kidnapping Dalmatians to use their fur for coats and other accessories, first appeared in the 1961 animated film 101 Dalmatians. The latest version of the story will be set in the 1980s, and follow a younger, punk version of de Vil, per THR.

Stone won't be the first actor to bring the villain to the big screen — in 1996, Glenn Close portrayed Cruella de Vil in the live-action 101 Dalmatians, and her version of the evil fashion designer determined to steal Dalmatian puppies terrified audiences. In 2000, Close reprised the role for 102 Dalmations, a movie in which de Vil is released from prison and once again plots to steal Dalmatians.

Instead of remaking the original live-action films, Disney decided to go further back into de Vil's past, to reveal what led the villainous fashion designer to a life of pure evil. On Twitter, fans posted their excitement for the movie, and many people were thrilled by Stone's punk makeover. One fan tweeted, "This looks dark. Also, wow!! That's really Emma Stone? It doesn't look like her, that's kinda impressive!"

Several other fans expressed excitement about the movie on the social media platform. One person tweeted about the prequel, writing, "LOVE the look. Just for the love of god keep her evil and keep it fun. #Cruella." "Another fan wrote simply, "OHMYGOD," while another Disney fan added on Twitter, "MY GIIIIRL! I am SO STOKED we got this today. Cruella is gonna be set in 70’s London. That is an aesthetic I can GET DOWN WITH. Ugh. I love it. The fashion we’re gonna get from this. Wow. #d23expo #cruella"

Even more Twitter users chimed in to share their excitement for the release, and plenty of people were stunned by Stone's transformation:

Director Craig Gillespie, best known for I, Tonya, will be at the helm of Cruella. The movie was originally slated to for a Christmas 2020 release date, but Disney pushed the release date to May 28, 2021, according to Deadline. For anyone who grew up watching the original animated films or the live-action remake, this prequel is sure to be a spooky, punk rock addition to the series.