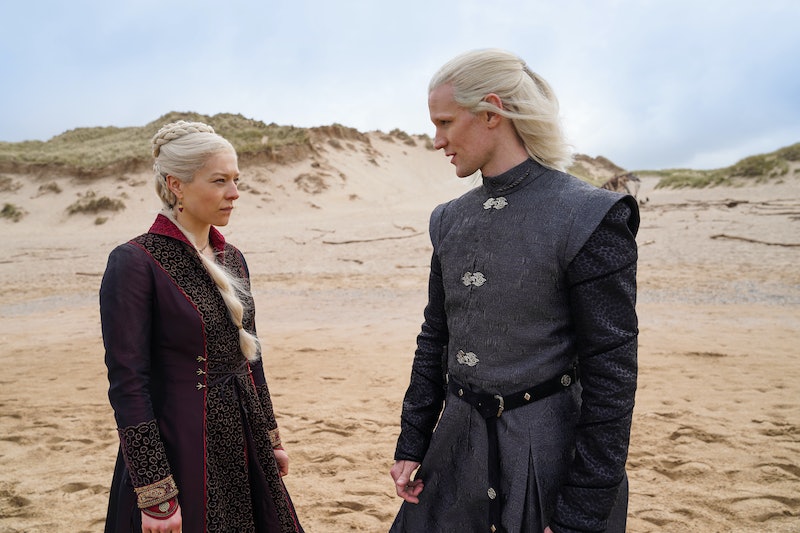 Based on George R. R. Martin’s Fire & Blood series, House Of The Dragon is the next big event for Game Of Thrones fans. Set 300 years before the storyline in the original series, the prequel will tell the story of the Targaryen civil war. Officially in production as of April 2021, the show now has a premiere date to look forward to as well. Here’s how to watch House Of The Dragon in the UK.

In a press release sent to Bustle, it was confirmed that House Of Dragon will debut on Sky Atlantic in August. Aug. 22, to be precise. And it will also be available to stream on NOW’s streaming service. So mark your calendars, people. New episodes will drop weekly from then on, and you’ll also be able to watch on demand as well as live. And, unlike other shows (looking at you Rick and Morty), we’ll be able to watch House Of The Dragon at the same time as the U.S. premiere.

If you can’t wait that long, the official House of the Dragon teaser trailer was released during the European launch of HBO Max on October 5. In May 2021, HBO also released a little sneak peek of its stars as their characters via the House of Dragon Twitter account.

The first photo sees Emma D’Arcy as Princess Rhaenyra Targaryen looking pensively at Matt Smith as Prince Daemon Targaryen, both with the striking icy blonde hair of the Valyarian family. Next, is a glimpse of Steve Toussaint as Lord Corlys Velaryon, otherwise known as The Sea Snake, followed by Olivia Cooke and Rhys Ifans as Alicent and Otto Hightower.

Filming of House of the Dragon took place in Cornwall in the summer of 2021. As Variety reported, production on the series was forced to shut down due to lockdown, but filming resumed shortly after. During filming, Smith and D’Arcy were spotted in costume at Holywell Bay near Newquay. According to Cornwall Live, crews were also seen building “mysterious archways” and medieval sets for the show as well. Film crews were also spotted at St Michael’s Mount which is a historic castle and island off the coast of Penzance. Just as areas in Northern Ireland have become a must-see tourist destination for GoT fans, Cornwall will almost certainly become a popular destination for HoD viewers in years to come.

House Of The Dragon will air in the UK on August 22 on Sky Atlantic and streaming service NOW.