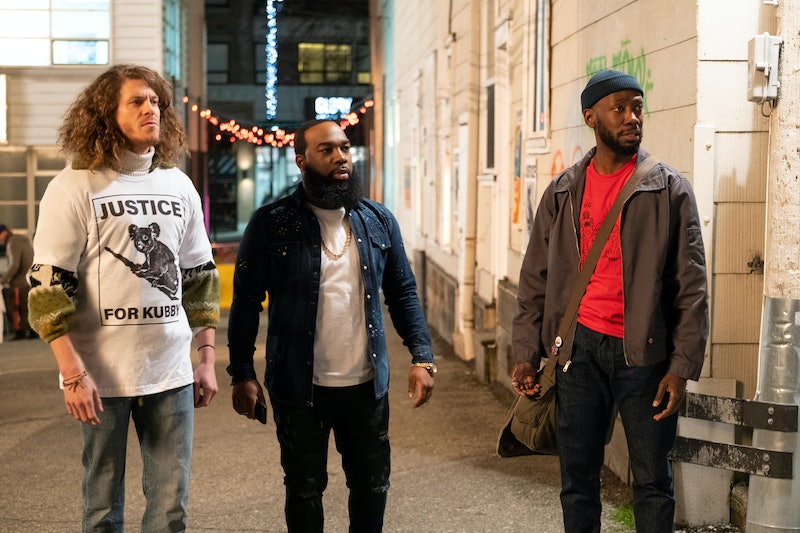 Tackling the subject of police brutality in a comedy series isn't an easy task, but the cast of Hulu's Woke is up to the challenge. Inspired by the life and work of artist Keith Knight, the hybrid live-action/animated Hulu series centers on San Francisco cartoonist Keef (New Girl's Lamorne Morris) whose life — and his outlook in general — begins to change course after he's racially profiled and attacked by the police because he "fit the description" of a suspect.

Since this is a TV show, becoming "woke" for Keef means that usually-inanimate objects begin talking and pointing out racial injustices in his everyday life. And those objects are voiced by some Hollywood heavy-hitters, too. They include: Toast and Butter (Tony Hale and Sam Richardson), a pair of 40-ounce malt liquor bottles (Nicole Byer and Eddie Griffin), a thoughtful garbage can (Cedric the Entertainer), a judgmental Sharpie (J.B. Smoove), and a T-shirt complaining about "this white woman inside of me" (Lil Rel Howery).

The live-action cast is at the core of the story, however. Get to know more about the group of actors from Woke Season 1 below.

Best known for playing Winston on Fox's New Girl for seven seasons, Morris stars as protagonist Keef, who was modeled after Keith Knight. "He's a middle of the road kind of guy, meaning politically he's a bit ambiguous, so he doesn't really take sides," Morris told TV Insider of Keef. "He just minds his own business, until one day something happens to him that causes him to see things clearer and a bit differently."

The Chicago-based comedian and actor Murph, whose credits include NBC's Chicago Fire and Comedy Central's Key and Peele, plays Keef's well-meaning friend and roommate Clovis. The "sunnily cynical player" is not always there for Keef in the same way as the other member of their trio, but he never fails trying to protect his money.

Anderson, who co-created, wrote, produced, and starred in Comedy Central's Workaholics, plays Keef and Clovis' third roommate Gunther. Trying to be the voice of reason, the character, whose idea for a start-up is selling “Peruvian coca” as a dietary supplement, wants to be available to Keef as he navigates the tough time in his life.

The former Saturday Night Live cast member plays a progressive activist and journalist who befriends Keef and gives him an outlet to publish social justice-themed cartoons. "I'm trying to bring him into my world because I recognize that he has a very powerful and prominent voice and he could be using that for good," Zamata explained to TV Insider.