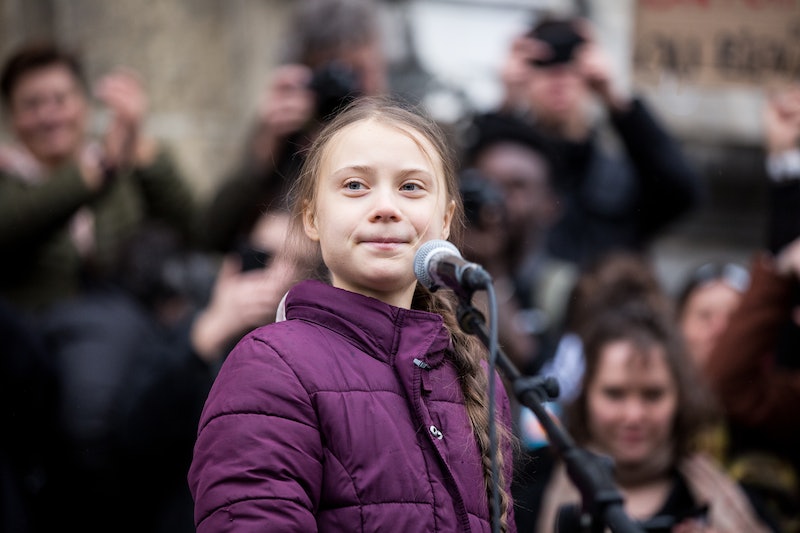 On its surface, Hulu’s new documentary I Am Greta chronicles the meteoric rise of teen climate activist Greta Thunberg: from her time spearheading a one-student strike against climate change to becoming the inadvertent — and somewhat reluctant — leader of a global youth movement. But barely five minutes into the film, Thunberg and director Nathan Grossman make it clear that her story isn’t complete unless her autism diagnosis is at its center. “Sometimes it feels like those of us with Asperger's or autism are the only ones who see through the static,” she muses. And that sentiment quickly becomes a mainstay of the film’s storytelling.

The fact that Thunberg, 17, is autistic — she identifies as being diagnosed with Asperger syndrome, though there’s controversy around the term's clinical use — isn’t necessarily new knowledge; she’s discussed it before on social media, calling the diagnosis her "superpower." However, as the film points out, the narrative around her Asperger's has often been publicly met with erasure, a lack of dimension, and ableism ranging from unintentionally patronizing to downright heinous. (One clip featured in the documentary shows a Fox News commentator referring to her as a “mentally ill Swedish child.”)

There’ve been recent strides for the autism community in pop culture, though with varying amounts of success. The Netflix show Atypical premiered in 2017 but was criticized by the autism community for its stereotypical portrayal of the condition and its lack of autistic actors. The same streaming service also distributed Australian reality show Love on the Spectrum in 2020, which received mixed reviews from viewers who were disappointed by moments that infantilized autistic daters. But through Grossman's choice to let Thunberg share her life with autism on her own terms —  the documentary serves as a masterclass in the strength of letting the autism community craft their own accounts.

Part of accurately portraying Thunberg's life was spotlighting her reliance on her parents, Svante Thunberg and Malena Ernman, as they help her navigate the world as a newfound public figure. But despite their close, nurturing relationship with their daughter, they never infantilize her or her ambitions. On occasion, she needs them to remind her to eat and take breaks when she gets into a "zone," but they never take away her autonomy in the process.

Then there are the quieter moments she must contend with on her own, like when Thunberg sees the negative press attention around her actions and, obviously impacted, processes it by spinning around a room. Later she's on the verge of tears while sailing through a rough patch on the high seas during her voyage from England to the United States to attend a United Nations summit.

Yet scattered throughout the film are also instances of pure joy, including Thunberg baking a cake that goes awry with her mother and laughing with her father on their endless road trips around Europe. As the audience, we get to see all of that nuance by viewing these instances through Thunberg’s eyes — and in turn we come to understand the power of observing the world with Thunberg's particular lens.

Nothing encapsulates this sentiment more than Thunberg’s concluding remarks as the documentary draws to a close. She’s in an open field in Sweden, taking comfort in petting horses, while ruminating on her work so far. “Sometimes I feel that it might be good if everyone had a tiny bit of Asperger's,” she notes about her wish for people to see certain issues in black and white, “at least when it comes to the climate.”