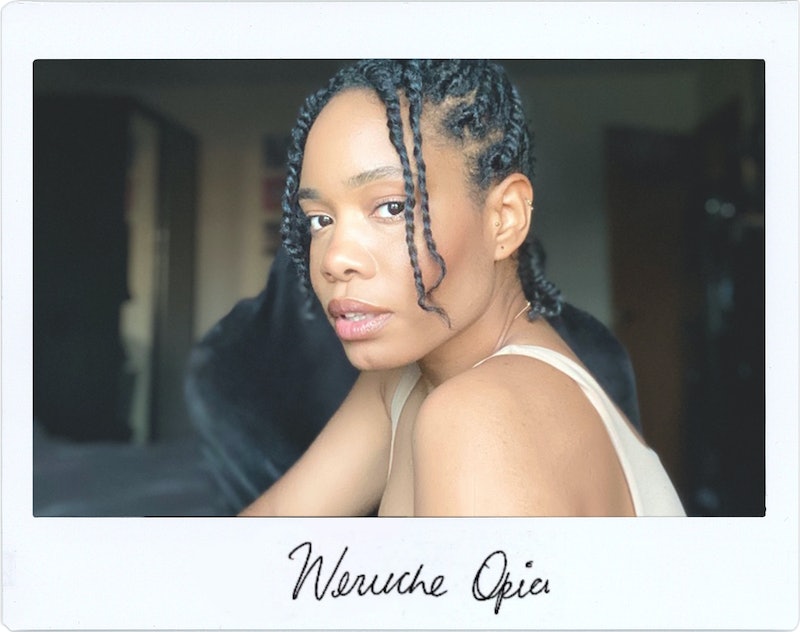 When celebrities (virtually) hang out with Bustle writers, we want to give them the chance to leave their mark. Literally. So we hand them a pen, a piece of paper, a few questions, and ask them to get creative. This time, I May Destroy You star Weruche Opia is leaving her mark in the Bustle Booth.

When Weruche Opia learned she'd been cast as Terry, the best friend to showrunner Michaela Coel's Arabella in HBO's I May Destroy You, the magnitude of her role didn't quite sink in. “I actually didn’t realize how big a deal it was,” the 32-year-old actor says. “And then I realized how much my character was actually in the show.” It fully dawned on her only when she showed up to a central London conference room — severely jet-lagged and battling first-day-of-school nerves — for the table read. “I saw my name was straight under Michaela’s and I was like, Hold on. This is for real."

By Opia’s account, it was immediately clear to the production team that Coel’s script, which looks starkly at modern mores of sex and consent, was a “game changer.” The cast read through all 12 emotionally devastating episodes one after another in just two days. But out of all that talking, what rocked Opia most was the quiet that followed. “There was complete silence in the room for probably about 30 seconds. I can't explain it, but it was just complete silence because everyone needed to take a moment to take it in.” She got goosebumps. “And then the applause started for another 20 or 30 seconds, because it was such an amazing piece to read.”

For Opia, whose filmography is dotted with smaller roles including runs on Bad Education and the original Top Boy, making I May Destroy You has been more than career-altering; it’s been eye-opening. Take, for example, the storyline where Arabella is assaulted when a colleague she’s sleeping with removes his condom without telling her. “The whole stealthing thing? I'd never heard of it before,” she says. “So I was learning about it on set, and I was thinking to myself, there will be people who've experienced this, but had no idea that it was sexual assault.”

Despite the recurrent theme of sexual assault, though, Opia sees the show as fundamentally grounded in friendship. “The connection that Terry, Kwame, and Arabella have and the fact that they have their own little unit? They're able to grow through their own situations, which is so hopeful to watch.” Really? I ask her, surprised to hear the word hopeful in connection with a show that seems determined to expose the worst of modern sex culture. But Opia doesn’t back down.

“I think as long as there's life, there's hope, that's how I see it,” Opia tells me, simultaneously reflecting on the challenges of 2020. “It's that survival thing that's just kicking in... that's how I've been seeing this year, and that's how I intend to go on. And that's how I see the characters as well, when I watch it and read it.”

More like this
'Bridgerton' S3 Will Show A *Very* Different Side To Kanthony
By Sam Ramsden
Twitter Is Burning As Phoebe Dynevor Reveals Daphne’s 'Bridgerton' Exit
By Sophie McEvoy
Helena Bonham Carter Doesn't Think 'The Crown' “Should Carry On"
By Sam Ramsden
A New Netflix Doc Will Explore The Unsolved Murder Of Jill Dando
By Sam Ramsden
Get Even More From Bustle — Sign Up For The Newsletter
From hair trends to relationship advice, our daily newsletter has everything you need to sound like a person who’s on TikTok, even if you aren’t.