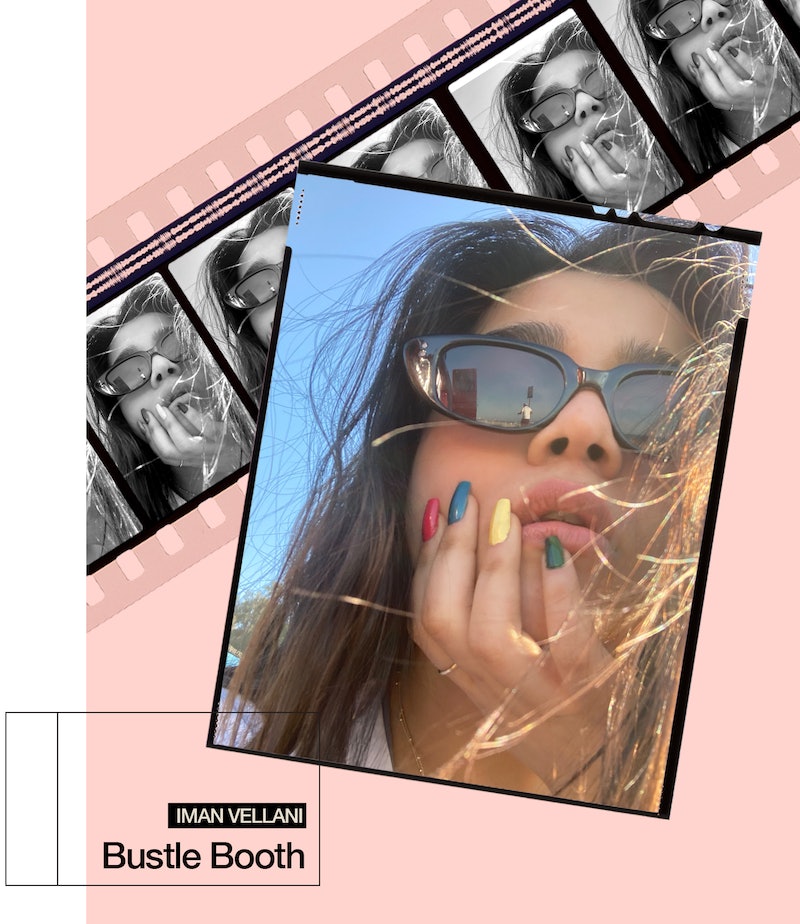 In high school, Iman Vellani did everything in her power to become “super artsy.” She developed a taste for classic films Singing in the Rain and Harold and Maude — plus contemporary gems like Mamma Mia — and a love of the French auteur Agnes Varda. She created her own short films and shared them on Vimeo, earned a coveted spot on the Toronto International Film Festival’s (TIFF) Next Wave Committee, and published some delightfully snarky criticism on Letterboxd. (Pity those reviewed by Vellani and found wanting, like The Kissing Booth 2: She’s “read better wattpad stories.”)

But even as she cultivated her passions, she was still wrestling with her identity. “I honestly grew up feeling quite disconnected from being Pakistani and being Muslim, which was super strange because I went to mosque. I grew up with all four of my grandparents. I watched Bollywood movies,” the 19-year-old actor tells Bustle, admitting she “never thought it was cool enough, quite frankly.” Her culture and her interests felt like two things that “never went hand in hand” — until her aunt heard about a local audition for Ms. Marvel and passed it along via WhatsApp. Against all odds, the high schooler from Markham, Ontario, landed the part, becoming the MCU’s first Muslim and Pakistani American character.

It probably helped that Vellani has so much in common with the super-powered teen. Like Vellani, Kamala Khan is something of a homespun filmmaker who harbors a passionate love of all things Marvel. (Vellani’s MCU fandom knows no boundaries — except maybe regarding Captain Marvel, which earned a measly 2.5 stars on her Letterboxd: “These stars are not for Brie Larson, I will sacrifice my own life…for Brie Larson,” she wrote. Ironically, Vellani’s starring in the sequel.) Ms. Marvel’s set designers even copied some of Vellani’s own Avengers paraphernalia for Kamala’s bedroom, including an Iron Man cologne that “does not smell good.”

Kamala’s journey to reconnect with her heritage — jumpstarted when she tries on her great-grandmother’s bangle, which awakens her cosmic powers — also reflects Vellani’s own. On set, the 19-year-old found herself surrounded by “an insane amount of brown people and Muslims and South Asians,” like Ms. Marvel producer Sana Amanat, writer Bisha K. Ali, and the diverse cast that makes up Kamala’s Pakistani community. “Seeing how much of their culture and their pasts that they've brought into making our show inspired me, and made me want to reconnect with my culture,” Vellani says. Though she first balked at wearing Kamala’s more “traditional outfits,” by the end of production, she’d fallen in love with them.

Vellani has also found an ally in Never Have I Ever’s Maitreiyi Ramakrishnan, who had a similarly meteoric rise to fame. After meeting and exchanging numbers at the Toronto International Film Festival, they went to grab shawarma and “talked for like five hours straight without breathing, just throwing stories at each other,” Vellani says. “It was so comforting to have her because I felt so lonely. We’ve had a very similar experience, and it’s really great to have someone like her by my side.” If the MCU’s taught us anything, it’s the power of a good team-up.

Get to know more about Vellani — including her favorite Gandalf quote — in her Bustle Booth questionnaire below.

I’m a Leo — but my moon and rising sign is Libra, so that should say something.

“Fly, you fools!” from Gandalf [in The Fellowship of the Ring].

SpongeBob!! It still is.

BoJack Horseman always, but currently it’s Barry and The Kardashians.

It has got to be Robert Downey Jr., duh.

“We Didn’t Start the Fire” by Billy Joel.

The Adventures of Shark Boy and Lava Girl Letterboxd reviews.

What’s something you want people to say about you?

I’m not sure. I think people should say what they want.

More like this
On 'Industry,' Marisa Abela Takes Control
By Morgan Leigh Davies
'The Sandman’s Ending Is A Departure From Neil Gaiman’s Comic Book Series
By Kadin Burnett
In Rap Sh!t, Social Media Has Main Character Energy
By Aramide Tinubu
At 28, Tisha Campbell Was Newly Married & Dancing Through A Career Pivot
By Grace Wehniainen
Get Even More From Bustle — Sign Up For The Newsletter