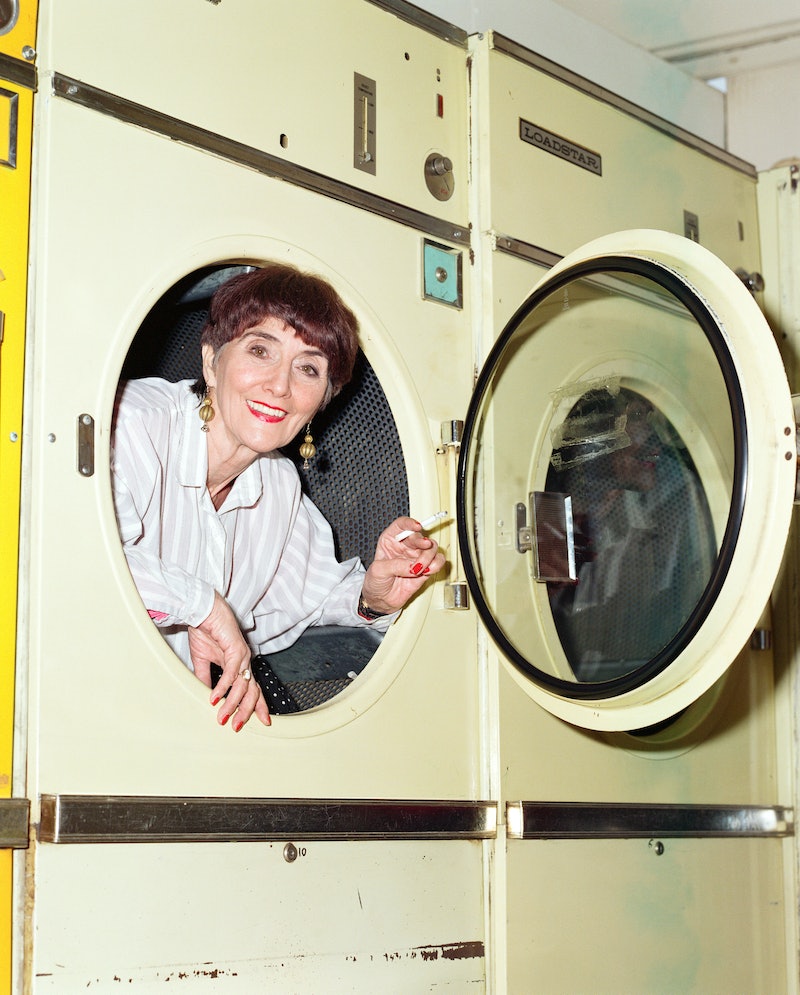 When she wasn’t lighting her fifteenth cigarette of the day or reciting passages from the Bible by heart, EastEnders’ legend and high-camp icon Dot Cotton is best remembered for one notorious catchphrase. “I ain’t one to gossip, but…” As any fan of the long-running London soap will know, Dot was lying: she loved nothing more than the thrill of a fresh new scandal whipping around the edges of Albert Square. She once relished the chance to wallop Pat Butcher across the face in the middle of the Queen Vic, even.

Dot was played to perfection by the late June Brown, who died on Apr. 4, 2022, aged 95. When Brown wasn’t portraying one of EastEnders’ best-loved and longest serving characters, the actor could be spotted drinking wine with members of Manic Street Preachers in Elstree Studios’ on-site pub (according to BBC Radio 1’s Scott Mills) and befriending Lady Gaga on the Graham Norton show. “There is not a lot of me in Dot I don't think. She's got a high opinion of herself and I don't think I have,” Brown later said in BBC One’s tribute programme June Brown At 90: A Walford Legend. "In my life, and Dot Cotton certainly wasn't like this,” she quipped, “I did have a lot of love affairs."

Following the news of her passing, EastEnders co-stars past and present have paid tribute to a National Treasure. “They never made you a Dame (we did try), but to me you will always be Dame Brown,” wrote Adam Woodyatt, who played Ian Beale. “Rest in peace June,” wrote Danny Dyer, who shared a snap of his character Mick Carter shaking hands with Dot. So privileged to have graced the screen with ya. An icon in its truest form.”

A true legend, both on and off screen. Here’s a look back at some of Dot Cotton’s greatest moments of all, in tribute.

What better place to begin than Dot Cotton’s first ever EastEnders scene, back in 1985? The chain-smoking ruler of Walford’s laundrette would go on to become one of the soap’s longest serving characters of all time, but here, we see her clattering into the local cafe for the very first time to demand paracetamol off a fresh-faced young Ian Beale. It’s the essence of Dot Cotton distilled into a single moment: a slightly flapping hypochondriac with a stern side, scolding locals for cursing, and sulking in the corner. “How’s your back Dot,” asked Arthur Fowler. “Oh don’t ask! Unless you’ve got two hours…”

Over the years, Albert Square has taken a proper pummelling – most buildings have survived at least one arson attack. We’ve seen everything from Janine hurling Barry down a hill to a double-decker bus careering through the middle of the market. But if it’s high octane stunts you’re after, EastEnders clearly has the capacity. Somehow all of this makes Dot Cotton’s infamous “car crash” (in which her Smart Car gracefully swerves off the road before rolling to a very controlled stop) even more of a camp masterpiece.

Though she was best known for taking care of Walford’s dirty laundry, Dot also had a gloriously brief stint working behind the counter at the square’s video shop in 1997, which came to a rapid end after a punter tries to hire out a smutty VHS called Bodies in Unison. “Oh I say!” she exclaims in horror. “It’s disgusting!”

Her Well-Documented Fear Of Computers

A God-fearing woman, Dot might’ve enjoyed an honest ciggie every now and again (well, in virtually every scene) but dabbling in recreational drugs was firmly against her morals. Unfortunately, she hadn’t accounted for the fact that her beloved tea – purchased from “some woman” from the Square in 1997 – was laced with copious amounts of marijuana, leading to a giddy encounter with a local policeman, and her eventual arrest for brewing up cups of weed tea. As it happened, June Brown was far more partial to puffing on the devil’s lettuce. “I tried marijuana and it had the most incredible effect on me,” she later told Happy Mondays singer Shaun Ryder. "I never got addicted to it. The only thing I am addicted to is my cigarettes.”

Her infamous arrest for cannabis possession wasn’t Dot’s first brush with the rozzers, however, and during a high-stakes plot-line in 2017 revolving around the murder of Ian’s daughter Lucy Beale, Dot dramatically turned herself into the police for the murder of her good-for-nothing son Nick. The unwieldy camera angle used to show Dot being whisked away to the station prompted countless memes about accidentally opening up your phone camera in selfie mode, not to mention a passionate new movement fans dubbed #FreeDot.

This Cringe Encounter With Jane Beale

Twenty-four years after her very first scene opposite Adam Woodyatt (who plays Ian Beale) Dot’s face was a picture when she walked in on Ian’s fourth and fifth wife, Jane, performing a raunchy pole dancing routine for his birthday. Making the whole thing even more absurd? Jane’s seductive song of choice is “Dance Wiv M” by Dizzee Rascal. May the Lord preserve us all!

June Brown made TV history in 2008 when she performed a captivating 28-minute monologue that filled an entire episode – Pretty Baby… was the very first soap opera instalment to feature just one character, and bagged Brown a BAFTA nomination for Best Actress. In all honesty, she deserved to win it. Reflecting on her past in a message for her husband Jim Branning as he recovers in hospital from a stroke, the scene was all the more touching because John Bardon (who played Branning) was also recovering from a stroke in real-life. “I know it's silly remembering such a little thing,” she says, after singing the song Jim used to sing to her. “But when I look back I know that from that moment on, everything I’ve ever cared about, I’ve lost.”