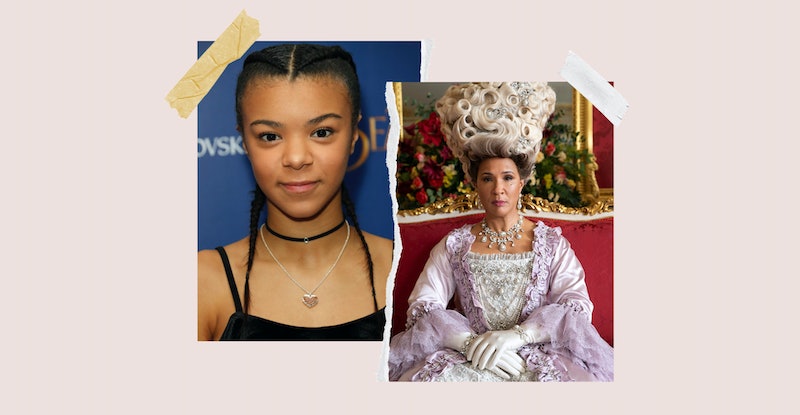 Fans found out a prequel was in the works last year. And now, more details have started rolling in. The eight-part series will be based on a young Queen Charlotte, long before the events of Bridgerton. Stepping into these shoes, India Amarteifio will take on her first lead role.

Previously, she played the daughter of DCI Roz Huntley (Thandie Newton), in Line of Duty’s fourth season. We’ve also seen the young actress in Sex Education, as Lizzie, and in Doctor Who, as the magician’s apprentice, Alison. She’s also enjoyed supporting roles in Military Wives, Unforgotten, The Tunnel, and The Evermore Chronicles.

Now, Amarteifio will be portraying the younger version of Golda Rosheuvel’s Queen Charlotte.

The upcoming show follows the young queen’s love life, and her journey from outsider to a position of extreme power, per Variety. Against her will, she’s betrothed to the King of England, who she’s never met. Once she arrives in London, she’s not what anyone expected. But she navigates The Ton, and palace on her own terms.

Amarteifio confirmed the news on Instagram, with a black and white photo of herself and Rosheuvel. “No words, really. Thank you to my secret keepers for keeping it a secret. Absolute honour,” she wrote. Meanwhile, the official Shondaland account commented “Welcome to the family!”

So far, Amarteifio’s Instagram profile and her private life have flown under the radar. A low profile talent behind a star role is quite refreshing, actually. A bit mysterious, even, which only adds to the anticipation. But that could be about to change.

Amarteifio will also star in Sky Original Drama The Midwich Cuckoos, so you can expect to see plenty more of her in the future.

More like this
Everything To Know About The 'Daisy Jones & The Six' TV Series
By Maxine Harrison and Brad Witter
The Song At The End Of 'The Last Of Us' Ep 1 Has A Deeper Meaning
By Sophie McEvoy
Twitter Is Burning As Phoebe Dynevor Reveals Daphne’s 'Bridgerton' Exit
By Sophie McEvoy
Helena Bonham Carter Doesn't Think 'The Crown' “Should Carry On"
By Sam Ramsden
Get The Very Best Of Bustle/UK
Sign up for Bustle UK's twice-weekly newsletter, featuring the latest must-watch TV, moving personal stories, and expert advice on the hottest viral buys.