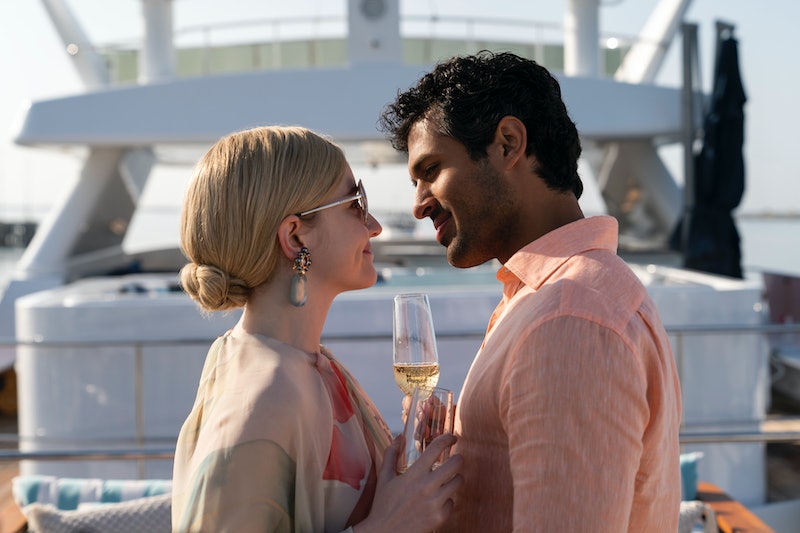 As Netflix’s Inventing Anna hits our screens, there are a lot of questions floating around about what is based on fact or made up for entertainment value. The limited series documents the life of fake German heiress Anna Delvey, who is uncovered as serial fraudster Anna Sorokin. And viewers are unpicking which characters are real and who is part of the fictional noise. One character that is on everybody’s lips is Anna Delvey’s boyfriend Chase Sikorski, played by Saamer Usmani (What/If). But is he based on Anna’s IRL boyfriend?

Well, it’s complicated. Some characters’ authenticity are easier to discern than others. For example, Vivian Kent is firmly based on journalist Jessica Pressler, as is Neff, Delvey’s BFF. Val & Nora Radford on the other hand are entirely fabricated characters, albeit loosely based on the kinds of people the Delvey would have come across. Then there are others who live in the grey area of fictional and real – including boyfriend Chase. In the show, he appears in three of the nine episodes in which his and Sorokin’s relationship is covered in great detail. As the aspiring tech millionaire vies for Sorokin’s affection, Kent starts to have suspicions that he too is involved in Sorokin’s schemes.

Some of Chase’s character seems to have been directly inspired from a section of the original article published in New York Magazine, written by Pressler. Describing Sorokin’s boyfriend, Pressler wrote:

“A futurist on the TED-Talks circuit who’d been profiled in The New Yorker. For about two years, they’d been kind of like a team, showing up in places frequented by the itinerant wealthy, living out of fancy hotels and hosting sceney dinners where the Futurist talked up his app and Delvey spoke of the private club she wanted to open once she turned 25 and came into her trust fund. Then it was 2016. The Futurist, whose app never materialized, moved to the Emirates, and Anna came to New York on her own…”

At the time, internet sleuths immediately began investigating the theories as to who this failed “Futurist” was. Using clues “Futurist”, “profiled in New Yorker” and “moved to Emirates”, the hunt began. Names on their shortlist included David Shing (aka Shingy), who held senior positions in AOL, and tech inventor Ray Kurzweil, as well as his son, Ethan Kurzweil. Hunter Lee Soik, a Korean-born creative raised in the U.S. and who eventually moved to (you guessed it) the Emirates, is another candidate on the list of Delvey’s potential boyfriends, though it has never been confirmed.

Soik has also been profiled in the New Yorker, done TED talks, and at one point was even spotted on Sorokin’s social media. His app , Shadow., a dream database much like Chase’s “Wake” in the show, also failed to launch. So while Delvey’s boyfriend does exist, Chase’s character is much bigger than what appears on the page, or the screen.

More like this
Everything To Know About The 'Daisy Jones & The Six' TV Series
By Maxine Harrison and Brad Witter
The Song At The End Of 'The Last Of Us' Ep 1 Has A Deeper Meaning
By Sophie McEvoy
A New Netflix Doc Will Explore The Unsolved Murder Of Jill Dando
By Sam Ramsden
'Brookside' Is Coming Back & Soap Opera Fans Are Going Wild
By Sam Ramsden
Get The Very Best Of Bustle/UK
Sign up for Bustle UK's twice-weekly newsletter, featuring the latest must-watch TV, moving personal stories, and expert advice on the hottest viral buys.