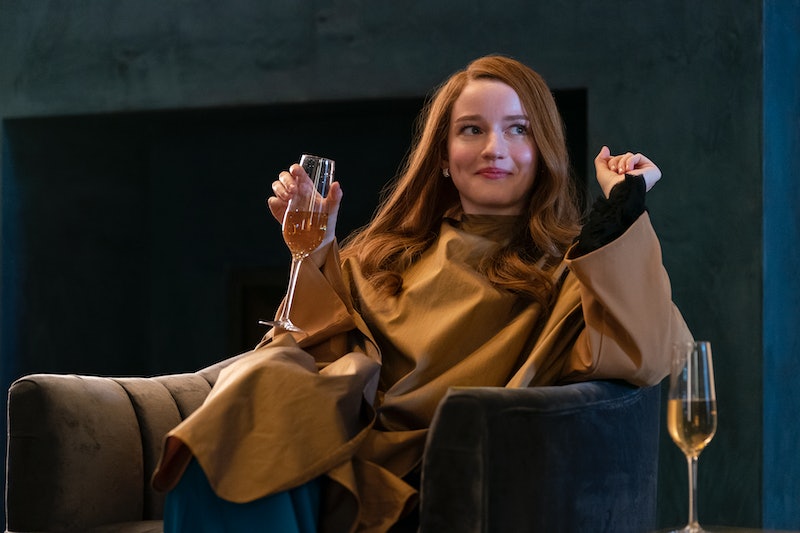 What is it about grifters and scam artists that audiences can't get enough of? From the infamous Fyre Festival, which spawned two documentaries, to the fictionalized (yet familiar) swindlers in Kajillionaire, the film and TV industry is fertile terrain for stories of scams gone wrong. The latest entry to the canon of con will be particularly intriguing to fans of Shondaland mainstays like Grey's Anatomy or Bridgerton. Shonda Rhimes is producing the series Inventing Anna — the true story of New York scammer Anna Sorokin, who defrauded friends and hotels while riding on her reputation as a mysteriously wealthy young woman. Netflix just released its first official trailer, so here's what you need to know about the upcoming show:

The upcoming series will center on the Russian-born German woman who went by the pseudonym of Anna Delvey and the legal woes that followed once her scam collapsed. It's based on the article “How Anna Delvey Tricked New York's Party People” written by Jessica Pressler, who also serves as a producer on the TV project. In addition to following her rise and fall as a pseudo-heiress, Inventing Anna will offer insight into the “dark, funny, love-hate bond” shared by Sorokin and Pressler over the duration of her reporting.

This isn’t the first New York Magazine investigation by Pressler to land an on-screen adaptation. In 2019, her article “The Hustlers at Scores” was turned into the star-studded Hustlers starring Jennifer Lopez and Constance Wu. Considering Hustlers turned out to be a hit and Pressler's articles serve as excellent source material, this show should be a fan favorite.

Viewers will recognize Ozark’s Julia Garner as the titular character. Viewers are sure to know several more familiar faces, too, including Laverne Cox as Kacy, Sorokin's life coach, and Anna Chlumsky as Vivian, the reporter investigating her story. Additionally, The Bold Type’s Alexis Floyd will appear as Neff, Sorokin's concierge-turned-friend and an unwitting observer of some of her scams.

To help inform her role and portrayal of Sorokin, Garner met with her at Rikers Island, where she's currently serving time. Garner described the trip to The Wall Street Journal, noting that it was important for her to not totally dislike the woman she was portraying. “The only thing that I didn't expect is that Anna is really funny. She's actually hysterical. And she's super soft-spoken and gentle,” Garner said.

In an interview with The Hollywood Reporter, one of the series’ directors and newly appointed Head of Creative Production Tom Verica addressed the tricky realities of filming a series (especially one set in bustling New York) during COVID. “We’re getting creative with lenses and situations, and the writers have been great in assisting us on things that are really challenging,” said Verica, who also directed several episodes of Bridgerton. “But there are certain necessities that we need, where they just have to be bigger pieces ... So, it's nothing new, it just becomes more work and more time. You can't spit out eight pages a day. That's not happening anymore.”

While the pandemic has affected how the crew approaches filming, it sounds like the production schedule is still on track.

Alongside a teaser clip released on Nov. 22 featuring a glimpse into Sorokin’s pseudo-glamorous lifestyle and its subsequent crumbling, Netflix revealed Inventing Anna will premiere on Feb. 11, 2022.

On Jan. 14, Netflix released the first official trailer for Inventing Anna, and it’ll immediately hook you on the story of the woman who was deemed “everything that is wrong with America right now.”

As is the case with Fyre Festival and the two upcoming series about the rise and fall of WeWork, Sorokin's story was apparently juicy enough to warrant two adaptations. Girls star and creator Lena Dunham will co-write an HBO project based on Rachel Williams, one of the people defrauded by Sorokin. Details for this particular project have not yet been released, but just know there's more Sorokin content on the way.