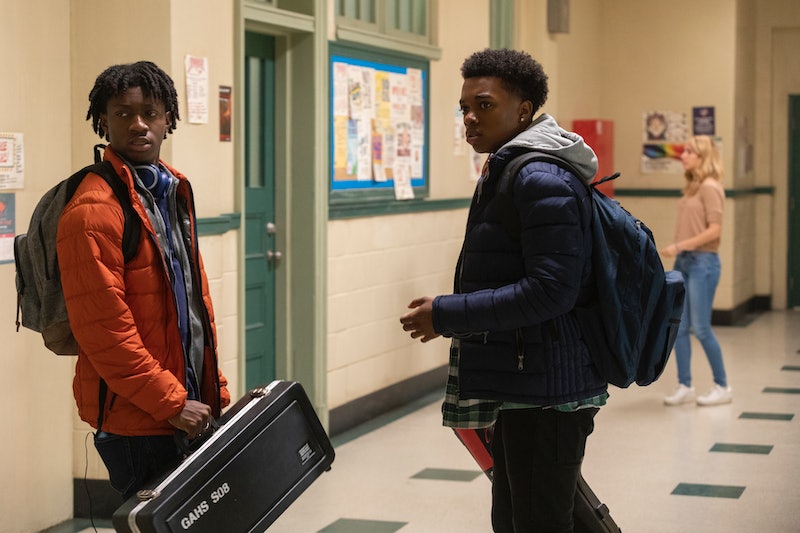 Netflix's new teen show Grand Army is set at Grand Army High in Brooklyn, New York. It's not a real school, but the show is grounded in reality. Throughout its first season, the characters deal with a number of heavy issues relevant to real teens, including racism, intersectionality, sexual assault, homophobia, and the school-to-prison pipeline.

This is an expansion of the play Grand Army is based on, Slut, which follows teens grappling with the topic of sexual assault. Co-playwright Meg McInerney told the New York Post that Slut was inspired by the real stories of people in the New York-based Arts Effect All-Girl Theater Company. "Scarily, the events in it are really universal," she said. Having the events take place at a fictional high school helps to keep that universality intact, reminding viewers that this kind of stuff happens everywhere — not just at one specific school.

Still, Grand Army High does share some attributes with a real Brooklyn school. According to Vanity Fair, Brooklyn Technical High School is the largest New York City public high school and is considered quite prestigious, similar to Grand Army High. The students also represent a cross-section of New York City, coming from the Lower East Side, Queens, the Upper West Side, Spanish Harlem, and Brooklyn.

And of course, Grand Army is named after a real place in New York City: Grand Army Plaza, the arched main entrance to Brooklyn's Prospect Park. The actual plaza plays a role in the show as well: the series taped on location in New York City as well as in Toronto, Canada.