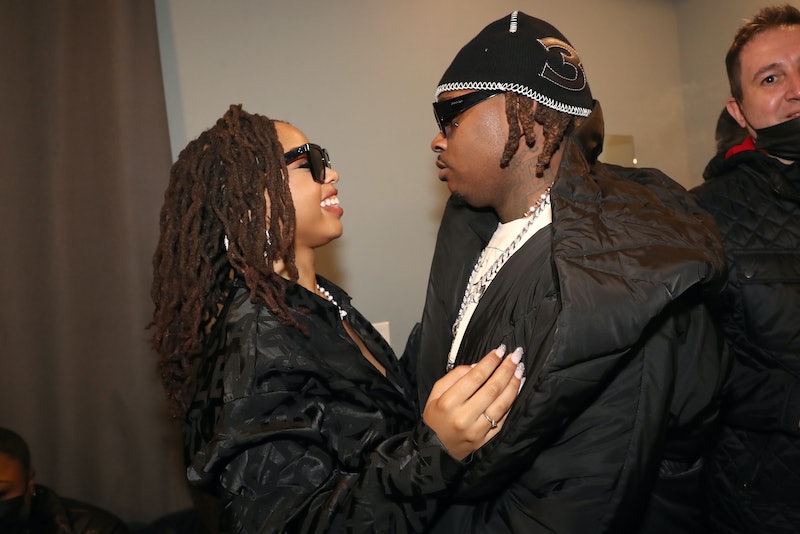 Rumors have been swirling about Gunna and Chloe Bailey for months. The Atlanta rapper and “Have Mercy” singer have been linked since October 2021, when they were photographed together at a basketball game supporting Gunna’s hometown Atlanta Hawks. The team even tweeted a picture of the pair sitting in the crowd from their official account. But when Gunna was asked about the outing by Billboard a month later, he smiled and said cooly, "Yeah, we're not dating. That was just, like, a date though, where you just go to the game and catch a vibe."

The not-dating-date at the Hawks game turned out to be the first of several for the pair. In January 2022, Gunna and Bailey were spotted again, this time holding hands as they left a Lakers game in Los Angeles. A video shows the two attempting to navigate the crowds of a hectic Crypto.com Arena, in an attempt to both greet fans and exit the venue.

Gunna addressed the dating rumors once again while promoting his then-unreleased album on The Breakfast Club a week later. He downplayed speculation about a budding relationship, explaining that they’d connected after Gunna started “shooting [his] shot a little bit” but insisting, “We’re really close friends, we got a hit song together.” Gunna did, however, confess that he wouldn’t be thrilled if Bailey started dating someone else. “It wouldn’t be very [playa] of her, to take my time and waste it,” he said. “I, for sure, would keep it [playa] if she moved on, but I wouldn't like that, no."

Bailey also addressed the dating rumors on an Instagram live around the same time. Despite engaging in a moderate amount of PDA with Gunna, she let her followers know she wasn’t focused on romance right now. “I feel like everybody wants to know about my love life. My love life is music, darling,” she said, per Complex. Nonetheless, she and Gunna were photographed holding hands in West Hollywood again the next month. According to Hollywood Life, the photo was snapped after a quick shopping trip.

Neither artist has made their relationship Instagram official. In fact, the only thing they’ve posted about each other online is promotion for their song. In February, Gunna posted a screenshot from his and Bailey’s music video “You & Me” depicting him and Bailey on a couch. Bailey also posted a clip from the music video with the caption, “you & me video out now,” followed by about a dozen lovey-dovey emojis. Perhaps she’ll make an appearance during Gunna’s upcoming Saturday Night Live performance.